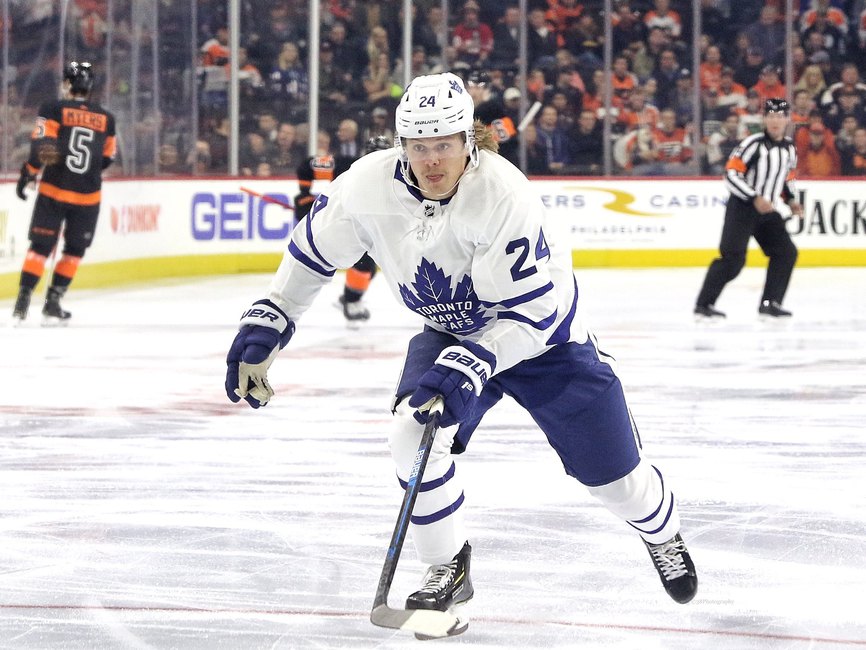 It was another night at the office for the Pittsburgh Penguins on Tuesday as they took on the rival Philadelphia Flyers. While there are certainly several storylines from the game to zone in on, one player who is standing out above the rest at the moment is Kasperi Kapanen.

The speedy winger has been dealt with his fair share of drama already this season and has come out the other end nicely. From having Visa problems with the United States border and delaying his arrival, to being called out by his head coach and benched during games, there have already been some rough patches for the 24-year-old native of Finland. Kapanen showed once again on Tuesday night he’s able to get past the adversity and be a key contributor to this Penguins team.

During Tuesday’s game against the Flyers, Kapanen was able to get in the passing lane in his own zone and use his speed to get a step on the Flyers defender. He then decided to use the “fake-clapper” on Flyers goaltender Carter Hart and was able to get the goalie to flinch, move laterally, and snuck the puck under his five-hole for a pretty goal. Turns out Kapanen had some inspiration for the move as his old Toronto Maple Leafs teammate, Jason Spezza pulled off a similar move last Saturday and the Penguins forward decided it was the perfect chance to give it a try. He admitted after the game that “the Big Daddy himself” was indeed his motivation for the move, even though Spezza’s was admittedly way nicer to watch.

Kapanen went on to score on the power-play roughly five minutes later for his second goal of the night and fifth on the season and was named the game’s first star. So far this season he’s recorded five goals, seven assists for 12 points and one number that surely stands out is his plus 10 rating. Kapanen leads the Penguins in this category and has come a long way with his development on both sides of the puck.

It was the same old story for the Penguins on Tuesday as they once again gave up the first goal. This has been a theme for the team this season and they’ve luckily been able to pull out some victories from behind. Head coach Mike Sullivan is going to need to do a better job of getting his team to start on time. Eventually, their luck will run dry and you can’t keep coming back from behind, especially in the playoffs. For now, the team should be commended for their efforts as the Penguins lead the league in come-from-behind victories.

Perhaps this win was inspired by the fans, as Tuesday’s game was the first time the team was able to host an audience. Statewide COVID restrictions were eased at the beginning of the month and spectators were allowed into the building. Penguins’ players raised their sticks and saluted the fans in attendance following the win.

Back to Kapanen, with Jason Zucker likely done for the season, it’s going to be vital for this Penguins team to keep getting the most out of him. He’s averaged 15:42 of ice-time so far this season which ranks him 14th on the team, so with him producing the way he has been, Sullivan should considering boosting this number. Kapanen’s speed allows him to be an elite penalty killer but his offensive instincts and his finishing ability are capable of producing more on the power play and five-on-five. He’s on pace for career highs when it comes to points-per-game and shooting percentage so if given the opportunity, we could see Kapanen evolve into a legitimate top-six forward for the Penguins.

The Penguins will take Wednesday to rest and on Thursday will once again take on the Flyers. The team currently sits 12-8-1 which is good for a tie for the fourth spot in the East division, with you guessed it, the Flyers themselves. While you can’t make the playoffs in March, you can play your way out of them. This new alignment for this season makes things far more interesting against your divisional matchups and it will be important for the Penguins to show up on time and be ready for another tough task.

Hopefully, Kapanen watches the Maple Leafs and Edmonton Oilers game on his day off and finds another ex-teammate for some inspiration. It seems to be working out just fine.