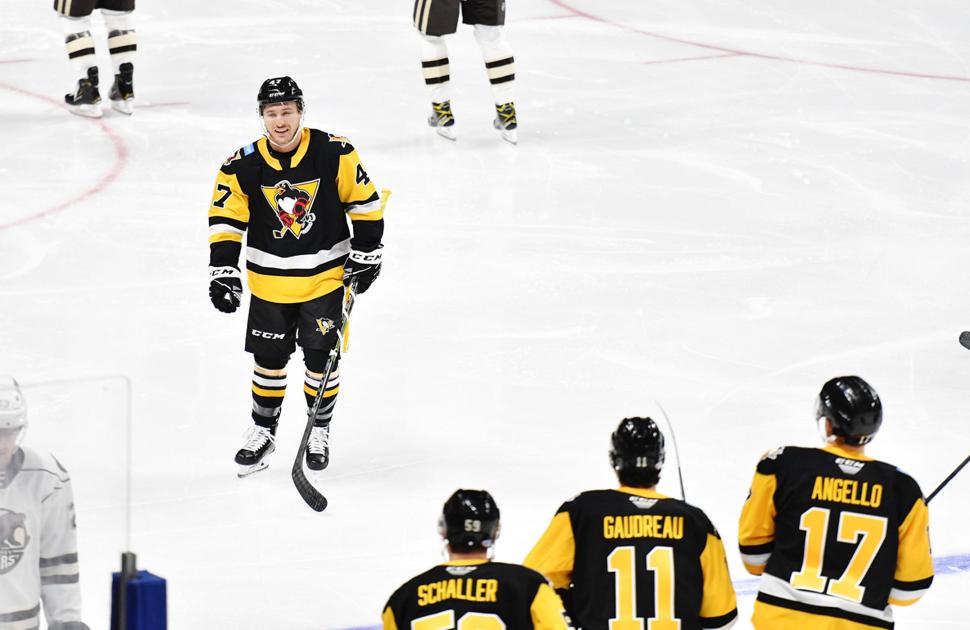 Schilkey, now 26, played under the former Penguins head coach in Charlotte from 2017-19, going from a rookie trying to earn his stripes in the AHL to key contributor for the still-defending Calder Cup champions.

“It took me some time to kind of become a regular in the league, and Mike was a big part of allowing me to grow,” Schilkey said. “He was really honest with me from the start. We had such a mature team, and I think he complemented that really well.”

Not surprisingly, a potential reunion with Vellucci was one of the reasons Schilkey signed with Wilkes-Barre/Scranton last summer. And while that didn’t materialize once the coach was promoted to Pittsburgh’s bench, it’s clear his influence is still paying dividends.

Schilkey has taken advantage of an expanded role with the Penguins among the top six and power-play units to lead the team in points through six games (G-5A), providing a boost with NHL-contracted players like Josh Currie, Anthony Angello and Jordy Bellerive shuffled back and forth between the AHL and Pittsburgh’s taxi squad.

And although his career is still relatively young, this being only his fourth pro season, Schilkey’s experience with that juggernaut Charlotte group is valuable to a team relying on a lot of rookies in the lineup.

“He’s got a lot of playmaking ability,” Penguins head coach J.D. Forrest said. “A lot of 2-on-1s. He’s smart — he plays on the right side of things. He uses the skill when he has to, and he’s been a good addition to our organization.”

It’s been a fun start for Schilkey after what was a trying season with Bridgeport in 2019-20.

The Sound Tigers were the league’s worst team by point percentage at 23-33-5-2 and scored a league-low 152 goals. Schilkey, coming of a 37-point campaign, saw his production dip to only 22 points, albeit in 15 fewer games played.

Then, of course, the league went on hiatus because of the pandemic.

“Definitely frustrating at times.” Schilkey said. “I mean, I definitely enjoyed my time there. Living there was awesome. The guys were great, just something about the way how he always felt like there was a little bit more that wasn’t going our way.

“At the same time, a lot of things that I learned the last few years going from the best team to one that was struggling to get wins every night. I look back and those are all growing opportunities. I learned a lot from both. All those are things I lean on.”

In addition to his speed and acumen, the 5-foot-10 Schilkey can bring intangibles to a locker room. The Michigan native was a two-year captain in college for the Buckeyes, helping them break a seven-year NCAA tournament drought his senior season. He easily led the team in scoring as well with 27 goals.

He said providing leadership has always been something he considers important, and he hopes to find more ways to do that for the young Penguins as the season continues.

Lately, he’s helped linemates Felix Robert and Radim Zohorna emerge with two of their best games of the year, both wins for Wilkes-Barre/Scranton over in-state rivals.

One of the things driving Schilkey is that he has yet to earn an NHL contract. Although he doesn’t think about that fact every day, he feels he has been close to an opportunity.

His hot start with the Penguins can only help in that endeavor, and he believes he has the coaching staff and teammates to help him achieve that goal.

“One of the first things (Vellucci) said when he went up to Pittsburgh was the team’s in great hands, and he’s absolutely right,” Schilkey said. “With JD here, it’s been awesome so far. J.D.’s been great with us and, just really excited to continue growing along with him now.”