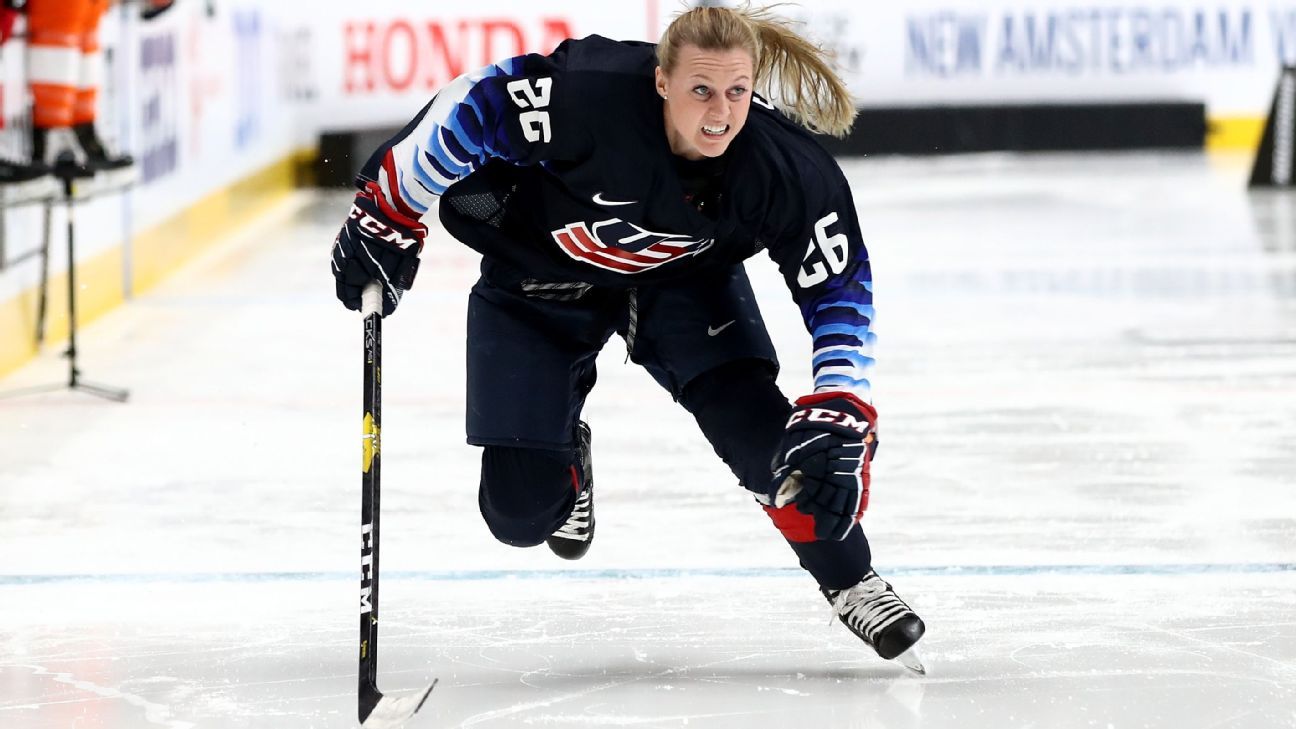 Coyne Schofield told ESPN it would be “a dream come true” to become an NHL GM one day, while Bowman said DeBartolo and Hunter both have aspirations of climbing the ranks in an NHL front office.

“It’s long overdue in my mind,” Bowman said. “It’s something that’s important to me. These three women are good hockey minds and it’s important to give them chances to take on bigger roles over the coming years.”

Asked why women traditionally have not been represented in hockey operations departments, Bowman said: “I don’t think there was ever a conscious movement to deny women, at least that wasn’t my experience. But I also don’t think there wasn’t as much emphasis on seeking out how they can help. I think too much of the same is not really helpful. There’s plenty of great former players and men who could contribute, but these women bring something different to the table — different perspective, different experience — and that’s why I think it’s long overdue.”

Coyne Schofield, who is still an active player, has a dual role with the Blackhawks. She will also serve as a youth hockey growth specialist, continuing to lead her all-girls youth program “the Golden Coynes.”

Coyne Schofield, who first interned with the Blackhawks communications department while studying at Northeastern University, has dabbled with several different career paths in hockey, including doing color commentary for San Jose Sharks games last season. Coyne Schofield will give up the Sharks gig this season due to her commitment with the Blackhawks, but will continue to work Notre Dame games for NBC this season. She has yet to talk with NBC about her role on national NHL broadcasts going forward.

As a player development coach, Coyne Schofield will develop relationships with Chicago’s prospects, who are scattered all over the world. According to Assistant GM Mark Eaton, Coyne Schofield’s responsibilities will include providing scouting reports, breaking down film, conducting virtual video sessions with the prospects, and being on the ice in Rockford, Illinois for practices with the Blackhawks’ AHL affiliate.

“Knowing there are going to be people watching me on the ice, and seeing a woman in a coaching role, just shows what’s possible for the next generation,” Coyne Schofield said. “That’s what excites me.”

Eaton said the fact Coyne Schofield is still going through the rigors of competing at an elite level will allow her to relate to prospects, while also giving the department a “ground level perspective” when it comes to their evaluation. As far as how players will respond to having a woman coaching them, Eaton said: “I don’t see it being an issue at all. Hockey is hockey. These guys, at this level, are so focused on getting to the NHL and want coaching and advice that will help them get there. They don’t care where it’s coming from.”

The Blackhawks have openly admitted to a rebuild, committing to playing younger players over the next few seasons — which Coyne Schofield sees as an exciting time to start with the franchise, especially in a player development role.

“I started as a youth hockey player here [in Illinois] wanting to be Chris Chelios, wearing No. 7 in every sport uniform that I had,” Coyne Schofield said. “I wanted to play for the Blackhawks growing up. Then I realized that might not be the route I could go, but I wondered, how could I be part of this organization in a different way?”

Hunter, a former college player and coach, joined the Blackhawks in 2016 after a stint with Hockey Canada. “About a year ago, she came to me and said, ‘I’d like the chance to do more than what I’m doing, if you are open to it,'” Bowman recalled.

When the NHL season shut down due to the pandemic in March, Bowman saw it as perfect timing to give Hunter more video and scouting assignments. “She started distributing at our meetings, and had really good insight,” Bowman said. “You have to have a certain skillset to be able to watch a player and break down their game with good understanding, and she demonstrated that right away. So it was only natural to expand her role and give her an opportunity to shine in that area.”

DeBartolo’s role includes what Bowman calls “black box analytics.” “She watches our games, breaks down things, she’s in meetings with our coaching staff,” Bowman said. “She jumped right in, and was very comfortable contributing and fit in great. She’s very determined to expand her role, too.”

Before taking the job with the Blackhawks, Coyne Schofield said she consulted with her mentor, Cammi Granato — who was hired by the Seattle Kraken last season as the NHL’s first female pro scout.

Granato’s biggest piece of advice: “Be confident. You know the game.”