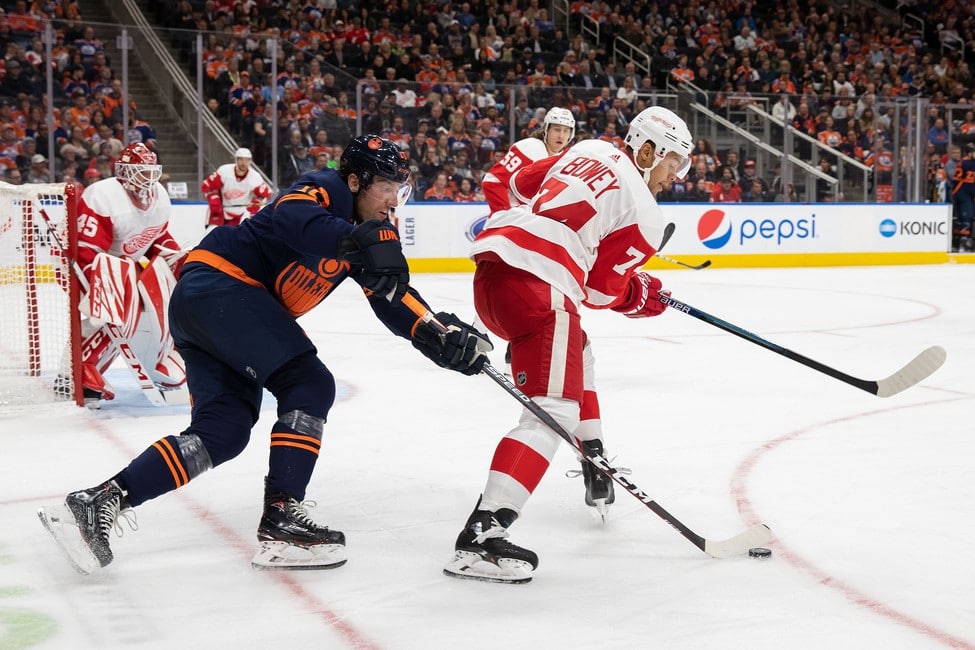 Alternate jerseys have been commonplace in the NHL since the 1990s. The Edmonton Oilers introduced their first alternate jersey in 2001-02, and have featured one for the majority of the last two decades.

More recently, NHL clubs have begun expanding their jersey sets for outdoor games, throwback nights and anniversary seasons. Per Icethetics, the Oilers are expected to unveil a fourth jersey in 2020-21.

Multiple Icethetics sources have now provided jersey descriptions that suggest the “twist” could be as simple as a color inversion (i.e.: a blue Canadiens sweater with a red chest stripe). An Icethetics source with a solid track record has reported the Oilers will have a white fourth jersey, similar to their current uniforms but with the blue and orange inverted. The source reports the look is “reminiscent of the original white jerseys from when the Oilers were in the WHA.”

Here’s a look back at each of the Oilers alternate jerseys.

“I wanted to design something that even if you knew nothing about sports or hockey, you could look at it and say ‘that’s pretty rad’. And you would still put it on and walk down the street wearing it,” McFarlane told 101.7 World FM’s Tony Sorgiovanni at the 2017 Calgary Comic Expo.

While the Oilers transitioned away from their classic orange and royal blue uniforms in 1996-97, this was the first major change to their iconic logo. The new crest included a raining oil drop, three sharp skate blades and five rivets to symbolize their five Stanley Cup championships. Midnight blue remained the primary colour, but the copper and red trim was replaced with silver.

It somewhat resembled the Wayne Gretzky-era Los Angeles Kings road uniform, which could have been rejected by Oilers fans still angry about “The Trade” on Aug. 9, 1988. However, the McFarlane jersey was extremely popular during the 2000s, and still brings up plenty of nostalgia. It was retired following the 2006-07 season when Reebok took over as the league’s official jersey manufacturer.

The Oilers classic orange and royal blue jersey is arguably the most popular uniform in franchise history. Edmonton donned these threads on the road from their inception into the NHL in 1979-80 through 1995-96. Perhaps the most famous image of the jersey was on May 24, 1990, when Oilers legend Mark Messier hoisted the Stanley Cup above his head in the Boston Garden.

In 2008-09, the Oilers brought back the jersey for the first time since the 2003 Heritage Classic to commemorate their 30th anniversary in the NHL. But after just one season as the alternate, the Oilers elevated it to their primary home jersey in 2009-10. Unfortunately, the same jersey that was worn throughout their dynasty in the 1980s, was also around for the worst era in franchise history during the 2010s.

“It’s terrific that the original uniform is being brought back and celebrated,” said then-President of Hockey Operations Kevin Lowe on Oct. 7, 2008. “All of the things we take so much pride in today were accomplished in that uniform, and I think fans deserve to see their team and especially their favorite players on this year’s team in those colours.”

It was shelved again in 2017-18 when the Oilers updated their home and away jerseys, but was revived as the third jersey once more in 2018-19. Many Oilers fans want it to return permanently.

After just one season as the team’s home jersey in 2007-08, the widely detested navy blue Reebok Edge jersey was downgraded to alternate status. The pajamas-style jersey is easily the second-worst in franchise history, just slightly ahead of the Reebok Edge white road jersey.

There’s no defending this jersey. It completely lacks any traces of tradition or creativity, and looks like it was designed in an NHL video game. The Oilers wisely dropped the jersey after the 2011-12 season, and went without at alternate uniform for the next three seasons.

When the Oilers selected Connor McDavid first-overall in 2015, he was presented with their new orange alternate jersey on the draft stage. A little more than three months later, the jersey made its on-ice debut during the Oilers’ home opener at Rexall Place.

For the first time since joining the NHL in 1979-80, the Oilers donned a jersey that paid homage to their WHA history.

“This new orange jersey is an exciting addition to the roster of jerseys worn by the Edmonton Oilers over the last 40 years. It is both contemporary and fresh, while also paying homage to the great history of the organization,” said CEO and Vice Chair Bob Nicholson on Jun. 26, 2015. “The wave of orange is going to look great during our Farewell Season at Rexall Place, and beyond.”

Prior to 2017 playoffs, the Oilers officially moved into the “Orange Crush Era” when they announced that their orange alternate jersey would become their new home jersey. Fans in Oil Country quickly got on board with the movement, as the crowd at Rogers Place was covered in orange during the Oilers’ playoff run.

When images of the Oilers’ latest alternate jersey were leaked last summer, they received mostly mixed to negative views on social media. However, the pictures didn’t do the jersey justice, and it quickly became a hit with fans in Oil Country.

Removing all the white from the jersey still might be a hard sell with traditionalists, but the sleek new design and two-tone orange-on-navy blue colour scheme looks great on the ice. The ADIZERO jersey also resembles Team North America’s home jersey from the 2016 World Cup of Hockey.

The Oilers wore their new alternate jersey exclusively on Friday night home games this season (10 scheduled games before the season was paused). If they do introduce a fourth jersey in 2020-21, the Oilers will surely reduce the number of times they wear the ADIZERO jersey, allowing their home orange uniform to be featured in at least 25 of 41 games.

Wild Weekly: A Pair Of Comeback Wins Against The Kings
Blackhawks Need Taxi Squad to Drive Better Results in Net
Canucks’ Players Who Benefit From Miller’s Absence
Coyotes a Potential Sleeper Threat for Avalanche in West Division
NWHL looks to etch its own history on hallowed Lake Placid ice in condensed season