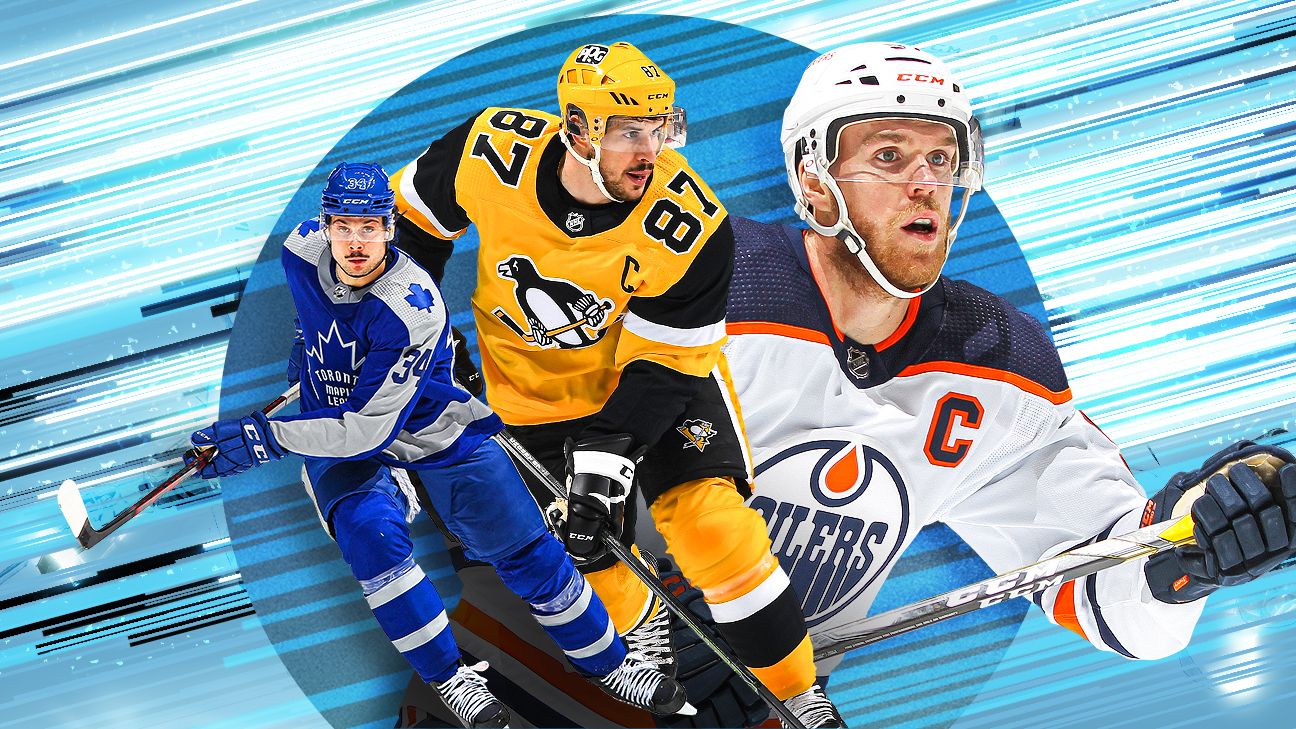 There are the 2021 ESPN positional rankings for wingers, defensemen and goalies — and then there’s the one everyone’s been anticipating since the series started, the top 10 centers in the NHL.

“I could have given you a top 20 and they would have all been outstanding players,” said one NHL coach, as he enthusiastically shared his ranking. “The centers — by far — had the best players on any of these lists.”

As a reminder on how these rankings were produced, we canvassed 10 active NHL players — seven skaters, three goaltenders — and 10 individuals in team hockey operations, from coaches to general managers to player personnel executives. The surveys were conducted over the past two months. Respondents were asked to rank their top 10 players at center, winger, defenseman and goaltender, based on a predetermined list of the top 20-30 players at each position. Players who were ranked in the top 10 on each ballot were given a numerical score — No. 1 earned 10 points, No. 2 earned 9 points and so on.

Following our lists of the top 10 wingers, top 10 defensemen and top 10 goalies, here are the positional rankings for centers for the 2020-21 season, according to those in the NHL we surveyed. Much as our coach discovered, taking what could be a top 20 and narrowing it to a top 10 means some very worthy candidates end up in the honorable mentions.

Stats are collected from sites such as Natural Stat Trick, Hockey Reference and Evolving Hockey.

McDavid, 24, was the clear No. 1 among our respondents, matching Tampa Bay Lightning goalie Andrei Vasilevskiy for the most first-place votes (16) in our positional rankings. Since 2017-18, no player in the NHL has more points (385) or a higher points-per-game average (1.47) than McDavid. He leads the NHL in even-strength (259) and power-play points (120) in that 262-game span.

McDavid leads all players with 64 points through 38 games this season.

The knock on McDavid has been that he’s a one-dimensional player. “McDavid is obviously a fabulous player. But he hasn’t filled in all of his holes yet,” said one NHL coach.

While he’s not a Selke Trophy finalist yet, McDavid has shown a discernible improvement defensively this season in expected goals against at 5-on-5 (2.22 per 60 minutes). He’s also on track to get over 50% in faceoff wins for the first time in his career.

He has two scoring titles, two player of the year awards from the NHLPA and one Hart Trophy. He’s Connor McDavid, and he’s the best center in the world.

Since 2017-18, MacKinnon is second among centers with a 1.29 points-per-game average. In 2021, the two-time Hart Trophy finalist has 43 points through 33 games during a season interrupted by injury.

The gap between the 25-year-old Avalanche star and McDavid was considerable, but MacKinnon was a solid second choice in our ranking. He was ranked first overall by one NHL coach and a veteran NHL defenseman. He was ranked second overall on eight ballots; in total, MacKinnon made the top five on 17 of 20 ballots.

But while McDavid made the top 10 on every survey, one NHL player personnel official and a veteran defenseman left MacKinnon completely off of their top 10s.

One of the most gifted goal-scoring centers the NHL has seen in the past 30 years, Matthews has a goals-per-game average of 0.58 for his career. From 2005 through this season, only Alex Ovechkin — you know, the guy chasing Wayne Gretzky’s all-time record — has a higher one (0.61). When it comes to goals per 60 minutes of 5-on-5 play, Matthews is first by a wide margin (1.52) over Ovechkin (1.21).

Matthews was ranked third on half of the surveys submitted. He didn’t receive a first-place ranking, but was second on three ballots.

A panel of NHL players, coaches, GMs and other front-office personnel ranked the best players at each position:

One veteran NHL defenseman ranked Matthews outside the top 10, the only respondent to do so. “He’s a heck of an offensive player. If you’re building a team around a center, of course you need goals. But you have to have that defensive side too,” the defenseman said. “In the D zone, that’s a big thing. He’ll get there eventually.”

One NHL coach who had him ranked sixth overall agreed with that assessment. “If you’re looking purely at the offensive side of the game, he’s a star,” he said, “but there’s a part of Matthews’ game that’s not there yet.”

Or as another NHL coach put it: “Two-way centers are how you win. Not all these guys are there yet. I don’t think McDavid is quite there yet and I don’t think Matthews is right there yet. But they produce so much, you have to put them up there.”

And the crowd chanted, “You still got it (clap, clap, clap clap clap)!” Or at least the respondents to this survey did.

Crosby, 33, has 43 points through 37 games this season, which is in line with his point production in 2019-20. His days of challenging for the league scoring title could be in the rearview mirror, but he remains one of the NHL’s most dynamic and complete players, building on a career that rates among the greatest in hockey history.

Crosby didn’t receive a first-place ranking but was second on two surveys, third on two others and fourth on eight more.

“It was really hard for me not to put Crosby first, to be honest with you. Has he just slipped enough where other guys get the nod? That was the question for me,” said one NHL coach who had him fourth.

However, one NHL general manager and another player personnel executive left Crosby completely out of their top 10s.

Nevertheless, Sid The Kid had enough support to place fourth overall, above some of the better young centers in the NHL today.

The reigning Hart Trophy winner and NHLPA player of the year is third to McDavid and MacKinnon in points-per-game average among centers since 2017-18 (1.27). The 25-year-old is having another extraordinary season offensively, with 56 points in 38 games. His goals-per-game average is down a shade from two straight seasons of 0.61, but there aren’t too many centers in the NHL who could dream of hitting 0.61 goals per game to begin with.

The knock on Draisaitl remains that he doesn’t defend well, which was an incantation used by critics against his MVP candidacy last season.

One NHL coach wasn’t buying it. “I think he’s easily as good defensively as McDavid,” he said, ranking Draisaitl third on his ballot.

Since he was drafted second overall behind McDavid in 2015, Eichel has 355 points in 375 career games, including 18 points in 21 games this season before he was injured. All of this has come while playing for a series of awful Buffalo Sabres teams. Consider that Kirby Dach has played more Stanley Cup playoffs games than Eichel, and he was drafted by the Chicago Blackhawks in 2019.

His teams stink. Eichel does not. In fact, one veteran NHL defenseman ranked him first overall on his ballot.

Catch NHL games streaming live every night (and on replay) this season on ESPN+. Click here for the upcoming schedule and to learn how to subscribe.

“Jack Eichel is the best center in the NHL. I put him over Connor. The biggest thing for me is that he hasn’t had anyone to play with for most of his career,” he said.

The coach said that Eichel isn’t as “hard to play against” as some other top centers, using Anze Kopitar as a counterpoint. “Is Kopitar a harder guy to play against than Jack Eichel? Yes, he is,” he said. “But that doesn’t make Jack Eichel a poor player.”

Bergeron, 35, has been the heart of the Bruins’ “Perfection Line” for the past few seasons, skating with Brad Marchand and David Pastrnak, and dominating on both ends of the ice. But it’s Bergeron’s defense that earns him this ranking. One of the best faceoff men in the history of the NHL, Bergeron is a four-time Selke Trophy winner and is working on nine straight seasons as a finalist for the award.

He’s the defensive standard by which others are judged.

Barkov is eighth in points-per-game average among centers over the past three seasons (1.09), ranking higher than players like Eichel and Bergeron. That includes 40 points through 33 games this season for the surprising Panthers. His defensive prowess has him in the Selke conversation annually, although he’s been unable to break through to become a finalist.

“He can produce offense and absolutely dominate the game on defense. That’s such a huge asset to have,” one NHL coach said.

Making this list should help shake the “underrated” label from the Panthers center — in fact, one general manager had him ranked first on his ballot, over McDavid and Matthews. But then again, seven respondents had him outside their top 10s altogether.

“He’s close. Very close to the top 10,” said one NHL coach who left him off his list. “But I’m a huge fan of Barkov. He does everything right.”

Point is an offensive dynamo and a defensive stopper. Since 2017-18, the Lightning center has the 14th-best points-per-game average among centers in the regular season (0.96), but has the second-best rate in the playoffs (1.14) for centers who played at least 30 postseason games in that span. Victor Hedman took home the Conn Smythe for the Lightning’s bubble Stanley Cup win; with 33 points in 38 games, Point had a case for it, too.

“He absolutely has to be on this list after the playoffs he had,” said an NHL skater.

One fellow forward had Point second on his ballot, but that was the highest ranking he received. Point was left off of nine ballots.

There were 30 centers in the pool. Twenty of them are still splashing around while Barzal managed to take the final spot in the top 10.

Like other young centers on this list, Barzal gets dinged by some for his defense and faceoffs — he’s a career 42.3% in the dot. But one NHL veteran skater offered up a counterargument:

“Barzal is a negative in the faceoff circle. That’s absolutely true. But make no mistake: He gives a s— about defense.”

As you can see, some very, very good centers are on the outside looking in with respect to this list. A few notes on the notables: