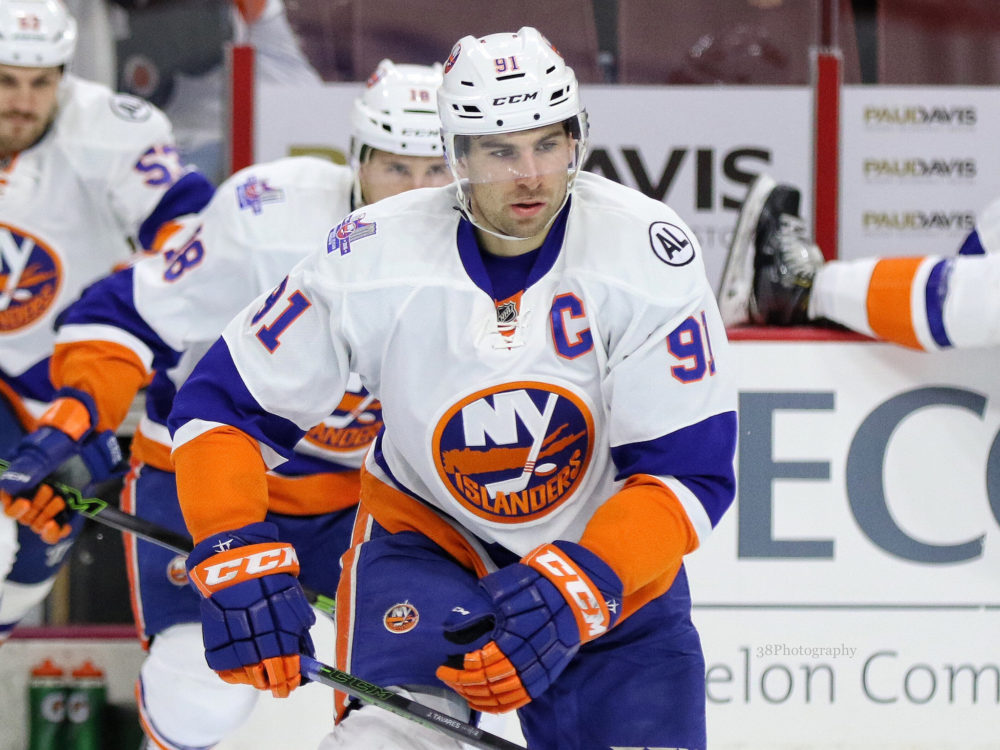 The New York Islanders finished the 2008-09 season with the league’s worst record. The prize for their futility, selecting first overall in the 2009 NHL Draft. There were a few options for general manager Garth Snow to choose from, center Matt Duchene, defenseman Victor Hedman, and center John Tavares.

Snow did not show his hand until he walked up to the podium and made his selection. It’s been 11 years since that draft. Let’s break it down.

The Islanders had the first overall pick for the first time since 2000 when they selected goaltender Rick DiPietro. Snow was in the third season of his rebuild and had to nail this pick. Tavares scored in his very first game in the NHL.

Tavares was everything that New York imagined he would be. (from ‘Islanders captain John Tavares is the best player New York sports has to offer,’ New York Daily News, 04/26/2016) He is a five-time 30-plus goal scorer, including a 47-goal season in 2018-19 with the Toronto Maple Leafs. The former captain of the Islanders carried the team on his back in the 2015-16 season and helped them advance to the second round of the playoffs for the first time since 1993. While wearing the orange and blue, he was named an all-star five times and received multiple Hart, Selke, and Lady Byng Trophy nominations.

“They obviously believed in me to try to turn things around. I take a lot of pride in being a part of that and I want to prove that and get back to where the Islanders once were.”

Snow made the right choice selecting Tavares, though he failed in getting front-line players to play alongside him. However, July 1, 2018, is a day Islander fans will never forget. It was a looming decision that ultimately took Islanders fans everywhere by surprise.

Tavares opted to move on from the Islanders and signed with the Maple Leafs. On Feb. 28, 2019, he returned to Nassau Coliseum and was not greeted with open arms. “‘I don’t really expect it to be a very welcoming return,’” Tavares told reporters Thursday before the Maple Leafs lost 6-1 to the Islanders at Nassau Coliseum.” (from ‘Maple Leafs’ John Tavares gets hostile reaction in return to Long Island,’ USA Today, 2/28/2019).

Related: Brian Leetch: The Road to the 1994 Conn Smythe Trophy

Islanders fans were ruthless, throwing snakes on the ice, holding up signs of betrayal, and chants rained from the stands exclaiming “we don’t need you,” and the chants were loud, and proceeded to get louder all night. The Islanders moved on to beat the Maple Leafs 6-1 that night.

Tavares can now be seen wearing the ‘C’ for Toronto, and although things didn’t end exactly the way fans of Long Island would have liked, he still proves to be the correct choice for first overall in the 2009 NHL Draft.

Snow traded defenseman Chris Campoli and forward Mike Comrie to the Ottawa Senators for a first-round pick at the 2009 Trade Deadline. The Senators’ pick was from the San Jose Sharks. San Jose made the playoffs and the Isles selected 26th overall. Snow moved from 26 to 16 by trading the following: overall picks 26, 37, 62 and 92. The Isles brought back pick 77 in the deal.

Snow was not finished. They moved up to the 12th pick by trading the 16th pick and their newly acquired 77th pick to the Minnesota Wild. (Minnesota selected Nick Leddy). The Islanders selected Calvin de Haan. He would have likely been available at 16. The defenseman had to deal with a rash of injuries following his selection, including missing the entire 2012-13 season. Snow’s 2009 trade fest to get de Haan was looking like a bust. However, de Haan bounced back and played 51 games in 2013-14 and his games played increased through 2016-17 when he played in all 82 games.

Points-wise, his best season came in 2016-17, when de Haan accrued 25 points. However, he wasn’t drafted for his ability to find his way onto the score sheet. He was a dependable defenseman in his own end, and not many pucks wound up in the back of the net when he was on the ice.

In the same summer that the Islanders lost Tavares, they let de Haan walk and he signed with the Carolina Hurricanes. It was the right move for new GM Lou Lamoriello. He has always had a history of injuries and was commanding more than his worth for a player who has only recorded one full NHL season. The Hurricanes traded de Haan to the Chicago Blackhawks in June 2019.

Ironically, Snow could have taken Leddy with this pick.

Day two of the draft opened with Snow needing to replenish the organization’s goaltending pool. He had to replenish a lot in the organization. Snow drafted the Finnish goalie over players like Ryan O’Reilly and Jakob Silfverberg. It was a leap for Snow. Koskinen was not the highest-rated goalie available. He played four games with the Isles in 2010-11, posting a 2-1 record with an .873 save percentage (SV%). He returned to Europe during the 2012-13 lockout, before finally returning to the NHL, signing with the Edmonton Oilers.

In May 2018, Koskinen signed a one-year contract with the Oilers and earned 25 wins manning the posts, and was then rewarded with a three-year extension in Edmonton, where he’ll be through 2022. Since his 25-win season, things have not gone as smooth for Koskinen and the Oilers.

Snow reacquiring this pick as the beginning for the third round played out just like the beginning of the second. He selected another goalie, passing over players like Tyson Barrie and Reilly Smith. Nilsson played 23 games over two seasons for the Islanders, going 9-9-2, with an .898 SV% and a 3.05 goals-against average. Snow acquired Jaroslav Halak and Chad Johnson in the summer of 2014 and Nilsson knew that he had little chance to make the Islanders. He opted not to return to the Bridgeport Sound Tigers of the AHL but instead signed in Europe. Snow later traded his rights to the Blackhawks as part of the Leddy trade.

Nilsson has bounced around since the trade, playing with the Oilers, St. Louis Blues, Buffalo Sabres, Vancouver Canucks, Ottawa Senators, and now the Tampa Bay Lightning. Although the Swedish netminder showed flashes of brilliance, he’s spent most of his career as a backup goaltender. His best season came in 2016-17, where he received 23 startsand sported a 10-10-4 record. He appeared as if he was on the brink of breaking out, earning a .923 SV% and 2.67 GAA.

Currently, Nilsson is serving his time on the Lightning’s injured reserve, after Ottawa traded him and Marion Gaborik for forward Cedric Paquette, defenceman Braydon Coburn and a 2022 second-round pick. Both players went right to Tampa Bay’s injured reserve for cap relief.

Snow reacquired the pick and selected the Toronto native. Cizikas made headlines a couple of years before being drafted when he was charged with manslaughter during a rugby match. He played two more seasons in the OHL before making his professional debut in Bridgeport. He joined the Isles for 15 games in the 2011-12 season, and a season later certified himself as the heartbeat of the fourth line on the Islanders.

Joined by Matt Martin and Cal Clutterbuck, Cizikas can still be found on the fourth line bringing energy to every shift. The trio was deemed the “best fourth line in hockey” by analysts throughout the NHL and is still very much an important part of the Islanders’ success moving forward. (from ‘The backhanded compliment that is Isles’ best 4th line in NHL’ New York Post, 05/05/2016)

Cizikas had his best season during the 2018-19 season, lighting the lamp 20 times, chipping in 33 points. Not too shabby for a “fourth-liner.” Although the Ontario native has been plagued by injuries in 2019-20, including a laceration that has held him out for about a month and counting, it’s evident the Isles suffer when he is out of the lineup.

Upon his return when the NHL resumed play during the COVID pandemic, the Isles made it to the Bubble for the 2019-20 playoffs, and Cizikas helped lead the Islanders to the Eastern Conference Final for the first time since the 1992-93 season.

There certainly was a lot of drama between the Islanders and the Russian defenseman. Klementyev was the second player of the 2009 class to make his NHL debut, albeit just for one game. Klementyev became a pawn in Snow’s ploy to bring 2008 third-round pick, Kirill Petrov, to America. It did not work.

Klementyev played three seasons in Bridgeport. When the team tried to send him to the ECHL for conditioning, the Russian refused. The Isles suspended him, waived him, and he returned to Russia. The defenseman bounced around the VHL, Poland, and Belarus leagues, last skating with HK Gomel in the 2016-17 season.

The Islanders got a steal in the sixth round with the University of Notre Dame standout. The Minnesota native fell this late in the draft for a couple of reasons: Lee was undecided whether he would attend the University of Minnesota to play hockey and football, and he was playing in the USHL after being drafted. After his junior year, Lee signed with the Islanders. He scored his first NHL goal on his first shot.

A numbers game had him start the 2014-15 season in Bridgeport. After a few weeks, he made his season debut with the Islanders and scored 25 goals. He had a weak 2015-16 season but bounced back with a strong 34-goal, 52-point performance the following season.

Lee wasn’t satisfied with his first 30-goal season, and he potted 40 goals in the 2017-18 season, putting his name in the conversation for one of the league’s most reliable goal scorers.

Following his stellar 40-goal performance, Lee was honored with being named the 15th captain in Islanders history following Tavares’ departure from the organization. (from ‘Anders Lee selected as Islanders captain, Newsday, 10/05/2018) When Lamoriello and head coach Barry Trotz took the reins of the organization, they asked around as to who makes for the best leader on the Islanders team.

It was clear to me, clear as day, that Anders would be the 15th captain of the Islanders. We broke the news today during our morning meeting. I think he has a respectful thought process about the whole thing. He should be very proud of the respect that his teammates give him and the honor to be named a captain.

Snow doesn’t get too much credit for the success he had in the 2009 NHL Draft for the Islanders. Six out of seven hits, despite where they might be now, proves it was a good draft by the former general manager. It’s not often a team drafts two of their captains within the same draft, and the Islanders did just that in Montreal that year.