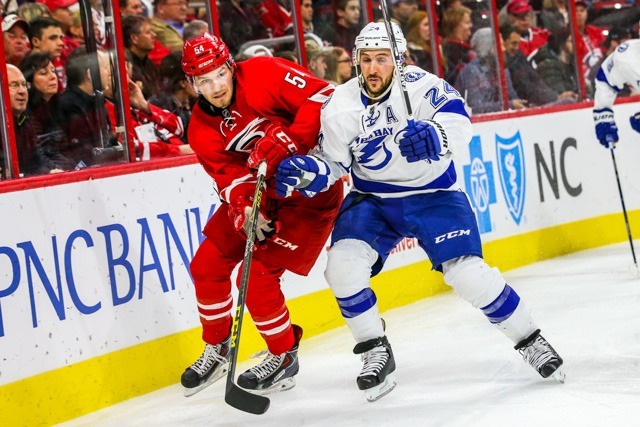 The NHL hosted a pair of largely successful outdoor games this past weekend on the shores of Lake Tahoe. The Colorado Avalanche edged the Vegas Golden Knights 3-2 in a game that started on Saturday afternoon and bled into early Sunday morning due to adverse ice conditions. Later that day, the Boston Bruins obliterated an undermanned Philadelphia Flyers team 7-3 as David Pastrnak scored a hat trick to pace the B’s to an easy victory. Even with the seven-hour delay in between the first and second period of the first game, given the current circumstances, both games were pretty entertaining for the most part.

With the inclusion of the Knights in the outdoor festivities, this means that only five teams still haven’t played in an NHL outdoor game, whether it be the Winter Classic, Heritage Classic or a Stadium Series contest. Those teams are the Arizona Coyotes, Carolina Hurricanes, Columbus Blue Jackets, Florida Panthers and Tampa Bay Lightning. Now, of those teams mentioned, the Hurricanes don’t really count, they were tabbed to host a Stadium Series tilt this season but had it postponed until next season.

So ostensibly that leaves just the four others that do not currently have a fixed date to play outdoors, with one of those teams being the defending Stanley Cup champs. Whispers about the Lightning hosting one of the two main US events have steadily gotten louder since January of 2018 when the Bolts last hosted the NHL All-Star Game.

Lightning Have Wanted An Outdoor Game For Years

The desire of the club to host an outdoor game has been around for a long time, but the first official bid came back in August of 2016. Since then, the team has gotten great support from Rob Higgins of the Tampa Bay Sports Commission, who has also helped shepherd the Super Bowl, the college football championship game as well as other big-time sporting events to the Tampa Bay area. It’s all been for naught thus far, as each year’s announcement doesn’t include the Lightning.

Just before the NHL announced the 2020 and 2021 outdoor sites in the summer of 2018, talk was rife about the Lightning possibly hosting the Winter Classic at Raymond James Stadium. NHL executive vice president Steve Mayer said that Tampa was “absolutely” on the shortlist of places the league was considering. Nonetheless, that talk died quickly after the 2020 site was awarded to the Dallas Stars and the 2021 game was given to the Minnesota Wild. The Bolts were left out of the announced Stadium Series dates as well.

The omissions were interesting given how well the team hosted the All-Star game. Some may ask about the Heritage Classic, but alas, that’s usually reserved for Canadian teams only. There’s also the Centennial Classic but the name says it all about anyone playing in it in the near future.

To this point, many non-traditional hockey markets have already seen their beloved teams play in some type of outdoor matchup outside the state of Florida. Having said that, it seems odd that the team that’s been the most successful lately, has yet to take the outdoor ice.

2022 Winter Classic Will Probably Be in Minnesota

The next Winter Classic is presumably back to its usual date of Jan. 1, 2022. Neither the site nor the teams have been announced yet, but it’s almost certain to be a replayed version of the original game that was supposed to happen this season. The site was Minneapolis’s Target Field, home of MLB’s Minnesota Twins, and was to feature the Wild and the St. Louis Blues. So again, no Bolts. This brings us back to the Stadium Series game that will be hosted by the Hurricanes.

With no opponent as of yet, and no real rival team to speak of, the Lightning would be an excellent choice to face off against Carolina in a battle of NHL natural disaster-clad clubs. The two are divisional rivals this season due to the COVID-19 protocols, and face off in at least eight contests. Plus, this season, the first two rounds of the NHL playoffs are interdivisional like back in the olden days. The two could meet in a knockdown, drag-out series to determine who plays in the Conference Final.

What breeds animosity for a team more than facing them in a bunch of games in a really short amount of time? So far, the games involving Tampa and Carolina have been tense affairs between two well-balanced teams. These two squads both have a legit shot at winning the division and making a deep playoff run. Both teams play an exciting, up-tempo brand of hockey with the Canes shading a bit more towards the physical side of things and the Bolts focusing more on skill. They say that type of contrast in styles makes for great professional fights, but the same holds true for hockey games as well.

There’s been some talk about the Hurricanes possibly playing the Bruins with Carolina donning the throwback duds of the Hartford Whalers. This season’s Carolina reverse-retro jersey is exactly that, only with gray being the dominant color but the rest is exactly the same. On some level, the Bruins wearing a 1980s throwback jersey going against the “Whalers” just like they did in the old Adams Division would be kind of cool. On the other hand, that would be the B’s fifth outdoor game and leave the Bolts out in the cold another year.

The fact that the NHL has 11 teams with three or more outdoor game appearances before Tampa has even gotten one is just wrong. Not to mention, say Carolina and Tampa do meet in the playoffs and the Hurricanes end up going on to win it all. The Stadium Series game would be a matchup of the last two winners of the Stanley Cup with the Bolts looking for revenge. That’s a game the whole hockey world can get behind, no matter which team you root for.