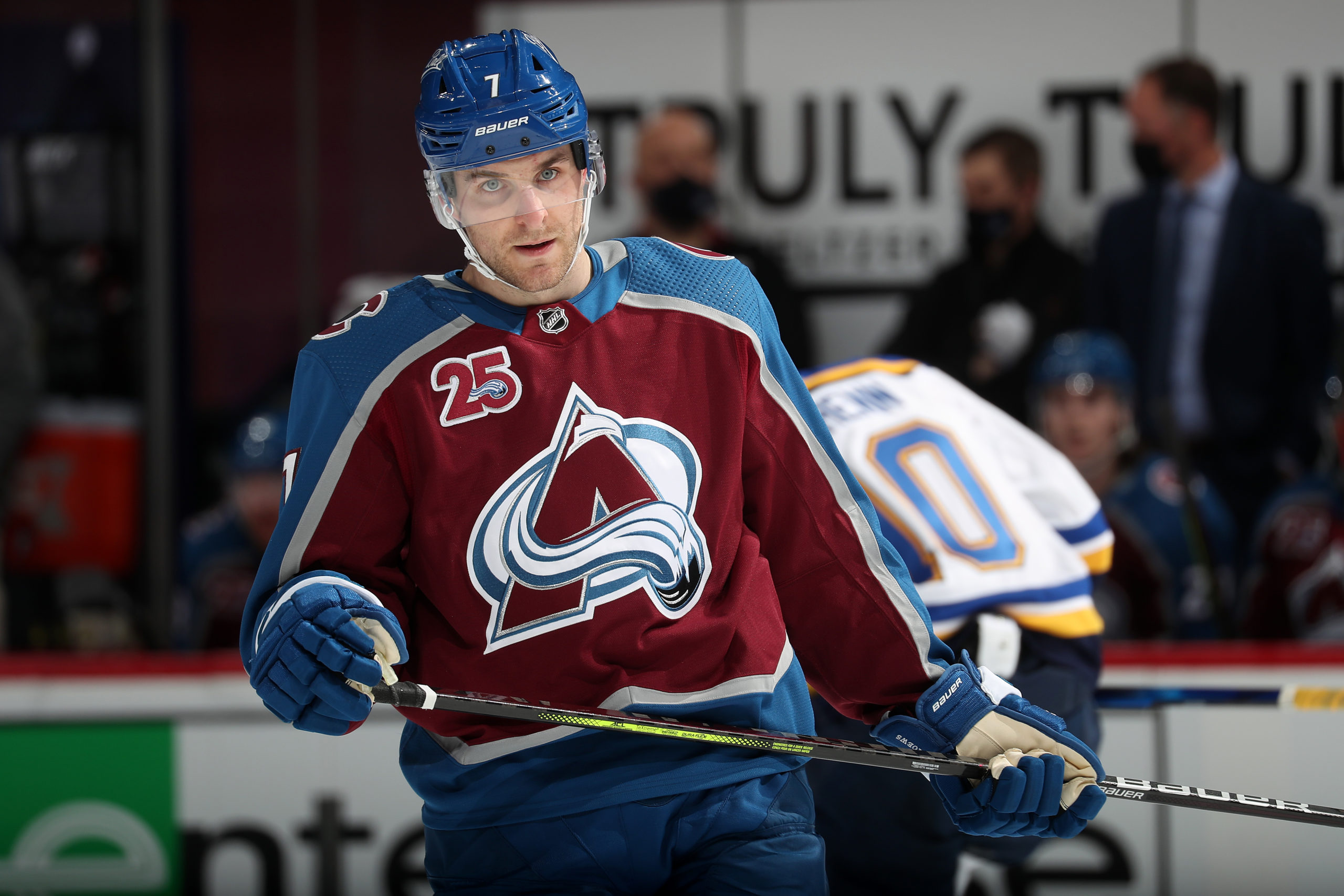 The Colorado Avalanche are glad to get the band back together.

Three players that had recently missed time due to injuries scored goals as the Avalanche dumped the Vegas Golden Knights 3-2 on Saturday just off of Lake Tahoe in Stateline, Nev. The game was held up by a delay of roughly eight hours after the first period due to poor ice conditions.

Samuel Girard scored early in the first period to start the scoring. Nathan MacKinnon scored in the second to give Colorado a 2-1 lead, and Devon Toews scored what proved to be the game-winner with 6:49 to play.

Girard was playing in his first game back after missing the last two games due to COVID protocol. MacKinnon missed parts of two games in early February, and Toews’ goal was his first since he missed three games with a lower-body issue.

MacKinnon’s fourth of the season was a beauty, starting from his own slot and ending with a perfect rip. It was also his second goal in the last two games, which was welcome after he plowed through a seven-game goalless drought. Girard’s was his second of the season and first since Jan. 26.

Toews’ fourth goal of the season gave Colorado a two-goal lead in the third, but Vegas trimmed the margin to 3-2 on a goal by Alex Tuch, which was one of the better goals of the season.

Philipp Grubauer stopped 27 shots for his ninth win of the season, and the Avs shelled Vegas goalie Marc-Andre Fleury with 39 shots, including 17 in the first period. After shutting out Colorado on Valentine’s Day, the Avalanche have tagged him for three goals in each of the last two games. He hasn’t allowed more than one goal in back-to-back games at any other point this season.

The biggest loser, oddly enough, was the sun. The expectation was for an overcast day, but the sun didn’t cooperate. It created higher temperatures than expected, some nasty glare, and choppy conditions that caused the eight-hour delay.

The playing conditions deteriorated quickly as the first period wore on. There were a number of spills during the opening period, and players and officials stumbled and fell on the ice when heading off during the intermission.

The teams took an extended intermission between the first and second periods to give the crew some extra time to get the conditions before pushing the start of the second period to 9 p.m. local time. The duration between Girard’s opening goal in the first and Alec Martinez’s second-period equalizer was nine hours.

The choppy ice played to Colorado’s disadvantage, as was evident by the slowing down of their patented breakouts. But that didn’t stop them from putting the pressure on right away.

The sunlight did more than compromise the ice conditions. It caused some tricky glare for the goaltenders, especially early. Grubauer actually wore sunglasses under his helmet for part of the period.

Fleury had some early trouble spotting the puck in the first, as Girard’s opening goal went through some traffic and then through Fleury’s legs. A couple minutes later, the Vegas goaltender had some issues with a 75-foot dump-in, resulting in a big rebound. Grubauer didn’t appear to have as much of an issue with the glare, but both seemed accustomed to it deep into the first period.

Fleury got more practice with the glare, stopping 17 shots in the first period while helping the Golden Knights fight off three penalties.

Graves Coming Around for Colorado

The first quarter of the season was shaky for Ryan Graves. He’ll be the first one to tell you. He only has two points, both secondary assists, and they came a month apart. He was even a healthy scratch once earlier this saying, which is saying quite a bit with the injury woes Colorado’s faced.

But the three games against Vegas have been some of his best hockey of the season. Avalanche coach Jared Bednar said the 1-0 loss on Valentine’s Day was Graves’ “best game of the season,” and he notched his second assist two nights later. Graves didn’t land on the scoresheet on Saturday, but he logged maybe the most important 90 seconds of the game to preserve the Avalanche win.

With Colorado leading 2-1, Nazem Kadri and Cale Makar took penalties just 38 seconds apart, landing the Golden Knights into 1:22 of a 5-on-3 advantage. Grubauer had to make just one save during that stretch because Graves took care of it for him. He was out for the duration of Vegas’ two-man advantage, blocking three shots.

It’s not a surprise that special teams helped Graves get going. The third-year defenseman led Colorado in minutes on the penalty kill this season.

Colorado wraps up its four-game set with Vegas on Monday. The Avalanche have taken two of the first three, and all three have been one-goal games. The last two wins have pulled Colorado within two points of Vegas in the West Division standings, and the Avalanche are only three points behind the division-leading St. Louis Blues.