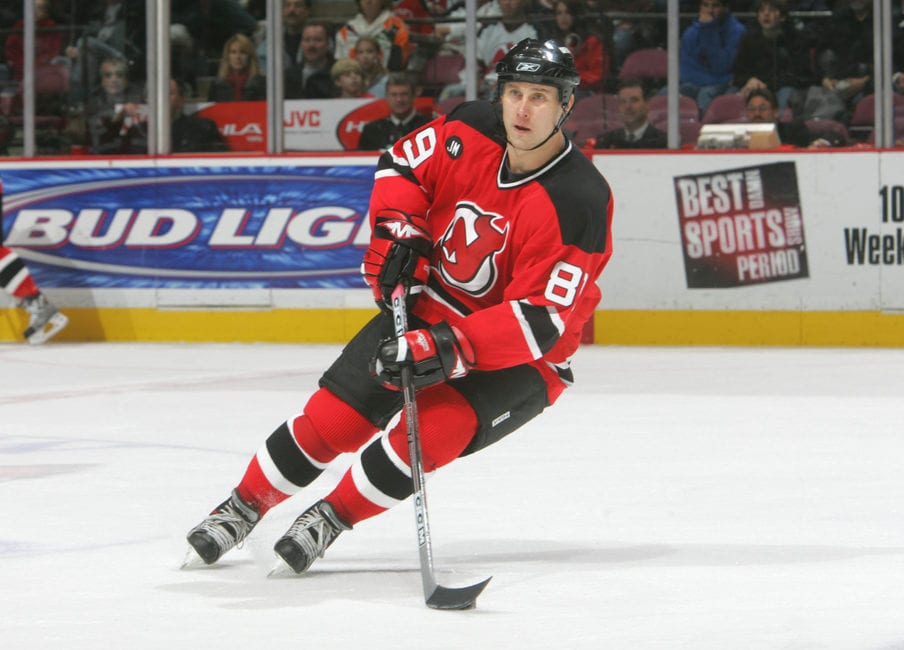 It might be hard to believe for some New Jersey Devils fans, but Saturday, March 14, 2020, marked the 20th anniversary of the team acquiring Alexander Mogilny via trade during the 1999-2000 season.

New Jersey traded youngsters Brendan Morrison and Denis Pederson to the Vancouver Canucks in exchange for the Russian sniper. It’s safe to say the transaction goes down as one of the most underrated in franchise history, so let’s revisit the Devils’ trade for Mogilny.

The Circumstances Prior to the Trade

There’s no doubt that New Jersey had a Stanley Cup contending roster in 1999-2000, but then-general manager Lou Lamoriello likely felt that the team needed a bona fide goalscorer. Prior to the blockbuster deal, the Devils hadn’t won more than three consecutive games since late January (Jan. 17-26) and executed four other trades.

New Jersey received a majority of its offensive firepower from one line, which entailed Patrik Elias, Jason Arnott and Petr Sykora. The trio combined for a total of 196 points by season’s end, which also left rookie forward Scott Gomez as the only other Devils skater that finished the campaign with 50 or more points (70).

Lamoriello arguably felt the need to go all in and acquire the necessary veteran and talented assets in exchange for youth to win a Stanley Cup that season. Before the 1999-2000 season, the Devils were eliminated from the first round of the Stanley Cup Playoffs in consecutive postseasons, while finishing the regular season as the Eastern Conference’s No. 1 seed. The team also slipped out of first place for the Atlantic Division during the second half of the 1999-2000 season and weren’t crowned division champions for the first time since 1995-96.

It seemed that the team was headed down the same underachieving path again if the Devils didn’t acquire a skater such as Mogilny to help with the playoff grind. In his 11 seasons played before joining the Devils, he totaled 350 career regular-season goals in 693 games.

The Compensation for Mogilny

Given Mogilny’s illustrious NHL career, it was surprising that Vancouver didn’t demand a draft pick from the Devils in addition to Morrison and Pederson. While Pederson was a former first-round draft pick (1993), the Prince Albert, Saskatchewan native’s NHL career ended after the 2002-03 season. He also only played parts of two seasons with the Canucks before he was traded to the then-Phoenix Coyotes in 2002-03. Let’s not forget that Pederson recorded 23 points in 102 games played with the Canucks.

Vancouver received notable value from Morrison’s tenure with the Canucks. The 1993 second-round selection skated with the team for parts of eight seasons and tallied 393 points in 543 games played. The University of Michigan product was a top center with Vancouver for more than a handful of seasons before he signed with the Anaheim Ducks for the 2008-09 campaign.

Morrison then bounced from team to team with the likes of the Dallas Stars, Washington Capitals, Calgary Flames and Chicago Blackhawks before retiring after 2011-12. The 5-foot-11 forward never won a Stanley Cup, though.

There’s no doubt that New Jersey received the better end of the trade with Vancouver. While the Russian superstar only recorded three goals and chipped in three helpers in 12 games played after being acquired, he was a key aspect on offense for the team winning its second Stanley Cup championship later that spring.

The 1988 fifth-round draft pick wasn’t close to a point-per-game player in the Stanley Cup Playoffs, but he still earned four goals and three assists in the Devils’ 23 games played that postseason. Let’s not forget that Mogilny earned a clutch game-winning goal in Game 6 during the third period of the Eastern Conference Final vs. the Philadelphia Flyers, which forced a dramatic Game 7.

Mogilny then earned the secondary assist in Game 7 on Patrik Elias’ game-winner during the latter stages of the third period in Philadelphia. The tally officially completed the Devils’ 3-1 series comeback and propelled the team to the Cup Final, after taking down the Flyers in a nail-biting 2-1 victory. The two-time 50-goal scorer then tallied one goal and one assist during the Cup Final, while offering a mature and disciplined veteran presence in all six games vs. the Dallas Stars.

The following season was the highlight of Mogilny’s brief tenure with New Jersey. The then-31-year-old recorded 83 points while finding the back of the net 43 times. At that time, his 43 goals in a season were good for third-most by a Devil in one campaign. Not bad for a skater in his 30s and only his first full season with the team, right? His 83 points also rank tenth most in team history to date (tied Ilya Kovalchuk & Aaron Broten).

Let’s not forget that his seven game-winning goals and 12 power play tallies (tied with Randy McKay) led the team that season.

Mogilny helped the Devils advance back to the Stanley Cup Final for consecutive seasons after he notched an impressive 16 points in 25 games played. He netted five goals while chipping in 11 assists, but unfortunately, New Jersey lost in seven games to the Colorado Avalanche.

Keep in mind that the 1999-2000 and 2000-01 Devils are the only squads in team history to repeat as Eastern Conference champions.

Considering both Mogilny and the Devils’ success in those first two seasons with the team, one would think he’d receive more attention and praise decades later.

This hockey enthusiast believes he’s a forgotten star in Devils’ history. It’s understandable at first glance since New Jersey entailed numerous fan-favorite and other star-caliber skaters from the late 1990s until the 2004-05 NHL lockout when the team won three Stanley Cup championships in the process.

Skaters such as Scott Stevens, Ken Daneyko, Patrik Elias, Scott Niedermayer, Bobby Holik, Randy McKay, Brian Rafalski, John Madden, Scott Gomez and the great Martin Brodeur all won multiple Cups with New Jersey and were teammates with Mogilny. All those players mentioned above other than Mogilny have also made appearances at recent reunions, been interviewed on MSG Network (the team’s local TV network) or guests at the Prudential Center over the years.

Mogilny was also absent at the most recent 2000 Cup team’s 20th reunion back in February. Younger fans might not even realize just how important he was. It’s rare for the team to spotlight him, and in this hockey enthusiast’s opinion, it seems that his name gets overshadowed by other former skaters often in conversations or over televised broadcasts.

Unfortunately, part of that might have to do with Mogilny’s second tenure with the Devils, which there’s arguably a whole generation of fans that can’t recall that additional stint.

After the 2004-05 lockout, the one-time Stanley Cup champion signed on for the 2005-06 campaign. It marked his final season in the NHL, but Mogilny only dressed in 35 games with the Devils and for the first time in his professional career he skated in the minors with the team’s AHL affiliate, the Albany River Rats. Mogilny quietly disappeared from the NHL after dressing in his final contest on Dec. 31, 2005, prior to dressing in 19 games with Albany.

It seems that the second stint with New Jersey might have placed a sour note on his relationship with the team and perhaps why he’s overlooked from time to time.

For example, take another superstar who briefly laced up the skates with New Jersey in Ilya Kovalchuk. Let’s face it – Kovalchuk played in 101 more regular-season games, fewer playoff contests and receives more attention, for all the wrong reasons, than Mogilny does. Those 101 more contests aren’t that much of a difference but for some reason fans provide more attention towards Kovalchuk.

Mogilny was a key member of two historic Devils’ teams while acting as a true and clutch professional donning a red and black sweater. Twenty years later, fans should remember and appreciate just how important the trade and Mogilny were in franchise history.