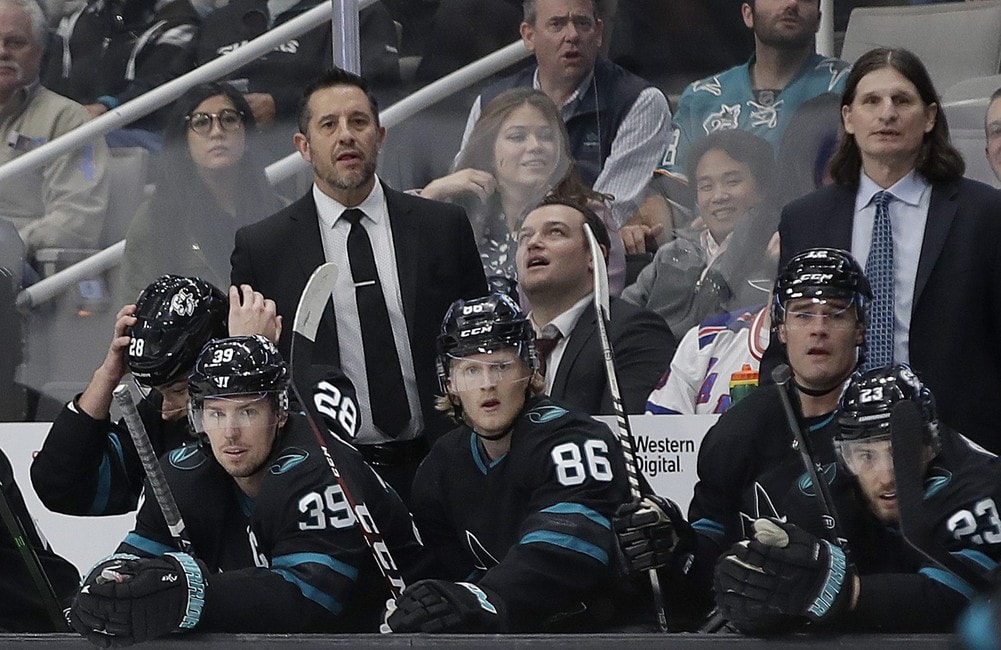 Disregarding interim head coaches, the San Jose Sharks have only had 7 head coaches in their soon-to-be 29th season of existence. Considering that they have still yet to win a Stanley Cup, there isn’t exactly a clear-cut answer to who the greatest coach in franchise history has been. I plan on answering this question by taking a look at every permanent head coach in the history of the Sharks.

Kingston was the head coach of the Norwegian national ice hockey team before he was hired as the first head coach in Sharks history prior to their inaugural season in 1991. Considering that the team’s roster was composed of castaways from other NHL franchises, with the exception of Doug Wilson, who was acquired by the Sharks from the Chicago Blackhawks in September, you probably wouldn’t have expected great results out of them. But it ended up being much, much worse.

In Kingston’s two seasons at the helm, they had a record of 28-129-7. They finished the 1992-93 season with 71 losses, the most in one season in NHL history. Kingston was removed as head coach following the 1992-93 season and never coached another game for an NHL team again.

The Sharks looked within their organization to find their next head coach, and they eventually hired Constantine, who was previously the head coach of their IHL affiliate, the Kansas City Blades. Constantine also coached the 1991 United States National Junior Team to their best-ever record, at the time. Under Constantine’s leadership, the Sharks had a massive turnaround, finishing 58 points higher in the standings than they did in the previous season, an NHL record.

Constantine led the Sharks to their first-ever playoff berth, but it wasn’t expected to be a lengthy stay for them, as their first-round opponents were the #1 seeded Detroit Red Wings, coached by the legendary Scotty Bowman. However, a late goal by Jamie Baker, in Game 7, disposed of the Red Wings in one of the biggest playoff upsets in NHL history. The Toronto Maple Leafs eliminated the Sharks in 7 games in the next round. They were once again eliminated in the second round in the lockout-shortened 1994-95 season, before a dismal 3-18-4 start to the 1995-96 season led to Constantine’s dismissal.

After interim head coach Jim Wiley was unable to turn the Sharks around for the rest of the 1995-96 season, they hired Sims, who was an assistant coach for the Mighty Ducks of Anaheim at the time.

Sims only saw one season behind the Sharks’ bench, leading them to a 27-47-8 record, once again missing the playoffs. He was fired after the season, making him the shortest-tenured permanent head coach in franchise history. He went on to coach in the IHL, Central Hockey League and ECHL following his tenure in San Jose, but he never found his way back to an NHL coaching job.

Following a two-year hiatus from coaching after stepping down as the head coach of the Blackhawks in 1995, Sutter signed on as the Sharks’ newest head coach. He carried an impressive resume, having led the Blackhawks to three consecutive winning seasons and playoff berths, including a Western Conference Final berth in his last season in Chicago.

Sutter picked up where he left off, taking the Sharks to the playoffs in all five of his full seasons as head coach. However, they were unable to make it past the second round, coming closest to doing so in the 2001-02 season when they lost to the Colorado Avalanche in 7 games. After a 9-12-2-1 start to the 2002-03 season, he was relieved of his duties.

The Sharks didn’t need to wait long to find their new head coach, hiring Wilson, who was fired by the Washington Capitals at the end of the previous season. However, he was unable to turn them around that season, going 19-25-7-6 as they missed the playoffs.

In his first full season, though, Wilson turned the Sharks’ fortunes around. He led them to a 43-21-12-6 record, finishing the regular season on top of the Pacific Division. In addition, he also led them to their first-ever Western Conference Final, facing off against Sutter’s new team, the Calgary Flames.

The ghosts of Sharks’ past continued to haunt them in this series. Goaltender Miikka Kiprusoff, who they traded that season, had a stellar series as the Flames eliminated the Sharks in 6 games. Wilson led them to the playoffs in each of the next four seasons but was fired after they were eliminated in the second round of the 2008 postseason by the Dallas Stars.

On June 11th, 2008, the Sharks hired McLellan, a Red Wings assistant coach, to become the sixth head coach in franchise history. He had won a Stanley Cup the previous season serving under head coach Mike Babcock, coaching the forwards and the power play. Under his tutelage, the Red Wings had one of the best power plays in the NHL, finishing first in 2005-06 and third in 2007-08.

McLellan’s first season in San Jose saw the Sharks have their best regular season ever, finishing on top of the league with a 53-18-11 record, for a total of 117 points. However, this success did not translate to the playoffs, as they were shockingly eliminated by the 8th-seeded Ducks in six games.

McLellan and the Sharks recovered, though, and he led them to two consecutive 100-point seasons and back-to-back Western Conference Final appearances. They won just one game in the two Conference Finals, as they were swept by the eventual Stanley Cup-winning Blackhawks in 2010 and were eliminated by the Vancouver Canucks in 2011 after Kevin Bieksa’s “Stanchion Goal.”

The Sharks made the playoffs in the next three seasons under McLellan but weren’t able to make it past the second round. After a dismal 2014-15 season, McLellan and the Sharks mutually parted ways.

On May 28th, 2015, the Sharks hired Peter DeBoer to become their seventh full-time head coach in franchise history. In his previous stint as head coach of the New Jersey Devils, DeBoer took them to the Stanley Cup Final in his first season but lost to the Los Angeles Kings in six games. The Devils missed the playoffs the next two years before DeBoer was fired by the Devils in the 2014-15 season.

History ended up repeating itself as DeBoer led the Sharks to their first-ever Stanley Cup Final appearance in 2016. However, they couldn’t win it all, losing to the Pittsburgh Penguins in six games.

Related: Where Are They Now? The Jonathan Cheechoo Edition

However, in the 2018-19 season, the Sharks had a memorable, and somewhat controversial, playoff run. They made it to the Western Conference Final, where they lost to the eventual Stanley Cup champion St. Louis Blues in six games. DeBoer was fired 33 games into the 2019-20 season after leading the Sharks to a middling 15-16-2 record.

DeBoer might have taken the Sharks to the Stanley Cup Final, something no head coach has done before, but the greatest coach in franchise history so far, in my mind, is McLellan. He has the highest winning percentage of any coach, at 63.9%.

With that said, McLellan wasn’t a perfect coach and by no means am I saying that the Sharks should have kept him around. Lest we forget, he was behind the bench for that one playoff series in 2014 that I would rather not go into detail about. All things considered, though, the team’s best years so far have been with McLellan at the helm. With Bob Boughner’s status as head coach still interim, it is unknown if the Sharks will make him the 8th full-time head coach in franchise history or if they will turn to the coaching market for outside options like Peter Laviolette.