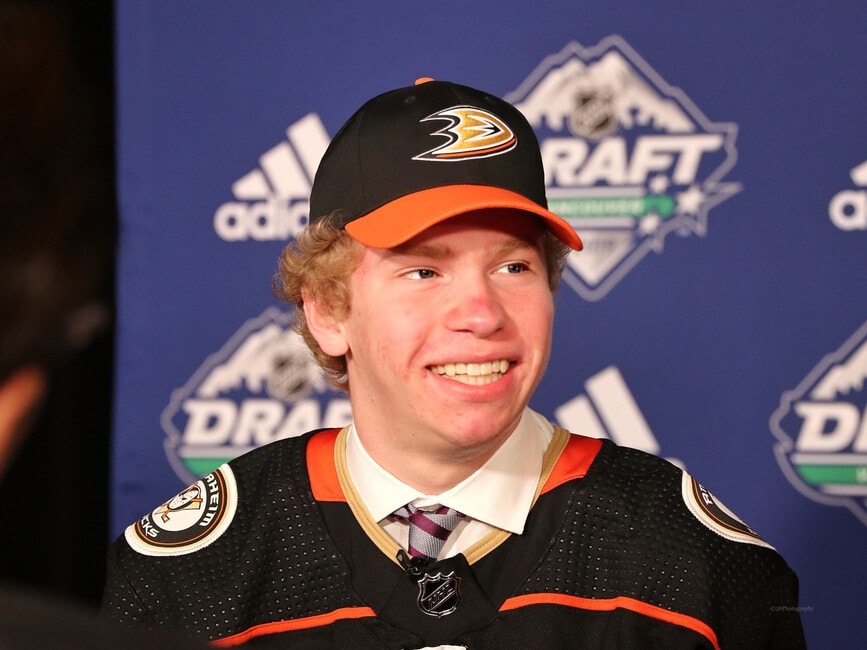 We’re back with a prospect update — what a week it was for some of the Anaheim Ducks’ prospects! It’s time to recap and analyze their performances. Welcome back to our series updating you on some of the Ducks’ top prospects and picks from the 2020 NHL Entry Draft.

Unfortunately, we didn’t get to see Sam Colangelo follow up his performance from last week where he registered his first NCAA point in Northeastern’s 7-0 victory over the University of New Hampshire. Both games that Northeastern had scheduled this week against New Hampshire were postponed as they were supposed to play a home-and-home series on Friday and Saturday.

Going forward, Hockey East announced that the previously released schedules will be withdrawn and that games will be scheduled on a weekly basis from now on. So, until they are announced we won’t know when Colangelo will take the ice again.

If you missed our update on Axel Andersson last week, he picked up his first HockeyAllsvenskan goal in style on a nice give-and-go to complete an impressive rush from the defenseman. It was so good, in fact, that HockeyAllsvenskan named it the Goal of the Week.

Since our last update, Andersson has played in three games for Södertälje SK. They went 1-1-1 through that three-game stretch and Andersson finished scoreless with three shots on goal.

Albin Sundsvik featured in two games for Skellefteå AIK of the Swedish Hockey League last week. He averaged just under 10 minutes of ice time and registered one goal and one assist, both coming in a 4-2 win over HV71. It was Sundsvik’s first multi-point game of the season and brings his totals to three goals and two assists for five points in 25 games played.

With those two points, Sundsvik surpasses his point totals from last year in 10 fewer games. He’s never going to fill the stat sheet, but it’s nice to see some year-to-year improvement in his offensive production.

The University of Minnesota outscored Arizona State 20-2 over their two games last week. That’s not a joke, they secured 10-0 and 10-2 victories to bring their record to 13-3-0. Jackson LaCombe was extremely impressive over the two-game series, recording five assists and scoring points in four of his last five games. Over that stretch he has one goal and six assists for seven points.

Blake McLaughlin was also back to his best, leading the way with four goals and three assists for seven points across those two games. Add in the two points he registered against Wisconsin and McLaughlin now has five goals and four assists in his last five games played.

Jack Perbix even got in on the action despite playing primarily on the fourth line. He went pointless in the opening 10-0 victory, but registered two goals and one assist in the next game. The goals were his first of the season and that brings him within one point of his totals from last season in 20 fewer games.

It was a tough week for Notre Dame and Trevor Janicke. Their weekend series against Michigan didn’t go as planned as they suffered a 5-1 loss in their opener and a 3-1 loss to close out the weekend. Janicke finished scoreless across both games and recorded four shots on goal.

Ian Moore dressed for one of the Chicago Steel’s two game last week and made the most of his opportunity. The Massachusetts-native record one goal and one assist in the Steel’s 5-1 victory over Waterloo. His second multi-point game of the season brings his totals to two goals and three assists in 16 games played.

Nickl was promoted to Rögle’s SHL team on Jan. 2 — he’s skated with the team and been on the roster for seven games so far. However, he’s only actually played in two games so far. Rögle had two games last week and Nickl featured in one of them coming in as an injury replacement and playing 4:34 time on ice.

Artyom Galimov featured in all three games for Ak Bars Kazan last week. The Russian center registered one assist, finished 17-of-35 in the face-off dot and averaged just over 14 minutes of ice time. Through 30 games this season, Galimov has four goals and eight assists for 12 points.