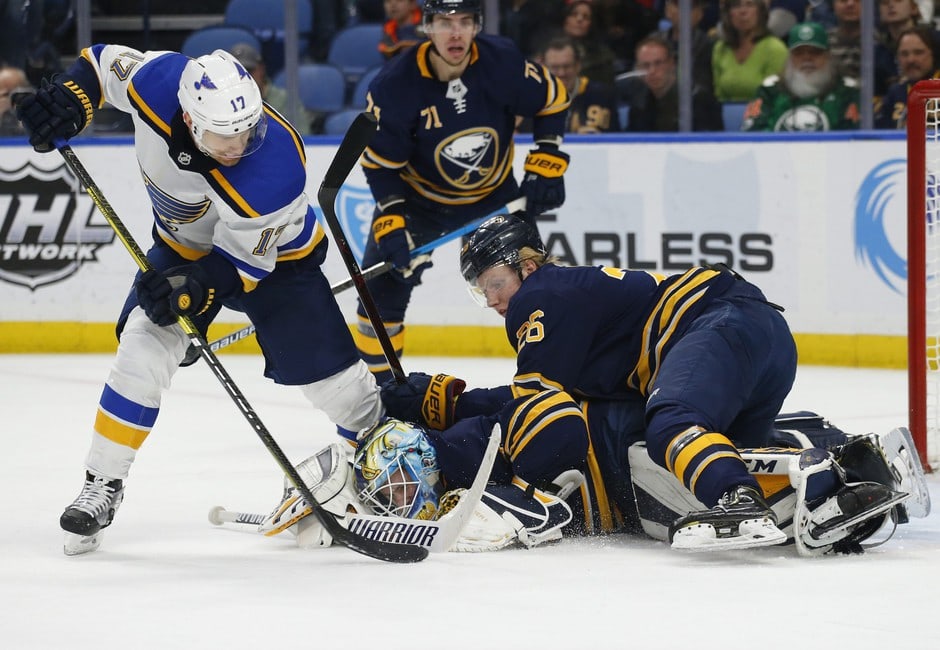 In the second period of the Buffalo Sabres’ 3-0 loss to the Philadelphia Flyers on Tuesday night, Brandon Montour laid a hit on Ivan Provorov who went flying into goaltender Carter Hutton. Provorov’s arm and torso collided with Hutton’s head and body, as Hutton’s mask made contact with the goal post before flying off his head. Buffalo’s net flew off its moorings and play stopped.

After Sabres broadcast host Dan Dunleavy and analyst Rob Ray commented on the replay on MSG, Ray said of Hutton:

“His head goes right off the post…still having the helmet on at the time it hit the post, which is a good thing. But you gotta [sic] understand he’s Northern Canadian boy right there, and he’s gonna [sic] be able to bounce back. He’s not from the West and he’s not from Quebec. He’s good [sic] Northern Ontario boy. He’s ready to go,”

Play resumed and Hutton stretched across his crease to make a crucial save. Ray added, “That was a huge save and him coming off, as you said, that hit to the head just previous [sic] stoppage of play…there’s no question that he’s bounced back and he’s fine.”

Hutton stayed between the Buffalo pipes for the remainder of the second period, but he was relieved by Jonas Johansson at the start of the third period. In Buffalo’s postgame media availability, head coach Ralph Krueger was asked if Hutton’s absence was related to the Provorov collision:

“He’s under assessment here tonight and it was really disappointing…to lose, midway through the game, a very, very strong Carter Hutton,” Krueger said. “He seemed to or didn’t feel the effects of the hit actually, which can happen sometimes, until the intermission when he got in and he sat down. So, I think his adrenaline kind of kept him going.”

Before I dive into Ray’s second-period commentary, I’d like to clarify three things. First, it’s not my intention to criticize Ray’s playing career, question his broadcast qualifications or address other aspects of his broadcast analysis. Second, I’m aware of the deeply ingrained culture of lionizing hockey players who, for better or worse, frequently compete through injury. And third, many sports broadcasters casually refer to athletes having their “bell rung” with little thought about the consequences of such commentary.

Still, there’s no longer an excuse for making light of a head injury on a broadcast that reaches hundreds of thousands of viewers.

Before we acknowledge that Ray or anyone could not have known that Hutton had suffered a potential brain injury, consider that the Concussion Legacy Foundation’s publicly available media toolkit classifies head impact — like Provorov’s arm to Hutton’s mask — as a possible concussion mechanism. And the concussion protocol published by the NHL and NHLPA lists a blow to the head as a key component in identifying possible concussions.

With that in mind: Ray lacks the medical credentials to evaluate Hutton (from his booth located 384 miles away in Buffalo for Tuesday’s pandemic-friendly broadcast, no less) nor can he conclude that “he’s bounced back and he’s fine.” Ray also never referenced any confirmed reports about the health or injury to Hutton’s brain after the impact.

Nevermind the “Ray was just kidding” or “you’re taking him too seriously” nonsense. Potential brain injury is no joking matter. We’ve lost too many athletes to traumatic brain injury already. Even Ray has advocated for the league to pay for medical care associated with post-concussion symptoms (from, 16 ex-Sabres among 104 fighting to force NHL to pay for medical care for post-concussion symptoms, Buffalo News, 7/20/16).

No matter Ray’s intentions, the net effect here is to normalize and praise an athlete who competes through injury. And we all know I’m not talking about playing through a shin bruise from a blocked shot. I’m talking about competing through potential brain injury, which, if it hasn’t been made clear enough, can carry career- and/or life-altering consequences.

Well-intentioned viewers might take Ray’s commentary to heart without any kind of critical examination:

Sure, you might find one or all of those examples extreme. But they’re not implausible. I can’t imagine Dunleavy, Ray, Pegula Sports & Entertainment or MSG want the repercussions of a Sabres broadcast to endanger their viewers’ wellbeing.

While Dunleavy and Ray expressed concern about Hutton’s health in the second and third periods, both missed several opportunities to explicitly mention the relevant concussion protocol. At the start of the third period, Ray continued to speculate about Hutton’s status before Dunleavy said:

“And we remember in talking about stories like this, there are always a number of eyes watching players who take or are on the receiving ends of hits like that so there’s probably a path to how this came to be because certainly Carter Hutton was playing well,”

So, many eyes are watching players when they get hit and something happened. Got it.

It would be unreasonable to expect Dunleavy or Ray to memorize every single word of that concussion protocol or the entire media toolkit referenced above (though a diligent broadcaster might have one or both resources within arm’s reach). And no matter how strong the relationships between the broadcasters and the Sabres communications staff, it has to be incredibly difficult to verify breaking information during a remote broadcast.

But sharing broad strokes about what might trigger further medical evaluation could have helped viewers understand the response required from medical professionals when a hit to the head is followed by other concussion signs. Without diagnosing Hutton, Ray or Dunleavy could have clearly pointed out those signs, like the extra time Hutton took before returning to his feet. Referencing just a fraction of that media toolkit might have prevented inaccurate or unverified information from being broadcast to hundreds of thousands of viewers.

Per the experts at the CLF, “If children watch reporters accurately identify concussions and discuss that they are a serious injury that requires a specific response, there is good reason to believe they will be more likely to behave appropriately when confronted by concussions in their own lives…Accurately identifying the signs will help children to recognize those signs in their teammates and friends. By reporting what you see, a child will do the same in the future.”

To be sure, there is no confirmed report that Hutton was diagnosed with a concussion. But we know there are ways to report on possible head injuries or concussions more professionally. We’re aware of the consequences of head impact and the brain injuries that can stem from those impacts. We know more head impacts are coming, no matter how many safeguards or deterrents the league employs.

Here’s to encouraging Ray and broadcasters around the league to rise to the occasion when the next head impact occurs. Tomorrow’s NHLers are watching.