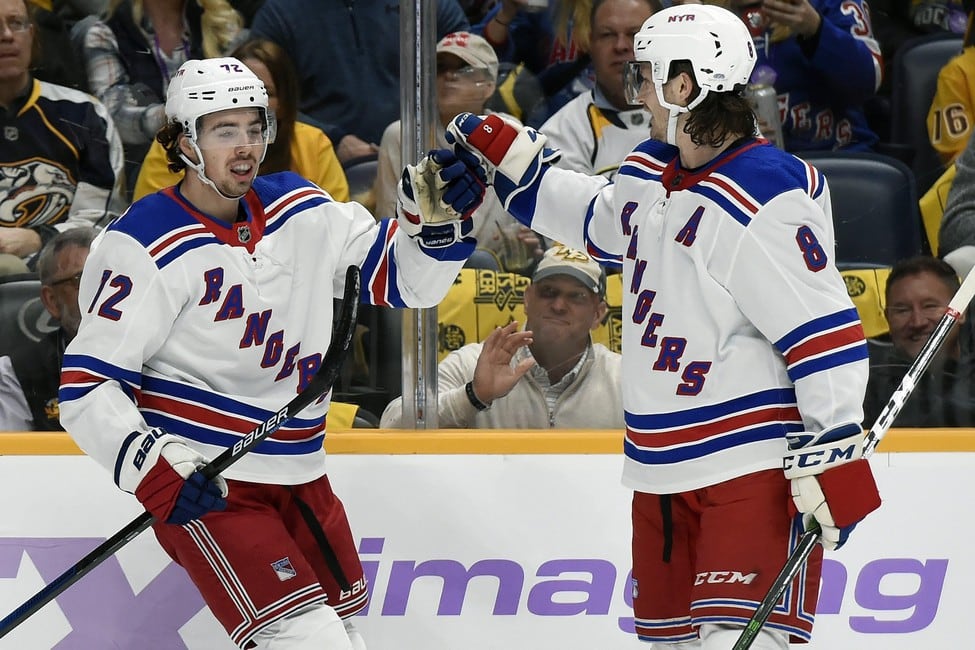 There are a lot of unknowns regarding the status of the 2020-21 NHL season, let alone this year’s New York Rangers squad. General manager Jeff Gorton and President John Davidson won’t explicitly tell the media that the rebuild is nearing completion, but when you see the talent level currently in Rangers’ blue, we know that to be the case.

We continually hear about the prospects in the pipeline, both those who are currently vying for a roster spot and those who are still one year away. The plethora of talent in the Rangers’ system is superior to most, and when glancing at 2021-22, it is evident that the youth movement will be complete.

Cap space will be aplenty, a necessity considering Filip Chytil, Julien Gauthier, Pavel Buchnevich, and Brett Howden will all be free agents. Will they bring all of them back? That remains to be seen, but the ability to keep them gives the Rangers numerous options next season. Howden and Buchnevich appear to be the two in that group that are more likely to depart, with Chytil and Gauthier remaining.

Before getting too far ahead of ourselves, let’s look at what the 2021-22 lineup could potentially be:

This offensive unit would add Kravtsov and Barron to an already dangerous bunch, increasing their already prevalent offensive output. Barring any moves, this group still poses as one of the league’s best, especially if the younger players continue to take strides.

Defensively is where the Rangers make their biggest improvement, adding an influx of youth to replace some aging veterans.

Adding Miller and Lundkvist to this group increases the defense’s speed and skating ability, which can help alleviate the Rangers’ tendencies to get pinned in their own end. The best defense is a good offense, and the ability to break out of your own end efficiently will lessen the number of high danger chances the Rangers will give up on a game by game basis.

Looking at the Cap Situation

It remains to be seen whether or not the salary cap will have a slight increase in 2021-22, but odds are the cap stays relatively flat. If that were the case, the $81.5 million cap-ceiling would remain, and the Rangers would have approximately $27.7 million in cap space. That space would be allocated to re-signing the aforementioned RFAs and incorporating the contracts of Kravtsov, Barron, Miller, and Lundkvist.

If the Rangers do keep all these players and add in the new rookies, they still will be left with a hefty amount of cap space. The Rangers could use this cap to start re-signing key pieces such as Mika Zibanejad and Adam Fox or target some of the talented UFA’s on the open market.

Defenseman Dougie Hamilton will be available after the 2020-21 campaign and could propel the Rangers defense to new heights. Phillip Danault, Ryan Nugent-Hopkins, and Alexander Wennberg will all be on the market as well, though the Rangers’ need for offensive firepower is minimal at best.

As crunched up as the Rangers have been against the cap the last several years, 2021-22 gives them a window of opportunity to breathe, allowing them to get the contracts they need to have situated in order.

Youth Movement Will Be Completed

Rangers prospects’ landing date has been a hotly debated topic of late, especially with the uncertainty that COVID-19 places on players’ development. With Jack Johnson and Brendan Smith coming off the books after this season, the Rangers will turn to their young defensemen to fill those vacancies. Miller and Lundkvist seem to be the front runners, but Matthew Robertson, Tarmo Reunanen, and Yegor Rykov will be eyeing those openings as well.

Lundkvist has underwhelmed so far in the SHL, playing solid defensively but tentatively in the offensive zone. The Rangers are still high on him, as they should be, but are equally high on Miller, who is currently not playing due to these unique circumstances. The Rangers’ assistant GM, Chris Drury, shared his thoughts on Miller’s development with Vincent Z. Mercogliano of Lohud Sports:

The hardest transition for anyone coming out of college or juniors or Europe — one of the toughest spots is D. There’s always some kind of learning curve and some time needed to learn the pro game.

That transition will be made more challenging by the lack of game action Miller will have seen by the time training camp commences. At 6-foot-5 and 210 pounds, Miller is a physical specimen with the physical part of the game down pat, allowing the defensive part of hockey to come naturally. Yet, even the best need some time to regain their rhythm, and I expect Miller to have an adjustment period.

The most tantalizing prospect getting added to the mix in 2021-22 is Kravtsov. His innate scoring ability seems to have been complemented by a solid two-way game since this KHL season has started. He had tallied eight goals and three assists in 21 games for Traktor of the KHL, exemplifying an elite offensive ability that the Rangers were so fond of when they drafted him.

Kravtsov has the ability to enter the lineup as early as this NHL season, depending on when the KHL season ends, but all signs point to 2021-22 being his first full campaign. He will be playing with young and talented forwards, putting him in a position to excel offensively, earning the trust of David Quinn.

Kravtsov and Miller may be joined by Barron, Lundkvist, and others, all of whom would play alongside a Rangers team that enters the 2020-21 season with an extremely young average age of 25.2.

What are the Expectations?

Unforeseen events change expectations every season, whether those come from injuries, trades, or even a pandemic. For the Rangers, a playoff birth in 2020’s 24-team playoff is just the beginning of what they hope will be another playoff run in 2020-21.

From my perspective, and I believe the Rangers share this sentiment, 2021-22 is truly their first season as contenders since the rebuild was declared in 2018. The leap can be made with the emergence of young stars on both sides of the puck, aided by youngsters Kravtsov, Miller, and Lundkvist.

If Lafreniere, Kakko, and Chytil take the strides we all believe they will take, this Rangers team has playoffs written all over them. There is still a whole season between now and the 2021-22 Rangers, one which fans should be ecstatic about. But it is never too early to take a glimpse at what could be, and the 2021-22 group has the chance to be special.