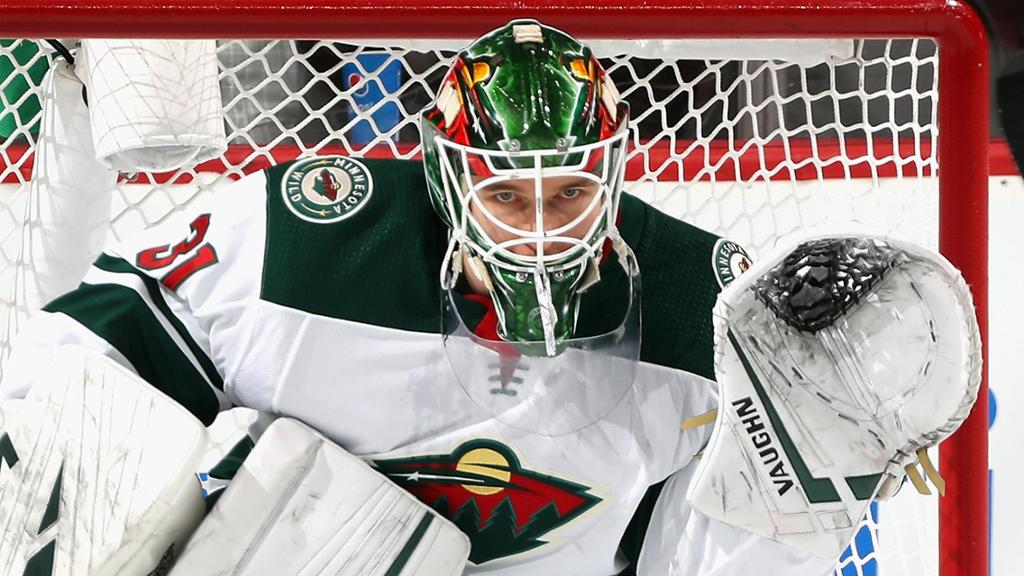 There’s no doubt that, whenever the 2020-21 NHL season gets underway, things will look very different in the Wild’s goal crease.

With Devan Dubnyk now in San Jose, the team signed veteran Cam Talbot to be the top goaltender. Alex Stalock returns to provide a quality No. 2.

But don’t count out the man who may very well be the future of the position in Minnesota, Kaapo Kahkonen, who signed a two-year contract with the club earlier this month.

A native of Helsinki, Finland, Kahkonen will embark on his third season as a pro and his first with some NHL experience under his belt.

Just 24 years of age, Kahkonen came to North America two years ago and burst onto the scene with an AHL All-Star Game appearance as a rookie. But his play stumbled down the stretch, with a combination of a new league, a new routine and a bout of homesickness wreaking havoc on his game.

It was an experience Kahkonen learned and grew from.

“The first year over in North America, there certainly were a lot of new things for me, especially off the ice,” Kahkonen said. “The second year, I felt a lot more comfortable coming in and it just allowed me to focus on being myself and playing hockey, and that way the results are usually as good as they can be.”

Those results spoke for themselves.

Kahkonen was named the American Hockey League’s Goaltender of the Year last season, posting a 25-6-3 record with a .927 save percentage and a 2.07 goals-against average.

Because of the pandemic, the AHL cancelled the rest of its schedule with only a couple of weeks remaining in the regular season. Kahkonen seemed primed to gain his first professional playoff experience for an Iowa team that was one of the best in the AHL.

Kahkonen was with Minnesota in the postseason in bubble in Edmonton, but did not play in a game.

The way Kahkonen’s new contract is structured provides at least a blue print for him to reach the NHL.

This upcoming season is structured as a two-way, which means the team can move Kahkonen between Minnesota and Iowa freely. If both veteran goaltenders show up and perform up to their expected levels, Kahkonen will likely begin the season gobbling up a majority of the minutes in Des Moines, where his development will continue.

But the deal changes to a one-way contract in the second year, meaning the Wild would have to send Kahkonen through waivers first in order for him to play in Iowa.

That’s a risky proposition for a goaltender who would be just 25 at the time and has shown good pedigree in two years of pro hockey in North America.

“I think it’s a good deal for both sides,” Kahkonen said. “The second year is a one-way, so that gives you a little idea of what the plan might be for me to be up with Minnesota.

“But nothing is given and you still have to earn everything. It might happen before the second year of that contract. You never know.”

Kahkonen’s taste of the NHL last season has certainly made him even more excited for a longer, more permanent stay. He made his NHL debut in New Jersey on Nov. 26 and made 32 saves in a 3-2 Wild victory.

One week later, he backstopped Minnesota with 44 saves in a 4-2 win at Florida.

“It was an awesome experience and something I will remember for the rest of my life,” Kahkonen said. “The confidence you get … You don’t know if you can play in the NHL before you play games. I’ve got five of them right now. I think I did a good job, I feel good about my game but obviously, I want to play many more games.

“But for sure, [that experience] will help me along the way.”

As a young player just arriving in the NHL, Kahkonen was quick to credit both Stalock and Dubnyk, two veterans who helped him adjust and supported him along the way. While competition up and down the roster is expected, 12 forwards play on a given night, along with six defensemen.

There’s only one crease, but Kahkonen said he was never uncomfortable. He doesn’t know Talbot, but from everything he’s heard about him, Kahkonen said he expects that same vibe to continue moving forward.

“You put your skates on and you go on the ice and you do your best to get as many playing minutes as you can and help the team win that way,” Kahkonen said. “But when you don’t play, you support the guy who is playing because it’s still a team game.

“I think when you have good people around, you can learn from them and have a chat and discuss different things. You can always try and learn from that.”