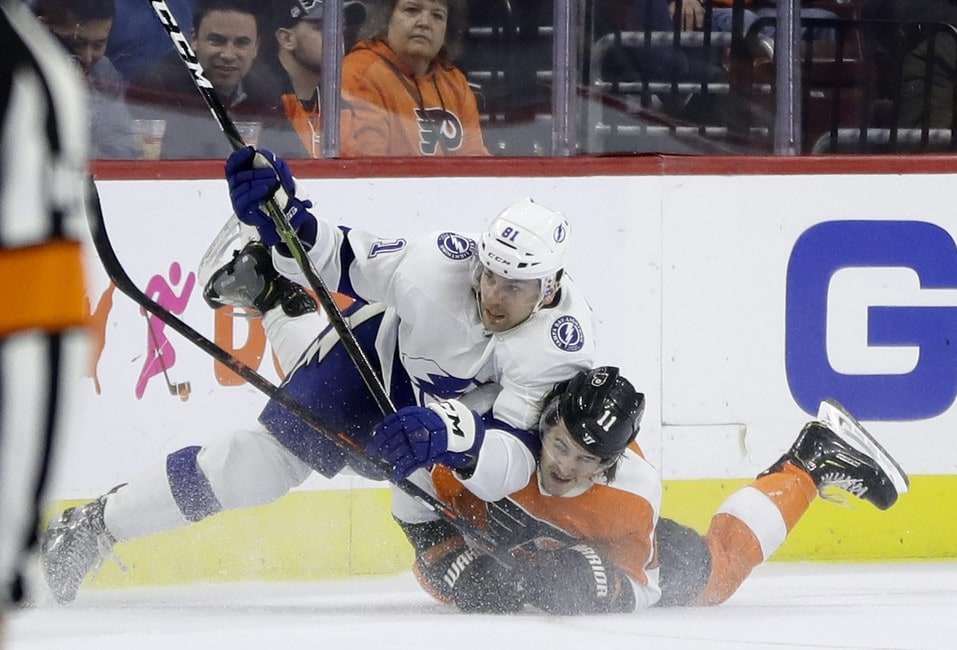 The Philadelphia Flyers fell one game short of making it to the Eastern Conference Final this year. There’s no reason to overreact, trade the young talent, or start asking to move the core. Certainly, there were mistakes needing adjustment and players who could’ve performed better, but there’s really no reason to be alarmed. Let’s not forget this is a team that finished the regular season 13 games early, with 89 points. They were 9-1-0 in their final 10 and with a full 82-game season were on pace to have 105 points, which would’ve been their best since 2010-11. Who knows what could have happened with all that momentum rolling into the playoffs had there been no pause. What did they do wrong that the Stanley Cup champion Tampa Bay Lightning did right?

There’s no perfect plan to create a Stanley Cup-winning team and the Flyers aren’t far off from being there. That doesn’t mean the most recent champions aren’t the perfect team to model your game after. Sure, the Flyers did a lot right, and even outperformed the Lightning in the round-robin games, but what could they learn from watching the 2020 Stanley Cup champions?

The best team in the league sometimes made it look easy in places the Flyers struggled, specifically against the New York Islanders. The Lightning were swept in the first round by the Columbus Blue Jackets in the 2020 Playoffs and changed very little about their team. There are a few differences between the Flyers and the team who won their second Stanley Cup in franchise history.

Best Players Step Up When It Matters Most

Something the Flyers failed to do quite a bit in the playoffs is something rather vital to the success of any team — score goals. It had a tremendous amount to do with the team matchups. Both the Montreal Canadiens and the Islanders’ seasoned coaches Claude Julien and Barry Trotz knew what they were getting into against the high-powered Philadelphia squad. Both teams played a very intense, shutdown defensive trap, capitalizing on every opportunity to score they could scrounge together.

The Flyers excelled during the season at outshooting opponents and driving the middle, creating offense through high shot volume and their multitude of offensive weapons. Turns out, that is exactly the opposite of how to play against the trap. However, that’s no excuse as chances came and the best players didn’t capitalize on their opportunities very often.

The Lightning have depth. There’s no doubt about it. Head coach Jon Cooper feels comfortable rolling four lines and each of them is almost as effective as the last. But at the end of the day, the guys you expect to score more than others, need to do just that. For the Lightning in the playoffs, that wasn’t a problem. Let’s compare the top three regular season scorers from each team, factoring in Victor Hedman over Steven Stamkos for the Lightning since Stamkos was injured for most of the playoffs.

There’s nothing to say about those numbers other than they’re completely unacceptable. A team’s top players need to be just that when the games really start to matter. It should be noted that Sean Couturier played a few games in the Islanders series on a torn MCL, which he seems to have made a habit of doing. Twenty-four goals from Travis Konecny in the regular season, and zero in the playoffs is just one of the things separating this team from being where the Lightning are today.

Of course, the Flyers already have the answer on the roster in Nolan Patrick. But with his health status being a complete toss-up for the time being, the Flyers may have to get a little crafty to fill that gap. Nate Thompson was primarily in the position during the playoffs, and when he was up against the 3C of New York, Jean-Gabriel Pageau, there wasn’t much of a contest.

That’s no longer a problem, because Thompson was a deadline acquisition on the final few months of his contract and won’t be returning. The Flyers have young players ready to return to the lineup in place of Thompson and Derek Grant already. Patrick, Morgan Frost, and of course Oskar Lindblom are a major part of the Flyers’ offense and will definitely fill those gaps.

The Lightning’s third-line center during the playoffs was Yanni Gourde. Along with wingers Barclay Goodrow and Blake Coleman, they effectively performed the perfect job of a third line. Tight checking, solid defense, and each one of them can put the puck in the net if the opportunity presents itself. Gourde finished the playoffs with 14 points compared to Thompson’s one. Not that all the eggs should be placed in the points basket of a third-line center, but 14 points compiled with the multitude of other things Gourde does for his team and you start to notice the massive difference between him and Thompson.

Simply put, the Flyers did not score on the power play enough. The Lightning finished their playoff run with a power-play percentage of 22.2%. Compared to their regular-season percentage of 23.1%, that’s what you’d expect from a championship team. The Flyers were similar in power-play prowess during the regular season, finishing their 69-game season scoring 20.8% of the time. Then they got to the playoffs, scoring just 7.7% of the time.

That astoundingly low number was good enough for 23rd in the playoffs, ahead of only the New York Rangers who were swept in the qualifying round. If the Flyers were able to reach at least their regular season numbers in the playoffs, it’d have been good for… seven, eight more goals. When you’re only a game away from making it to the Eastern Conference Final, that’s a darn lot.

There’s no doubt the Flyers’ power play will get back on track at the start of the 2020-21 season, but it needs to continue rolling into the playoffs. If head coach Alain Vigneault needs to keep testing line combinations, fire Michel Therrien, or anything else to get it done, you can bet he will. The team cannot go through another playoff run of scoring less than 10% of the time they’re on the power play. Stanley Cup champions do not score so few power play goals because champions don’t miss out on opportunities.

A year after being swept in the first round of the playoffs by the eight-seeded Blue Jackets, the Lightning are Stanley Cup champions. They didn’t disassemble the team or make any major changes. The Lightning knew what they had in their players and trusted them to make the necessary changes in next season’s playoffs — it paid off. The Flyers need to do the same. Make some small changes, enter the 2021 Playoffs more prepared, and trust that the roster who was one game away from the Eastern Conference Final has enough in the tank to get further next time.