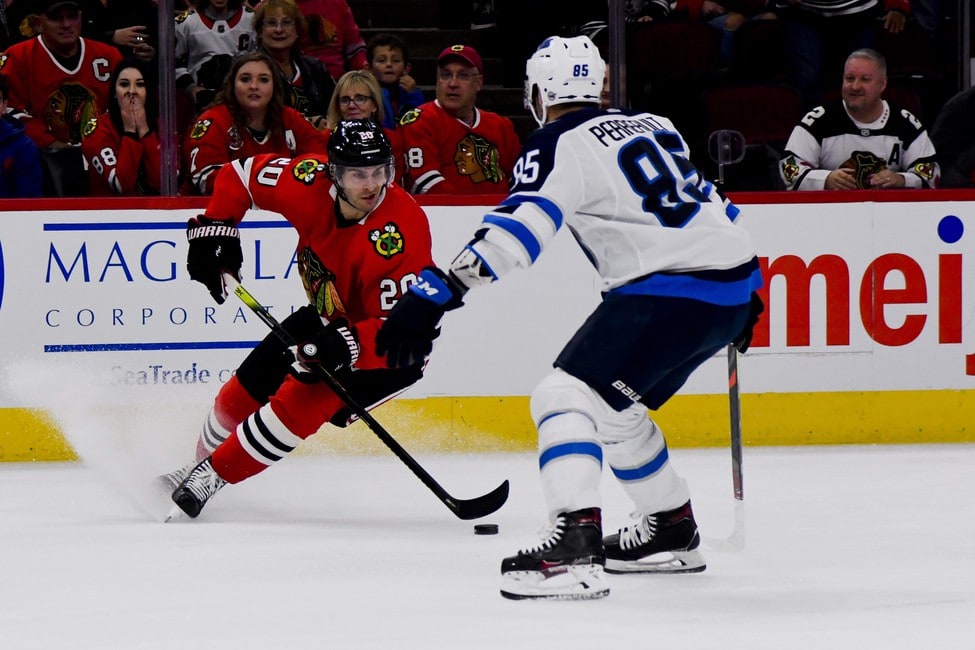 As we head towards the end of September in this crazy year of 2020, we’re still awaiting the recipient of the Stanley Cup. Nevertheless, it’s just a few short months until the 2020-21 NHL season is set to begin on Dec. 1. The Chicago Blackhawks currently have limited options for roster changes based on some heavy contracts, and the salary cap remaining flat due to the COVID-19 pandemic. I’m sure general manager Stan Bowman will surprise us with some unexpected trades and adjustments. But for the most part, it’s anticipated that a very similar Blackhawks’ team will return next season.

With that in mind, it’s never too early for some lineup projections. Let’s review what we know from last season to make some predictions for next season. For the purposes of this exercise I will mostly be examining the current roster, with some educated guesses regarding the pending free agents. This will then give us an idea of where the holes are, and where the prospects and other new faces might fit in. It will also help us determine what to watch for as we head into training camp in November.

Here are the Blackhawks’ forward lines, defensive pairings and goaltending from their last win; Game 4 versus the Vegas Golden Knights in the first round of the playoffs. They prevailed in this contest 3-1, incidentally with goals from Drake Caggiula, Matthew Highmore and Alex DeBrincat. This lineup is also indicative of what head coach Jeremy Colliton utilized for much of the nine games of their playoff run. It’s a good starting point for our projections.

Let’s start with the obvious. Kane and Toews aren’t going anywhere. They’re both still the faces of the franchise and the leaders of this team. Not to mention their matching $10.5 million cap hits and no-movement clauses. DeBrincat starts his new three-year contract extension with a $6.4 million annual cap hit this coming season. Despite his drop in production this past season, I’m confident the organization is committed to the 22-year-old remaining a Blackhawk. Dach’s rookie season turned out even better than expected. The 2019 third overall draft pick is arguably the new future of the franchise. And Bowman wouldn’t be stupid enough to not re-sign Kubalik, the 30-goal-scoring rookie, would he?

Saad has been the subject of trade rumors practically since he returned to the Blackhawks in the 2017-18 season. But I believe the organization will keep him around for the final year of his contract, despite his $6 million cap hit. There just isn’t another power forward-type player to replace him at this point. And he’d be hard to trade in the current market where nobody really has any money to work with.

Moving on, the entire fourth line of Highmore, Kampf, and Carpenter are all very serviceable depth players that are signed for cheap. Expect them back. The same goes for Nylander. Ok, well the cheap part I mean. But the Blackhawks gave up defensive prospect Henri Jokiharju for Nylander. They’ll probably hold unto him just to save face. Plus, he’s still young (22) and shows potential to grow into his raw talent. Perhaps he needs some more seasoning (hint, hint) in the American Hockey League.

That leads us to the following lineup:

Ah, now on to the current free agents besides the aforementioned Kubalik; Strome and Caggiula. One can never have too much center depth, which is why it would behoove the Blackhawks to re-sign Strome. But will there be enough money for him? He’d have to sign for cheap, which is definitely an option considering he didn’t have the greatest 2019-20 season. He’s in a position where he must prove himself again; but he could likely sign for more money elsewhere.

The team also needs to consider Andrew Shaw, who alleges he’ll be ready to go next season after missing much of last season with concussion issues. But again, in this market who wants a $3.9 million forward with an ongoing concussion history? The Blackhawks are probably invested in Shaw as well. Which unfortunately leaves Caggiula the odd man out, since he plays a similar game as Shaw.

Finally, do you guys remember Zack Smith? Apparently the Blackhawks don’t, because he’s not even listed on the roster of their official website. I’m guessing that doesn’t bode so well for Smith remaining on the team. As Greg points out in his latest news and rumors, the veteran forward is a prime candidate for a buyout. Gaining some money back on Smith’s $3.25 million cap hit would be awfully helpful considering the limited wiggle room in other areas, as I’ve described above.

Shaw would be best utilized in a bottom-six role, so I would swap him and DeBrincat. This scenario says goodbye to Caggiula and Strome and leaves us here; with not enough center depth and also not really much change from last season’s roster.

Let’s discuss each defensive player one by one.

Keith might be slowing down, but he’s still your top pairing defenseman for a few more years. He can play in all situations and he eats up big minutes. He takes on the top competition and has the experience to do it. He might not have the raw talent anymore, but he has experience on his side.

Boqvist was inconsistent during the regular season and regressed in the playoffs. But let’s also remember he was pushed into NHL service probably a year before he was ready. His learning curve has been against the big boys, and hopefully this will serve to help him in the long run.

I feel like a broken record, but I’ll say it again anyway. Murphy was arguably the Blackhawks’ best overall defenseman this past season. He’s signed for relatively cheap ($3.8 million annually for the next two years), and the blueline desperately needs him to keep up the good work.

De Haan is a solid and experienced defenseman that is also signed for two more years at $4.5 million. Kinda steep, but that’s only $500,000 more than Maatta. And when healthy he’s extremely more valuable than Maatta. In this writer’s opinion they should keep him around and hope he stays healthy.

As hinted above, Maatta is a prime candidate for a buyout on the defensive end, despite his success in the playoffs. Based on the Blackhawks’ talented prospects coming up on the blueline, it’s a no-brainer to buy him out.

If the Blackhawks do re-sign Koekkoek, he could feasibly end up as the seventh defenseman like he was for most of the past season. Does he want to do that versus being a regular player on another team? I think Koekkoek will move on to greener pastures outside the organization. And best of luck to him!

Nick Seeler is the forgotten Blackhawk on defense similar to Smith on offense. At least his name is on their website. Seeler was claimed off waivers last February from the Minnesota Wild, mostly as an insurance policy while the Blackhawks suffered from injuries on the back end. He’s not needed anymore, and I would expect him to be traded or buried in the AHL.

Finally there’s the elephant in the room, Brent Seabrook. This 35-year-old, three-time Stanley Cup winning defenseman has made it clear he’s coming back one way or the other next season. Since his colossal contract will be very hard to move, look to see him on the Blackhawks’ back end. Seabrook has put in the time and the determination to potentially return from two hip surgeries and a shoulder surgery. He even made a point to participate in the optional skates before the official training camp after the COVID pause this past summer.

One would think Seabrook’s best days are behind him; and they probably are. But he could still be a very serviceable third pairing defenseman and a huge veteran mentor for the team. Let’s hope for a success story here: for Seabrook and for the Blackhawks.

Based on the above, here’s what the Blackhawks’ defensive pairings will look like headed into the 2020-21 season:

Look for these prospects to be making a run for those final two spots: Ian Mitchell, Lucas Carlsson, Nicolas Beaudin, Dennis Gilbert and Wyatt Kalynuk.

The Blackhawks have purportedly offered two-time Cup winning netminder Crawford a one-year deal worth $3.5 million. I think the organization and Crawford are both being realistic about this situation. Crow is an elite and proven goaltender, yes. But he’s also 35 years old and has a concussion history. A short-term contract makes sense, and the promise to give him the bulk of the games could make up for the lack of money in the Blackhawks’ offer. Long story short, the two parties will find a way to make it work.

After that, Subban won’t be re-signed. Collin Delia will be the backup and eventual heir to the throne when Crow decides to hang up his skates. Which hopefully won’t happen until after next season, giving Delia ample time to prepare himself for the starting role.

As you can ascertain, the Blackhawks don’t have a whole lot of flexibility headed into the 2020-21 season. It will be interesting to see what kind of moves Bowman will make, and who he will re-sign or buy out in the coming weeks.

Who will fill the holes listed above? I believe it will mostly be the youth and prospects stepping in. The good news is we won’t have to wait much longer to find out.

Habs Have the Best Fan Culture in the League
Top 10 Russians in the NHL Today
Islanders Will Ultimately Benefit From Trading Toews
Hurricanes sign Bracco, Gust, Rempal
Who Does Taylor Hall Push Out of Sabres’ Top 6?