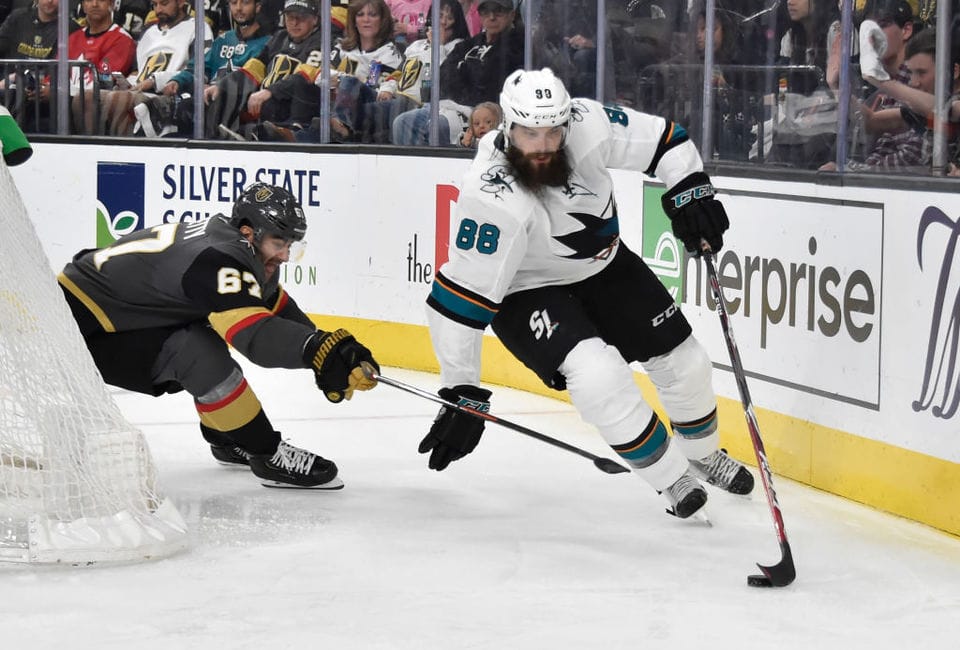 As we reach the culmination of the strange but wonderful 2019-20 NHL season, it only feels appropriate to speculate about what the future holds. While the uncertainty of COVID-19 and all that comes with it continues to loom ahead, one thing is for certain: we will soon have 32 NHL teams competing for Lord Stanley’s Cup. Here’s a look at three bold takes on who could be wearing a new set of threads as the Seattle Kraken begin to chase down the Cup in 2021-22.

When looking at the productivity of the San Jose Sharks’ lineup over the 2019-20 season, it looks to be a lock on the team opting for the 7-3-1 protection model. Timo Meier, Logan Couture, Evander Kane, Tomas Hertl, and Kevin Lebanc were the team’s top five scorers. As the team looks to be going into a rebuild, or at least a re-tool, keeping the relatively young, productive core together would be key. The seven forwards should be rounded out by Jonathan Dahlen, who has become a bona fide star in Europe, and Marcus Sorenson who can provide consistent depth scoring.

On the blue line, two out of the three spots are a lock due to the no-movement clauses of Marc-Edouard Vlasic and Erik Karlsson. The third spot is where we have the debate. While it may seem illogical to offer a consistent Norris-caliber defenseman to a divisional opponent for free, it is important to remember that Brent Burns isn’t cheap, nor is he young.

When the expansion draft rolls around, he will be 36 and carry an $8 million price tag. Granted, the final four years of his deal after that will be at a significantly lower rate, but the big chunk of cap hit during the expansion season is something the Sharks would benefit from unloading.

From Seattle’s perspective, they would be killing two birds with one stone by taking on a big contract to help them reach the cap floor, as well as getting a big, star defenseman, which they’ll need in a physical Pacific Division.

This is a little bit of a hypothetical because Jacob Markstrom is set to become a free agent this year. Realistically, however, it would be in the Vancouver Canucks’ best interest to sign him to an extension, giving themselves a buffer window for youngster Thatcher Demko to get comfortable in the number one role.

Demko had a little bit of a coming-out party in this year’s playoffs against the Vegas Golden Knights. When Markstrom went down injured, it looked as though the series might be over sooner rather than later, until the young American came in and stole the show. Demko’s three starts against the Golden Knights saw him peppered with 130 shots, of which only two got past him. His 2020 playoff numbers wound up being a 0.65 goals-against average (GAA) with a .985 save percentage (SV%). Talk about baptism by fire.

While the playoff performance didn’t come out of nowhere, it was certainly a shock given that Demko only had 25 starts during the 2019-20 shortened season. By no means was he unimpressive across his regular-season outings, earning a .905 SV%, it just wasn’t even in the same stratosphere as his super-human playoff performance.

This is where the value in keeping Markstrom comes into play. While Demko got a taste of what it feels like to be the team’s starter, he lacks the consistent experience of being the No. 1 guy night in and night out. If the team brings Markstrom back, they can ease Demko into being the default starter using a tandem system.

When it comes to then protecting one netminder over the other, the logic lies with Demko as he is the younger of the two and has already shown glimmers of being able to handle the pressure. The Canucks team is coming out of a rebuild and is filled with young guys who have the makings of a strong core for years to come. It simply makes more long-term sense to include the young goalie in with that and riding the wave of the youth, while supplementing with grittier, veteran skaters where necessary.

On Seattle’s side, selecting Markstrom from the Canucks would be a little bit of a no-brainer when you look at the other names likely to be exposed. At this point, it looks like the list of available Canucks would contain Antoine Roussel, Jay Beagle, and Loui Eriksson, who are all players who can contribute, but are not integral pieces to expansion success. Markstrom, on the other hand, offers Seattle a reliable backup goaltender, a commodity that may be hard to come by via any other route.

The Edmonton Oilers have one of the most “no duh” protected lists with names like Connor McDavid, Leon Draisaitl, and Ryan Nugent-Hopkins (should they be able to re-sign him). Once upon a time, Jesse Puljujarvi may have found himself on that list if it weren’t for the organization’s poor handling of the youngster’s development and the tensions that those decisions bred.

Puljujarvi spent the last season playing for Karpat in the Finnish Liiga after the player and his agent made it clear they wanted a trade away from the Oilers organization. While overseas, he posted 24 goals and 29 assists over the course of 56 games and looked miles ahead of the competition. This comes after what could be, at best, considered mediocre production in the NHL (37 points in 139 games).

The young Finn was drafted to be a scorer and finally seemed to find his groove while playing in his home country, proving that sometimes maybe a change of scenery is what you need to get going. While there is an inherent risk involved with picking him given his NHL body of work, there is a very high chance that he will produce closer to the rate that he did in the Liiga with an NHL franchise not based out of Edmonton.

Related: The Day the Stanley Cup Was Stolen

Seattle would be securing themselves a player with potentially untapped potential, while Edmonton would have the benefit of not losing someone on their actual roster. There is no telling how Puljujarvi would develop when given the chance to do so on a brand new NHL team, but his resurgence and improvement in Finland should be promising enough for the Kraken to take the gamble.

In reality, it may be too early to predict exactly who is going to get Kraken out of the Western Conference, but that doesn’t mean we can’t try. Do you think we’ll see these guys rocking Seattle colours, or will a different batch of names dawn the “S”?