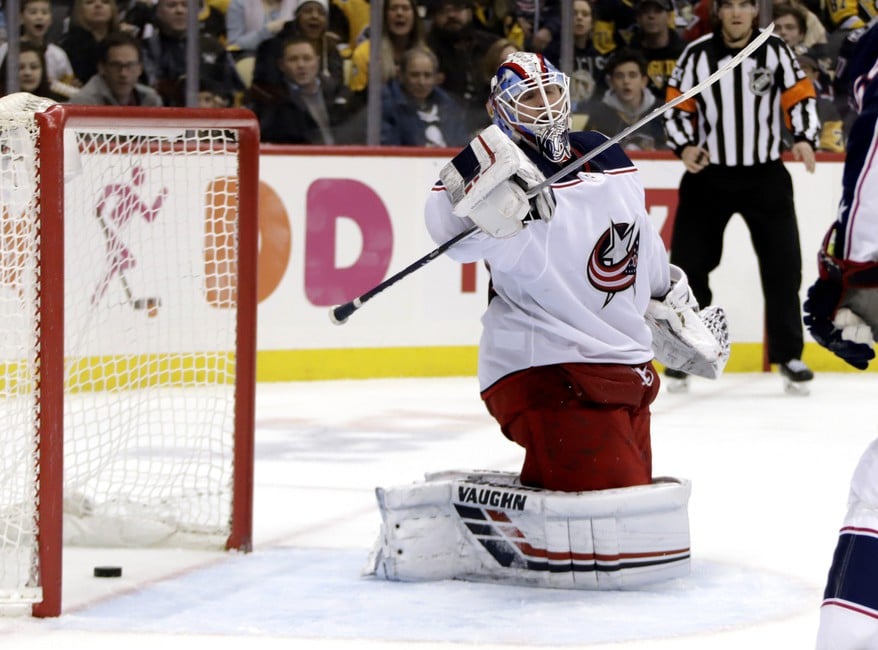 Columbus has played a lot of hockey since the sport resumed on Aug. 2. A couple of overtime games in the opening series and the 5OT marathon to start this series have put a lot of wear and tear on the Blue Jackets. It showed in Game 3, but they came out flying to start Game 4. However, by the third period, the legs weren’t moving quite as well and loose-puck battles weren’t being won.

Two-Thirds of a Good Game

The Blue Jackets looked fresh to start Game 4. Just over a minute into the game, an apparent Columbus goal by Oliver Bjorkstrand was negated after an offsides challenge by Tampa Bay coach Jon Cooper. In the first period, Columbus outshot the Lightning 11-7 and absolutely dominated the faceoff circle, winning 11 of 11. That’s right, the Blue Jackets won every faceoff in the first period.

The first shot of the second period, by the Lightning’s Barclay Goodrow, ended up in the net. Goalie Joonas Korpisalo got his blocker on the shot and appeared to knock it wide, but the puck bounced off the goal post and in. Less than four minutes later, the Lightning made the score 2-0 on a beautiful tip by Yanni Gourde. Korpisalo didn’t have a chance.

14 seconds into a 4-on-4, Cam Atkinson cut the lead in half. The goal was assisted by Pierre-Luc Dubois and Zach Werenski. Including the goal, the Blue Jackets registered eight uninterrupted shots on goal following the Gourde goal. Through two periods, Columbus led in shots (21-17) and continued to win faceoffs (22 of 32, 68.8 percent). The official blocked shots stat showed the Blue Jackets leading the Lighting 13-6.

The Blue Jackets looked a step slow in opening minutes of the third period, including their second power play. That power play lasted only 1:41, ending with Dubois headed to the box after a dangerous hit on Alex Killorn (he arrived a step or two late and received a boarding penalty). Columbus killed off the abbreviated Lightning power play, and they ended the game 3-for-3 on the penalty kill, and are 10-for-10 in the series so far.

As the third period continued, the Blue Jackets lost a lot of puck battles and a number of passes were just a hair too far ahead of the intended recipient (that sometimes can be attributed to a player skating just a bit slower than his teammate expected). A mental mistake with just over one minute left in the game sealed the Lightning win. With the goalie pulled, miscommunication led to a too-many-men penalty. Suddenly the picture changed from 6-on-5 in favor of the Blue Jackets, to 5-on-4 against.

In total number of shifts this postseason – for the entire NHL – Blue Jackets players hold 9 of the 10 top spots. That does not look like “everyone’s played the exact same amount of hockey,” – in fact, the Blue Jackets’ nine postseason games are currently more than any other team.

The only non-Blue Jacket in the top 10 is Mark Giordano of the Calgary Flames (262 shifts). He, along with teammates T.J. Brodie (251) and Rasmus Andersson (240), will play their ninth game of the postseason tomorrow and will probably creep upward on the total shifts list.

Speaking of defensemen, NHL.com staff writer Mike Zeisberger spoke by phone with Hall of Fame defenseman Scott Stevens about Jones and Lightning defenseman Victor Hedman. “It’s a showcase of two of the finest defensemen in the game,” Stevens said in a phone interview. “Both these guys are such complete defensemen, both offensively and defensively, and that’s something I hold in very high regard.”

Hedman won the James Norris Memorial Trophy as the league’s best defenseman in 2018 and is a finalist this season, for the fourth consecutive year. Jones has been in the Norris Trophy conversation for a few years, but has yet to be voted a finalist.

The Blue Jackets had a couple of lineup changes up front for Game 4. Atkinson started the game, his first appearance since being slammed into the Lightning goal by Hedman late in Game 1. Kevin Stenlund got his first taste of postseason play. Out were Emil Bemstrom (12:40 TOI in Game 3) and Devin Shore (7:12). The defensive pairs remained unchanged.

Game 5 will be Wednesday at 12 noon EST. (Isn’t that a time more typical for a pre-game skate?) That’s not even 48 hours between puck drops for the tired Blue Jackets, and it counts as a “must-win” game, as are the two that follow if the Blue Jackets are to move on to Round 2 of the 2020 Stanley Cup Playoffs.

Keep in mind that if this series does go the full seven games, Games 6 and 7 will be on consecutive days (Saturday and Sunday, times TBD). And should the Blue Jackets win this series, they can likely expect only two days off before Round 2. How different life might be if Columbus had swept the Maple Leafs in the qualifying round!

A Season To Remember: Steve Shutt’s 1976-77 Campaign
Dave Feschuk: Doc Emrick has the final word, and he’s used a lot of them in 47 years of hockey broadcasts
Top 10 Russians in the NHL Today
Monsters add Schemitsch on AHL deal
When No. 99 became the official No. 1 scorer