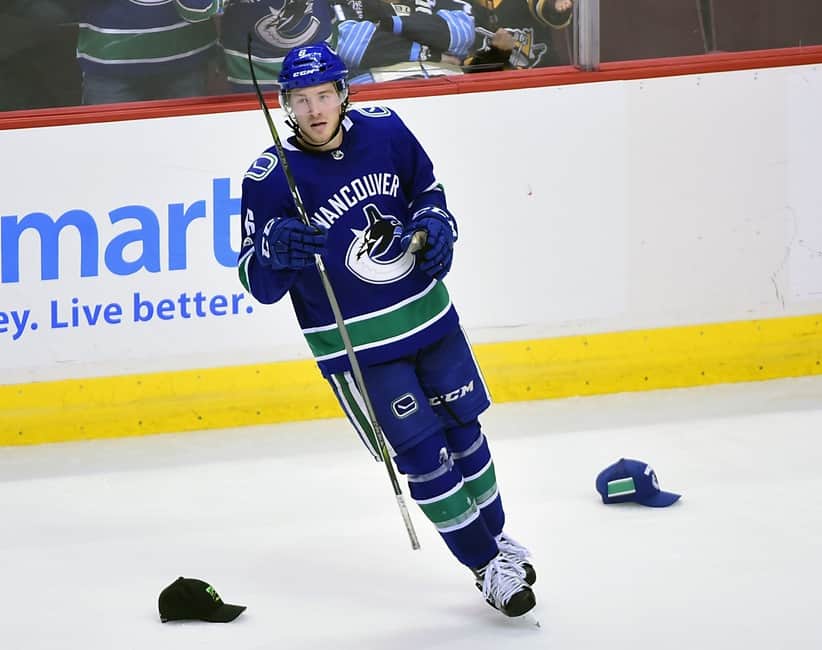 Rumors came out recently about the Vancouver Canucks front office exploring the possibility of trading Brock Boeser to clear cap space so they can re-sign Tyler Toffoli. We can all agree that trading away a young scoring winger to keep an older, less-talented forward is a remarkably bad idea. It’s even when worse when it’s being done to justify a bad trade already made. Yet, general managers manage to make bad decisions all the time. The key to being an effective general manager (GM) in the NHL is using other GM’s bad ideas for your own advantage, and Anaheim Ducks GM Bob Murray has such an opportunity here. The question is, how exactly does he do it?

How Did We Get Here?

A glance at the Canucks’ contracts shows more than a few questionable ones. Loui Eriksson is still on the books for another two seasons after 2019-20 with a $6 million cap hit. Likewise, Jay Beagle, Antoine Roussel, and their matching $3 million cap hits, have another two years in Vancouver. Beyond that, there are the contracts for Tyler Myers, J.T. Miller, Bo Horvat, and Micheal Ferland totaling $20.75 million in annual cap hits over the next three seasons. None of which account for the inevitable mega-contracts that will need to be handed out to Quinn Hughes, Elias Pettersson, and potentially Thatcher Demko, come the summer of 2021.

Needless to say, Benning’s job wasn’t going to be easy in the years to come, but decisions from his recent past have made it far harder than it needed to be. So, sure, maybe you look down the line at what Boeser’s next contract is going to look like, as well as the other deals that will need to be handed out around the same time, and decide to move on. Trading an expensive player for assets that provide a measure of cost control going forward is certainly a time-honored tradition in the salary cap era.

But salary dumping a 23-year-old goal scorer whose best years are most definitely in front of him so that you can re-sign a 28-year-old, middle-six winger whose best years are behind him is unfathomable. Combine that with having to do so because you lit $12 million in cap space on fire with contracts that were regrettable before the ink dried, and you have to start wondering how much longer you’ll have a job. For now, though, Benning is still the Canucks GM and he may be open to moving on from Boeser.

Who Could Be Involved?

Boeser is in the first year of a three-year contract that sees him making just under $18 million and an average annual of $5.875 million a year. He’s surpassed 50 points in both full seasons he’s been in the NHL, despite not playing 70 games in either one. This season, he managed to put up 45 points in 57 games, putting him on pace to eclipse the 60-point mark for the first time in his career.

Boasting solid underlying numbers (he was above 50% in Corsi for%, goals for%, and expected goals for%) Boeser is a player who can reasonably expect to provide good to great value for the remainder of his contract. He should also continue to be a productive player for the majority of the following contract, given that he turns 25 in February 2022. All of this is to say, that acquiring a young, productive player like Boeser wouldn’t be cheap. Enter one Rickard Rakell.

Rakell turned 27 this May, and he has two years remaining on what was at one point one of the best value contracts in the NHL. At just under $3.8 million, and having hit the 30-goal mark twice, he is a win-now player with an incredibly team-friendly contract. Although he can play all three forward spots, he has found the most success on the wing.

Related: Pavel Bure – A Tribute to the Russian Rocket

While he has struggled to produce, failing to hit either 20 goals or 50 points in each of the last two seasons, he has been far from the only Duck to underperform in that same stretch. Despite less than stellar totals, the sweet-shooting Swede still finished in the Ducks’ top three in goals, assists, points, and power-play points in both seasons. He may not have been the sole solution to what ailed Anaheim, but he also wasn’t the problem. The question then becomes, does a Boeser for Rakell swap make a reasonable basis for a trade?

The case for Anaheim is simple enough. You’re trading away a 27-year-old winger in return for a 23-year-old one. Sure you have to take on an additional $2 million in cap hit, but you are getting a player who is much more in sync with your franchise timeline than the one you are losing. Plus, with two years left on his deal, you essentially have a season and a half trial period to see if Boeser is worth extending. If so, you get to negotiating and you figure it out. If not, then you can trade him at the 2022 trade deadline and more than likely recoup a first-round pick.

Trevor Zegras is a young, pass-first center with a ton of potential. Any chance Anaheim has at regaining their status as a legitimate contender is largely tied to his ability to reach his ceiling. Bringing on a young, proven goal scorer like Boeser to pair with him could go a long way towards helping him get there. Zegras is inarguably the best center prospect the Ducks have drafted since Ryan Getzlaf.

If Anaheim were to acquire Boeser, he would be the best winger they have had since Corey Perry. Combining Zegras, Boeser, and another top-10 pick in this year’s draft with the Ducks’ solid, though not exceptional, existing prospect pool and you can start to see the path back to contention for Anaheim.

The other point to consider here is that Rakell alone isn’t getting this deal done. It will almost certainly cost you the Boston Bruins pick and a decent prospect as well. While it might hurt to lose a prospect like Max Jones, Isaac Lundestrom, or Benoit-Olivier Groulx, the fact remains that Boeser is a better player right now than any of those three project to be. In all honesty, as long as the ask doesn’t involve one of Sam Steel, Troy Terry, or a future first-round pick, the Ducks should be willing to meet almost any price Vancouver wants.

Why Vancouver Says No

Vancouver on the other hand will almost certainly have a much harder time justifying any trade involving Boeser, but that fact is inevitable when you’re the one losing the best player in the trade. Sure, Rakell is two years older than Boeser, but he’s already proven he can hit 30 goals, and he costs less than Boeser to boot. Plus, given that they have equal term remaining on their contracts, you aren’t tying up any cap space long term, which should make the summer of 2021 a little easier to navigate.

It’s redundant but worth repeating; you are going to pay Hughes and Pettersson no matter what, and you’re going to pay them a lot. Pettersson is a foundational talent up front, capable of making everyone around him better. Scoring 132 points in 139 games is a heck of a feat for anyone, let alone a 21-year-old kid who’s still playing on his entry-level contract. Hughes is a Calder Trophy finalist who finished fourth among defensemen in points this season.

He also happens to already be the best defenseman on his team despite not being all that great at defense yet. These kinds of players don’t come around very often. Vancouver is going to pay them, and they’re going to pay them big.

So while an extra $2 million in cap space may not seem all that significant, when you combine it with Jordie Benn ($2 million), Alex Edler ($6 million), Brandon Sutter ($4.375 million), Sven Baertschi ($3.366 million ), and Tanner Pearson ($3.75 million) — who all come off the books that summer — you have a little over $19 million in available cap space.

Add in Ryan Spooner’s buyout coming off as well, and suddenly you’re north of $20 million in space. The Hockey Writers‘ own Sartaaj Bhullar has speculated that matching $10.5 million contracts for Pettersson and Hughes, a la Patrick Kane and Jonathan Toews, might get it done. If so, that puts Vancouver a small trade away from opening up the necessary room to get those deals done. Well, almost.

The rub is that the whole reason for exploring a Boeser trade to begin with was re-signing Toffoli. Now, given that the league has been forced to take certain precautions, such as instituting a flat cap and separating it from hockey-related revenue, maybe Toffoli’s extension doesn’t break the bank. But it’s still going to be north of $5 million a year, and then there is the question of keeping Edler. Suddenly, that $20 million is looking closer to $12 million — $14 million if you’re lucky.

And while I’m no mathematician, I feel pretty confident saying that $14.5 million doesn’t equal $21 million. All of this is to say that Vancouver would be trading one of their best assets to solve a problem that doesn’t exist while creating a new, separate, and far more significant problem in the process. Or as PuckSoup’s Ryan Lambert put it:

So while Ducks GM Murray may be sitting at home, hoping beyond hope that he gets a call from Benning asking him to take Boeser off his hands, he shouldn’t be planning his summer around it. However, that doesn’t mean there isn’t an opportunity to leverage both the Boeser issue and Benning’s previous contracts against him. The Athletic’s Corey Pronman had Vancouver’s prospect pool ranked fifth best at the beginning of the season (from “Pronman: 2019-20 NHL farm system rankings”, The AthleticNHL – 9/5/19).

That same article had Anaheim at 14th, which isn’t particularly great, but isn’t terrible when you consider the sustained regular-season success the Ducks have had over the last decade or so. Plus whenever the NHL gets around to having a 2020 Entry Draft, Murray will have the sixth-overall pick. The last time the Ducks selected sixth overall was 2012 when they took Hampus Lindholm, which has worked out quite well. The aforementioned Zegras was taken with the ninth pick in last year’s draft, and by January 2020 had moved to the top of Pronman’s prospect rankings (from “Corey Pronman: Midseason NHL Prospect Rankings”, The AthleticNHL, 1/15/20).

Matt Larkin of The Hockey News noted the dearth of scoring talent and blue-chip defensive prospects as major areas of concern in his postmortem on this season’s Ducks. The top of the 2020 Draft has enough talent that Anaheim should have a better-than-good chance at a player who addresses one of those concerns. If Murray, and more importantly the Samuelis, are willing to take on one or more of Roussel, Eriksson, Baertschi, and Beagle, Vancouver has the prospects to make it worth it.

Players like Jett Woo, Nils Hoglander, or even Vasili Podkolzin could help start providing potential solutions to Anaheim’s pipeline problems. Vancouver also has all 14 of their picks in the next two rounds, although keeping Toffoli would cost them their 2022 fourth-rounder. It’s also worth noting that each one of those players could be far more attractive at a lower cap hit. If Anaheim was willing to retain salary, they could get additional picks and/or prospects for those same players down the line.

Start adding up all those future assets and suddenly you can start to see light at the end of the tunnel. The odds of them getting Boeser are slim to none, but if Murray and his staff decide to get creative, they could turn that fact into a positive.