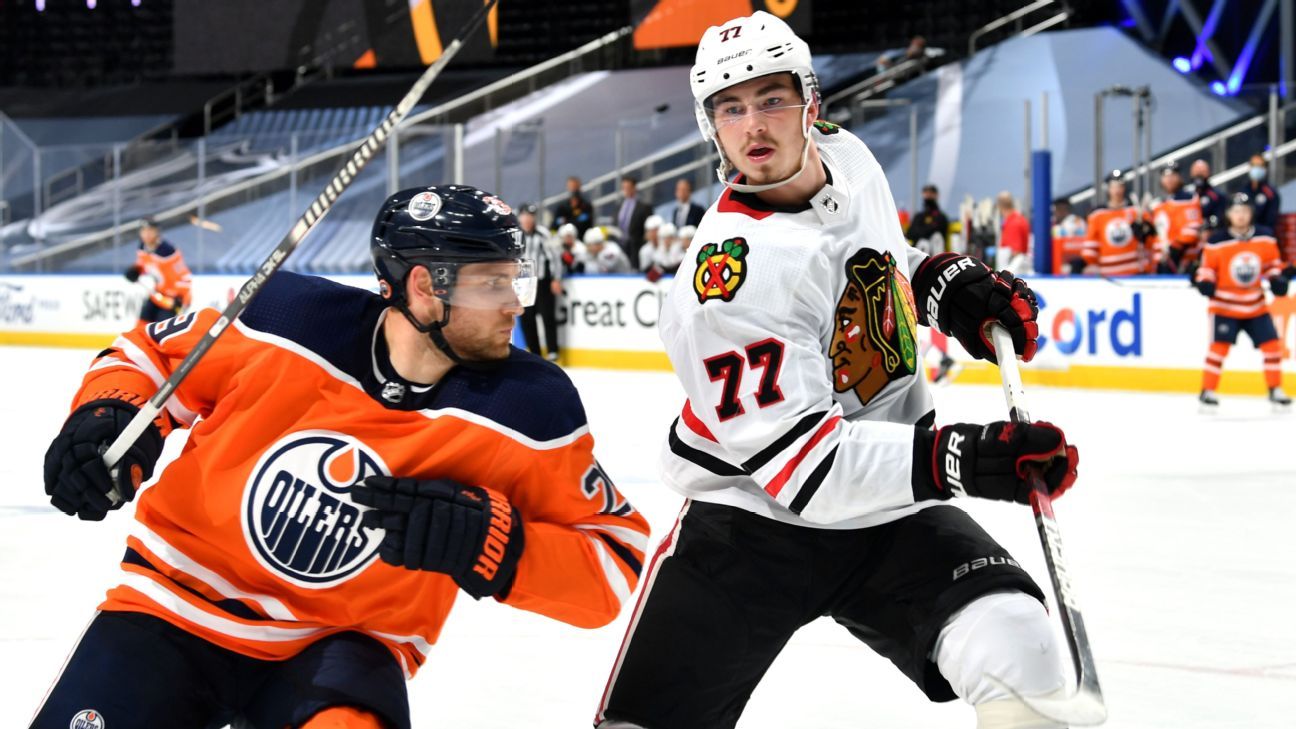 When it became clear that Kirby Dach, the No. 3 pick of the 2019 NHL draft, was going to make the Chicago Blackhawks‘ roster this season, the 19-year-old wanted to make the most of the opportunity.

Sure, Dach was viewed as the long-term heir apparent to Jonathan Toews at center, but he also was getting the chance to play with Toews, as well as Duncan Keith, Patrick Kane and Brent Seabrook, respected veterans who knew what it took to win a Stanley Cup (or three). Dach asked Seabrook if he could move in with his family for the season. Seabrook agreed, offering Dach his basement and rides to the rink — as long as the teenager did his own laundry. “It was great for me to live with him to see how a real professional handles his business, and how he is around his family, what type of person he is to people on the street,” Dach says. “One of the biggest things I learned, I always had a hard time leaving a game at the rink. What he really helped me with is just getting ready for each day.”

Throughout the season, Dach took mental notes on Keith’s preparations — especially the way the 37-year-old prioritized recovery — as well as Toews’ leadership skills. Then, when the NHL season was paused due to the coronavirus in March, Dach asked a favor of Kane: Can I have the name of your trainer?

Stay up to date with scores, schedule, team updates and much more.

Dach, who is listed by the Blackhawks as 6-foot-4 and under 200 pounds, still needed to add strength to become a more effective NHL player. A year ago, when he was in juniors, he probably would have lifted heavy weights and bulked up that way. Instead, Dach was inspired by how Kane seemed to be getting more productive with age. Kane introduced Dach to Chicago-based trainer Ian Mack, whose workouts are typically body-movement based, and focus on mobility and muscle elasticity.

Dach stayed in Chicago for a week after the season was paused to get to know Mack, then the two worked virtually when Dach returned home to Alberta.

“Ian is really different, he’s got a unique way of doing things,” Dach said. “My body feels super strong. I was able to add a little weight and change my lower body. I want to add weight, but add it properly — I want to keep my speed and play the way I play right now, and not restrict my body by lifting heavy weights or doing things that would hurt my body in years to come.”

Over the course of this strange, prolonged season, Dach matured, became more confident, and is ready to contribute to the Blackhawks now — and inherit the role of a face of the franchise in the future.

As Kane puts it: “He has all the potential in the world. I think he can be a top player in the league. … He can be as good as he wants, you know?”

Chicago is tied, 1-1, in its qualification round series with the Edmonton Oilers, with a pivotal Game 3 on Wednesday. Although the series is billed as the new wave of stars (Edmonton’s Connor McDavid and Leon Draisaitl) versus the old guard (Chicago’s Kane, Toews, Keith, and Corey Crawford as the core that dominated over the last decade), Chicago actually has the youngest roster by average age (25.6) of any team in the tournament. Dach’s landlord, 35-year-old Seabrook, stayed home as he continues to recover from three major surgeries, which did bring down the average. Even so, it’s a testament to GM Stan Bowman retooling on the fly.

Dach — who turned 19 in January — leads the next generation, which also includes Adam Boqvist (19), Alex Nylander (22), Alex DeBrincat (22), Dylan Strome (23) and Dominik Kubalik (24), as well as defenseman Ian Mitchell (21) who will likely join the team next season. Through the first two games of the series against the Oilers, Dach has three points (all assists), but most significantly, trails only Kane in ice time among Blackhawks forwards as coach Jeremy Colliton gives the rookie increased responsibility, including on the penalty kill.

Dach’s ascent even impresses his teammates. “He’s on the fast track, no doubt,” Toews said. “I think you saw him play his first couple NHL games, and to me, he was an entirely different player when things wrapped up in March. He was just getting more and more confidence. It’s tough for a kid like that, who was a top player for his team in juniors, to go to a third-line role where he’s not getting a lot of power play or offensive roles. As the season went along, he was getting more physical, hanging on to pucks. He’s so big and strong and fast and skilled that when he puts his mind to it, there’s nothing he can’t do.”

The Blackhawks lucked into the third lottery spot in 2019 and selected Dach last June; a little over 13 months later, he’s playing in a postseason NHL series. “It’s sometimes so crazy to think about how much my world has changed over the last year,” Dach said.

It’s especially crazy because the teenager was hardly a lock to make the roster. Dach played for the WHL’s Saskatoon Blades last season, and due to a CHL agreement, he was not eligible to play in the AHL full-time in 2019-20. So either the Blackhawks kept him around, or they would have to send him back to juniors.

“I think when you look at Kirby you have to remember he was 18 when he came into the league,” Seabrook said. “He was drafted, the Blackhawks did their thing with him, the whole red carpet thing, then we had a camp, he left Chicago and he went to World Junior Camp for three weeks, went home for a week, saw his buddies, and he was all excited — he probably had a party or two.”

Then it was off to the Blackhawks’ annual prospect tournament in Traverse City, Michigan, where Dach sustained a concussion after he was shoved into the boards by Darian Pilon, who was trying out as a Minnesota Wild prospect. Dach wasn’t cleared for training camp.

“You hear about it more in the NFL and other sports, but when you miss camp it’s pretty tough,” Seabrook said. “Especially for an 18-year-old kid that’s trying to find his way.”

But despite missing camp, Dach debuted for the Blackhawks on Oct. 20 in a game against the Washington Capitals. “My ‘welcome to the NHL’ moment came in my first shift,” Dach said. “I got in the starting lineup and I see Nicklas Backstrom across from me, Alex Ovechkin on my right side and T.J. Oshie on my left side, and it was like, ‘wow, this is real.'”

He scored his first NHL goal in his second game, against the Vegas Golden Knights, and one month later, Bowman decided Dach should stick around for the season. “The thought process for us was to understand that his game was going to grow,” Bowman said. “And not try to evaluate his game in November. We felt that he was able to take a step, we had to be patient with him.”

Dach adjusted to the NHL’s speed and physicality. His biggest takeaway over the first few months was how strong players were along the boards, and how tough it was to battle for pucks in the corners. “As a young guy, especially in juniors with my size, I was able to get away with cheating sometimes for offense,” Dach said. “In the NHL, you hear it all the time, it’s a second-, third-, fourth-effort league. That adjustment period for me to be stronger on my stick and to make harder plays took a while, but once I got used to it, I felt good out there.”

During the pause, Dach worked specifically with Mack on his stability, as well as building a stronger core. One area he needs to improve on is faceoffs. He won just 33.8% of his 222 faceoffs during the season, and is at just 20% in the series against the Oilers.

The off-ice adjustment has been easier — in part because of his living arrangement. “Obviously living with Seabs helped me out getting used to the older guys,” Dach said. “But [the veterans] are just so nice and accommodating to us young guys, kind of treat us like we’ve been there for 10 years.”

There are certain ways Dach wants to make his own stamp, including off the ice. Dach said he was excited about the NHL’s laxed dress code during the playoffs. As a team, the Blackhawks decided to wear business casual to games, but Dach said he can show off his individuality on off days. “It’s going to be a lot of fun to see what guys are wearing,” he said. “A lot of the young guys, me, Nylander and Boqvist were on the phone with each other trying to figure out what we want to bring.”

Dach said he didn’t make any extravagant splurge purchases during his first professional season, but did save up to buy a car — so he won’t have to bum rides anymore. He also plans to move out from the Seabrooks’ house next season. Even though he’ll be a seasoned pro by then, he won’t soon forget his rookie season.

“I’ve enjoyed every step along the way,” Dach said. “I made a lot of new friendships and bonds that will last a lifetime, and I’ve started to really come into my own and be my own player. Hopefully I can carry that on.”