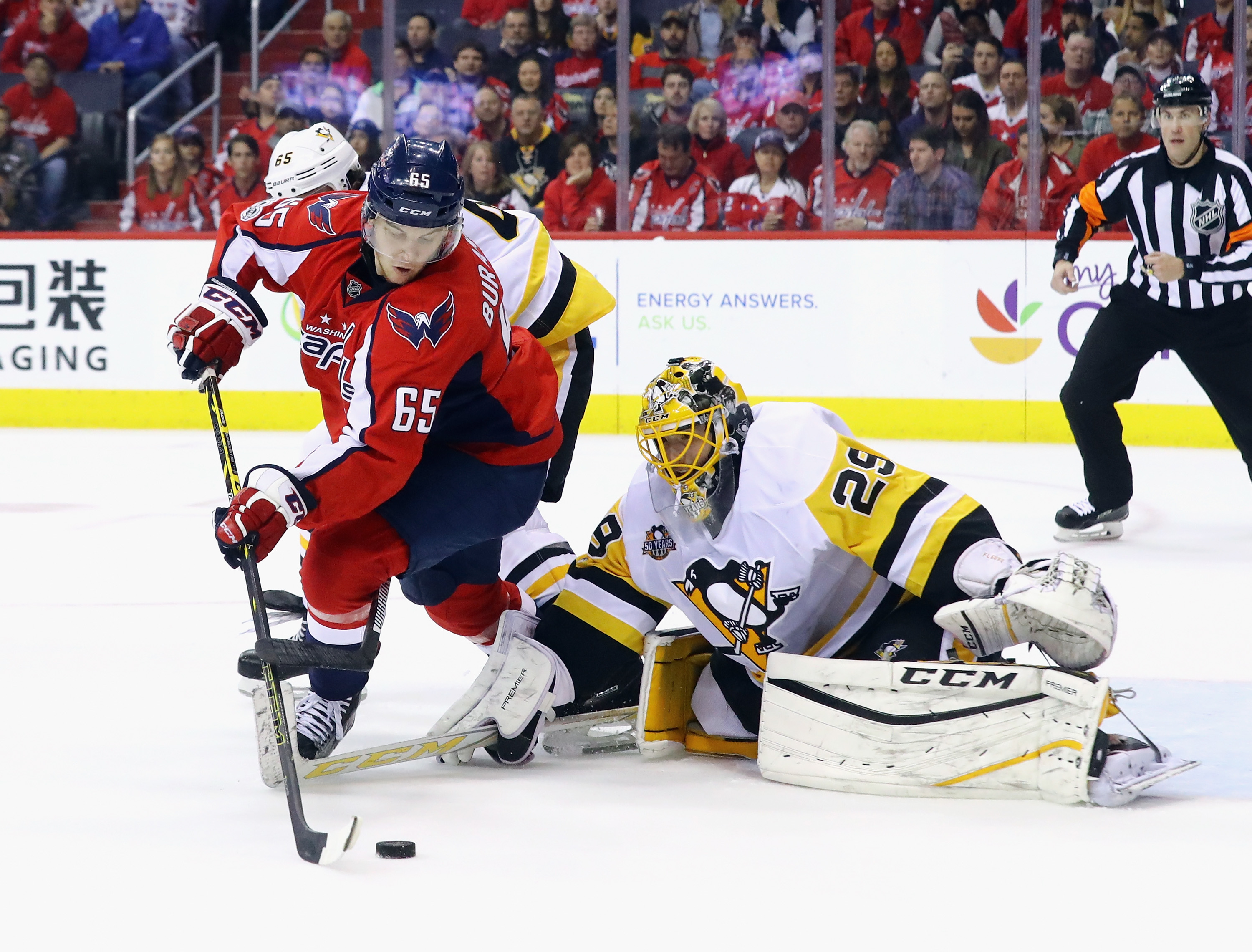 Ever since Alexander Ovechkin joined the Washington Capitals’ lineup for the start of the 2005-06 season, he has been the face of the franchise. He has become a perennial 50-goal scorer and one of if not the most popular player in the NHL. With a resume like the one that Ovechkin has assembled, it goes without saying that he casts a CN Tower-sized shadow over everyone else who finds their way into Washington’s lineup (that’s a little Ontario shout out for my fellow Ontarian Caps fans).

With Ovechkin’s shadow looming so large, it is easy for players of value to slide under the radar when they aren’t putting up 50-goal, point-per-game seasons. In fact, there have been quite a few Capitals that went under-appreciated and underrated since Ovechkin entered the league that deserve their chance in the spotlight.

To be clear, when I say underrated, I don’t mean someone like Nicklas Backstrom. Yes, Backstrom has been historically underrated, but he is underrated in the sense that he is a world-class player who doesn’t get as much recognition as he deserves. The players I am discussing may not have put up the most points, but had a unique skill set or provided something to the roster that had certain underrated value.

This list is in no particular order and 100% in my opinion. I am not the be-all and end-all of hockey player knowledge, or even Capitals’ player knowledge. This is just my personal opinion of Capitals who were sitting on the outskirts of the spotlight during their time in D.C.

I will begin with some honourable mentions.

One honourable mention has to be Joel Ward. “Wardo” was a valuable depth piece to the Capitals’ lineup and scored some big goals, including the series-winning overtime goal in Game 7 of Round 1 against the defending Stanley Cup champion Boston Bruins in 2012. I didn’t include him because I think enough people recognize how valuable he was in a depth role during his playing days.

Another honourable mention goes to defenseman, Nate Schmidt. Schmidt had a short tenure with the Capitals, but was an incredibly solid d-man. He was solid enough that the Vegas Golden Knights chose him over projected pick, goaltender Philipp Grubauer, in their expansion draft. I didn’t add Schmidt to the list because he has blossomed into a top-two defender in Vegas and everyone knows how good he is now.

With those out of the way, let’s get into the three underrated Capitals from the Ovechkin Era in D.C.

Marcus Johansson was selected 24th overall by the Capitals in the 2009 NHL Entry Draft. He would go on to play 501 games for the guys in red, notching 102 goals and 188 assists for 290 regular season points. Although these numbers do not jump out at you, well, that is the point. “Mojo,” as he was commonly referred to, was an extremely skilled player whose playing style would be most comparable to Nicklas Backstrom, which is a hell of a compliment.

For the Capitals, he was a patient player who excelled in the offensive zone with the puck. He could cycle the puck with the best of them and was unique because he could play anywhere from the third line to the second line and wouldn’t look out of place. He had the vision of an elite playmaker and the patience of a well-trained dog.

Johansson’s biggest moment as a Capital came when he scored the series-winner in overtime of Game 6 in Washington’s 2017 first-round matchup against the Toronto Maple Leafs. This series was too close for comfort for a lot of Capitals fans, so Johansson relieved a ton of stress when he buried that goal.

An area of expertise for Johansson was power-play zone entries, something the Capitals have faltered with since his departure back in 2017. To me, he was just always a prototypical Capital. The way he skated and played just made me think of what type of players Washington liked to draft, and he is a player I missed the second they dealt him. He was a fairly consistent 45-point guy who I always felt had potential to be a regular 60-point guy.

I have been speaking in the past tense because he is no longer a Capital, but Johansson is still playing (just not in the postseason) with the Buffalo Sabres. He was a very successful rental for the Boston Bruins last season when they lost in the Stanley Cup Final to the St. Louis Blues, but signed with the Sabres in the offseason. I can only imagine he is still utilizing all these tools, however he has battled injuries over the last few seasons.

The Capitals grabbed Chandler Stephenson as the 77th-overall selection in the 2012 NHL Entry Draft. As a Capital, he amassed 14 goals and 19 assists for 33 points in 168 games. I’ll be the first to admit, if Johansson’s numbers weren’t incredible, I don’t even know how to describe Stephenson’s. However, I feel Stephenson was never appreciated for the other skills he brought to the table.

Aside from having the wildest name on the Capitals until they added Garnet Hathaway this past offseason, Stephenson was someone who played a third or fourth-line role but looked more like he was a second liner. This is thanks to his preposterous speed. When he got going for the Capitals, Stephenson could negate almost any icing and win races for any pucks. Not to mention, he was just about guaranteed a breakaway at least every other game.

This speed of his also made him the exact player you want on your penalty kill, which is where Stephenson made a lot of his money. He was defensively capable and responsible, which allowed for him to be a big part of Washington’s 2018 Stanley Cup victory. His responsible playing style allowed him to move up and down the lineup where he was needed if there were injuries to top-six players. He was sort of a more skilled Carl Hagelin before the Capitals acquired Hagelin.

The one thing I always felt was missing from Stephenson’s game was improved offense. When he had the puck in the offensive zone, he was able to keep it away from his opponent and carry it around the zone before making a decent pass. His issue was that he rarely ever tried to generate offense. In 2018-19, his last season with the Capitals, he took 36 total shots. This was good enough for 17th-least shots by a forward with 30-plus games played. Of those 17, he played the most with 64 games played.

I feel he would have benefitted from some one-on-one coaching to build his confidence. If he were coached a little more directly about when to shoot, how to get better shots off, etc., he could have been a dangerous option for the Capitals. Still, his blistering speed, defensive style of play and ability to carry the puck make me wonder what could have been if his game were more fine-tuned in D.C.

Stephenson was shipped off to the Vegas Golden Knights in exchange for a fifth-round draft pick in 2021 on Dec. 2, 2019.

Andre Burakovsky was drafted 23rd overall by the Capitals back in 2013. In his five seasons in Washington, he managed 62 goals and 83 assists for 145 points in 328 games played. Those aren’t bad numbers. This one is tough because we all know that Burakovsky is a good player. It just seemed like he never found his footing in D.C. However, he was still a really good player who, in my opinion, deserved more recognition for the things he could do right, as opposed to what he wasn’t doing enough of.

What Burakovsky was able to do right revolved around his puck control and vision. His handles with the puck made it clear he was a first-round pick. When he carried the puck into the offensive zone he could get around just about anybody before making a crisp pass to an open player. He also had arguably one of the best and hardest shots on the Capitals during his five-season tenure.

He was also beloved during his time in D.C. by both his teammates and fans. It was well-known amongst fans that Burakovsky and Tom Wilson were best friends and roommates for a long time. It was also well-documented that Burakovsky was great friends with John Carlson and his family. Carlson’s wife, Gina, still frequently comments on Burakovsky’s Instagram pictures about how much her sons miss him.

Burakovsky’s biggest moments as a Capital came during the 2018 Stanley Cup run. He scored goals two and three in their 4-0, Game 7 win over the Tampa Bay Lightning in the Eastern Conference Final after being injured and scratched earlier in the postseason. He then went on to get the secondary assist on Lars Eller’s Stanley-Cup-winning goal in Game 5 against the Vegas Golden Knights.

He also gave one of the most unappreciated passes of any postseason goal on Eller’s Game 2 Stanley Cup Final goal against the Golden Knights.

Burakovsky’s issues came from his lack of confidence that resulted in him seeing a sports psychologist to try to help battle. One of his other main issues was his accuracy. Maybe it was just me, but I had never seen a player with a more dangerous shot miss the net as often as Burakovsky did. I have no stats to back this up other than my eye test, but whenever he wound up a rocket of a wrist shot, he went high and wide with it.

However, like Johansson, Burakovsky, to me, was a prototypical Capitals’ forward who I really enjoyed and wish more people did, too. He always felt like he belonged in the top six, but it wasn’t going to happen in Washington.

He was traded to the Colorado Avalanche on June 28, 2019 for Steve Kosmachuk, and a second and third-round pick in the 2020 NHL Draft.

Gone, But Not Forgotten

These players all provided something to the lineup that, as a Capitals fan, I enjoyed watching and felt made the team better. Although the Capitals have been able to play fine without them (winning a Cup without Johansson), I still believe that these guys were big parts of the team who deserved more praise than they got.

Hopefully for them, and their careers, they have all moved onto places where they may step out of the shadows and succeed in a role where the spotlight can be shared a little more than it can be in D.C.

Dave Feschuk: Doc Emrick has the final word, and he’s used a lot of them in 47 years of hockey broadcasts
After positive reviews on Thornton, Leafs’ Marner excited for new-look team
Sabres Snagging Hall is No Laughing Matter
Maple Leafs News & Rumors: Why Dubas Signed Experience in Offseason
A Season To Remember: Steve Shutt’s 1976-77 Campaign