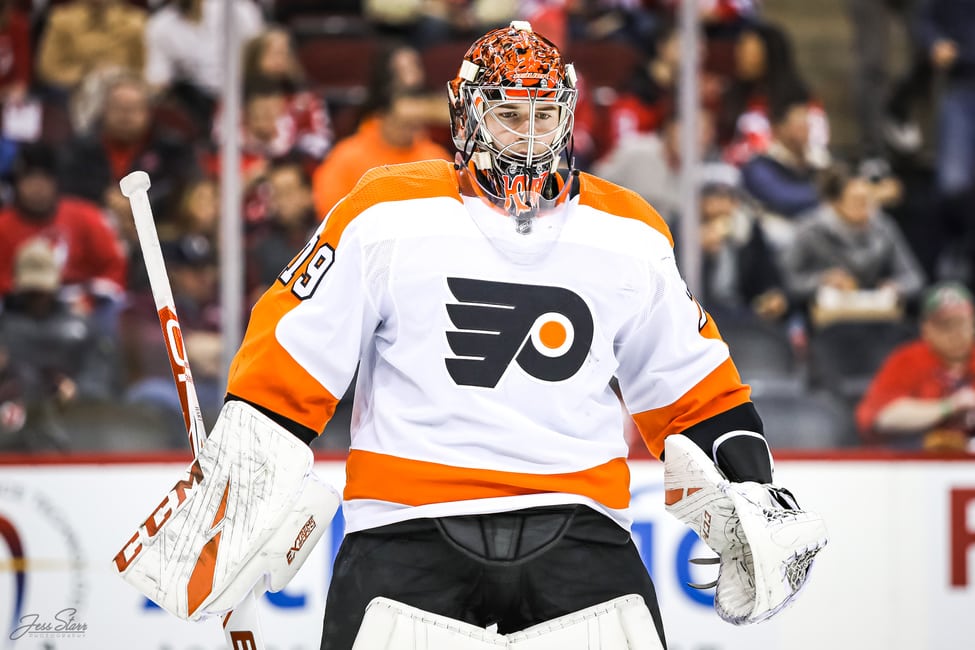 Carter Hart stared down his first NHL postseason game on Sunday and rose to the occasion, leading the Philadelphia Flyers to a 4-1 victory over the Boston Bruins in their first game of the Stanley Cup Playoff round-robin tournament.

In the first meaningful game for either team in nearly five months, the Flyers’ chances hinged on Hart’s performance and they needed every bit of his excellent play in the first period to avoid falling into a big hole.

Philadelphia’s first couple of shifts were solid, but then it was all Bruins for the next 10 minutes. Boston outshot the Orange and Black 12-6 in the opening 20, and eight of those shots were in the first half of the period. Hart made two massive stops and tightly controlled rebounds, tracking and swallowing up pucks well.

You wouldn’t have guessed it was Hart’s postseason debut from how calm and composed he was, and he bought his teammates time to find their legs and start creating pressure on the attack. Some credit also goes to the Flyers’ defenders for keeping the puck out with early shot blocks, particularly the youthful second pair of Travis Sanheim and Philippe Myers.

Sanheim helped his team get on the board early in the second, feeding a nimble pass into the slot for Michael Raffl, who roofed a backhander over Bruins goalie Jaroslav Halak. Myers, another playoff first-timer, got on the scoresheet late in the period with a gorgeous top corner snipe just eight seconds after Boston solved Hart for the only time. Any coach will tell you it’s a cardinal sin to allow a goal right after you’ve scored, and Myers made sure the B’s didn’t gain any momentum from Chris Wagner’s tally.

Hart wasn’t tested as much for most of the middle frame as his teammates found their mojo on offense, but made several stellar saves when called upon. On the one goal, Wagner stuffed the puck around Hart off a pass from the corner. The goalie stopped 35 other shots.

However, Boston made a concerted push in the third to get back in the game after falling behind 4-1 – Nate Thompson and Scott Laughton had the Flyers’ other goals – and Hart stopped all 15 shots fired his way. It was a textbook performance from the young tender. He always squared up to the shooter, consistently minimized extra movement and rarely allowed the Bruins’ talented forward corps to get a second opportunity.

Hart became the youngest Flyers goalie ever to win a postseason game, and Thompson later said he’s reminiscent of Carey Price. “He’s a true pro. He reminds me a little bit of a goalie I used to play with in Montreal and you guys know who I’m talking about. He’s our backbone back there,” Thompson said.

Although this game wasn’t part of a series and thus wasn’t as critical as most of the weekend games, it was the No. 4 seed in the Eastern Conference resoundingly beating the No. 1 seed. That’s good not only for confidence, but might be enough on its own to secure a top-three spot for Philadelphia and an easier path in the first round.

Flyers head coach Alain Vigneault said last week that Brian Elliott will get the start against either the Tampa Bay Lightning or Washington Capitals, since the three round-robin games are seven days apart. But it’s clear this team will go as far as Hart takes them, and the young phenom earned an A-plus in his first test.

Isn’t it refreshing to be talking about Philadelphia’s goaltending as a strength, after the gong show of last season and a revolving door of mediocre puck-stoppers over the past two decades?

If Hart stays hot and depth players continue to contribute like they did Sunday, it’s conceivable that the Flyers could run the table in the round-robin and head into the real playoffs as the top seed in the East. Either way, they’re in good hands with stellar youngsters in net and on the back end.