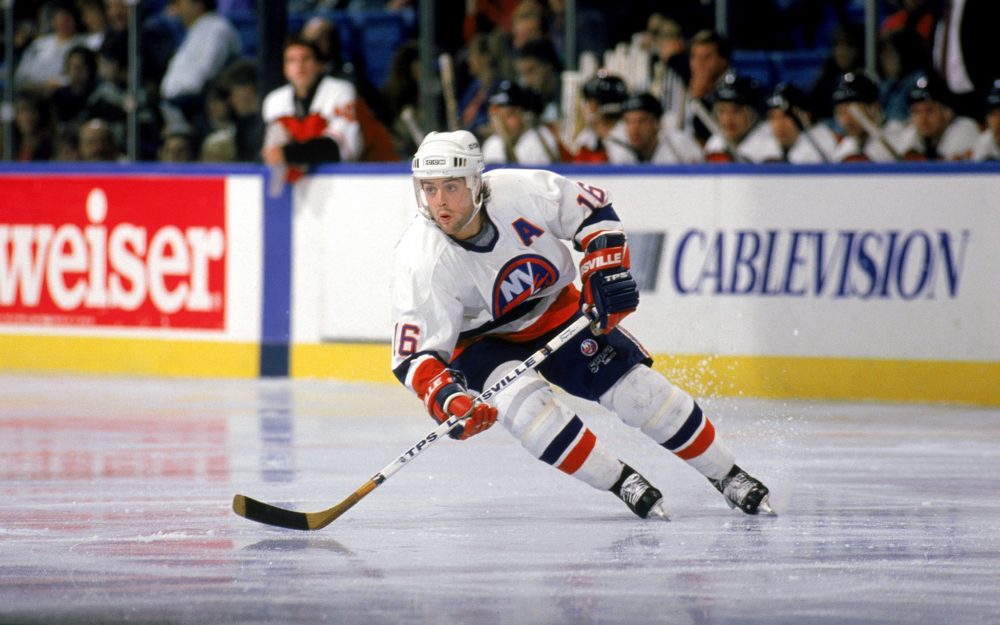 Despite the ups and downs, the New York Islanders have had some memorable goals since their inception in 1972. From incredible comebacks to Stanley Cup-clinching performances, this franchise has provided its fans with plenty of memories from some of its most electrifying players. Here, we’ll cover five of the most iconic and important goals in Islanders’ history.

By the spring of 1987, the dynasty years were waning. After four straight Stanley Cups and 19-straight playoff series wins, the Islanders weren’t able to make it out of the second round two seasons in a row, including a first-round exit in 1985-86. Following that season, long-time Islanders’ coach Al Arbour stepped down to take on the role of Vice President of Player Development marking one of many changes to the Islanders during the late 1980s.

With Terry Simpson now behind the bench for his first season as an NHL head coach, the Islanders went into the 1986-87 playoffs hoping to regain their former glory. Though Bryan Trottier and Mike Bossy were still leading the team in scoring by the late 1980s, a new player began to emerge following their 1983-84 Stanley Cup run: Pat LaFontaine.

Coming off of his first 30-goal season, LaFontaine was making a name for himself as a scorer in the NHL during the 1986-87 season. That season, he scored 38 goals, tying Bossy for the team lead. This turned out to be Bossy’s last season, making this memorable goal a sort passing of the torch to the next generation of Islanders.

The Islanders fell down three games to one in their first-round series against the Washington Capitals in April 1987. But, they managed to crawl their way back, as they historically did, forcing a Game 7 – and then some.

The game began on Saturday, April 18 at Capital Center. A back and forth match was sent into overtime with just over five minutes remaining in the third period when Trottier scored. One overtime turned into two, then three, and four. The time kept ticking until early the next morning. Players on both teams skated around with their sticks on their shinpads, holding themselves up with every bit of energy that had left. Someone had to be the hero, but who?

The magical moment game at 1:58 am on Easter Sunday when LaFontaine finally solved Capitals goalie Bob Mason at 8:47 of the fourth overtime. That goal completed the Islanders’ comeback and propelled them to a second-round matchup with the Flyers.

The Islanders were a young franchise in 1975, but in their third season, they found themselves matched up in the first round against the New York Rangers. Though many point to the Islanders’ second-round comeback against the Pittsburgh Penguins as more exciting, which is fair, that first-round victory against the Rangers helped set in motion one of the greatest runs in sports history. That season marked the first of 14 straight playoff appearances for the Islanders all sparked by one goal.

With the series tied, the Rangers evened the score late in the third period of Game 3 to force overtime. In what the great Stan Fishler called “a symbolic moment in New York sports history,” the line of Ed Westfall, J.P. Parise, and Jude Drouin were the magic makers on April 11, 1975. Parise netted the winner just 11 seconds into overtime after he slipped behind Rangers’ defenseman Brad Park accepting a pass from linemate Drouin.

For fans of a certain age, Jim Robson’s voice is a thing of beauty. Robson, a Canadian broadcaster for the CBC, called two Islanders’ Stanley Cup Final series, including their first victory in 1980. His call of the Cup-clinching goal remains an important memory for Islander fans.

After a Game 5 loss in Philadelphia, the Islanders still held a three to two lead in the series. Game 6 was back on Long Island in front of a capacity crowd at the Nassau Coliseum. After two periods, the Islanders were up 4-2 over the Flyers. Billy Smith, who allowed six goals in Game 5, continued to be bailed out by his defenseman all game long, but during the third period, the Flyers broke through twice, forcing overtime.

After the midway point of overtime, Arbour sent out the line of Lorne Henning, Bobby Nystrom, and John Tonelli. Henning, who had been on the Islanders since their inception in 1972, scooped the puck up in the neutral zone along the right-wing boards and hooked a pass back through the center faceoff dot to Tonelli.

Tonelli and Nystrom, who often practiced two-on-twos, crisscrossed just ahead of the Flyers blue line. Nystrom, also part of the Islanders’ inaugural team, sneaked behind the Flyers defense and Tonelli slid the puck towards the middle of the ice. The pass perfectly deflected off of Nystrom’s stick from the slot and into the net, clinching the Islanders’ first of four Stanley Cups.

The 23-Year Wait is Over

However you feel about John Tavares, you can’t help but smile when you think back to his overtime goal during the first round of the 2016 Stanley Cup Playoffs against the Florida Panthers. Not only did this propel the Islanders to the second round, but it ended a 23-year drought for the Islanders who hadn’t made it out of the first round since 1993. For a franchise beaten down for over two decades, this goal helped a generation of Islander fans have hope for the future and got a huge monkey off its back in the process.

Tavares received a pass off of the right-wing boards from Kyle Okposo just over the Florida Panthers blue line. He took a few strides and let a hard, low shot go towards Panthers’ goalie, and former Islanders draft pick, Roberto Luongo. A pad stop produced a rebound that Tavares quickly corralled. On his backhand, he swung behind the net and snuck the puck in just before Luongo could dive over to the far post. The wait was finally over.

For Islander fans that weren’t old enough to remember The Easter Epic and only heard of the dynasty years from their parents or watched videos on YouTube, the Shawn Bates penalty shot in Game 4 of the 2002 Eastern Conference Quarterfinals against the Toronto Maple Leafs at Nassau Coliseum may have been your first positive memory of this team.

Following the 1993 playoff run, the Islanders were, in a word – bad. Ownership and management issues torpedoed this team to the bottom of the NHL, making it a laughing stock of the league for the better part of a decade. However, a massive turnaround during the 2001-02 season led by Alexi Yashin and first-year head coach Peter Laviolette brought the Islanders into a first-round matchup with the Toronto Maple Leafs.

The Bates penalty shot took place with 2:30 remaining in the third period of a tie game. Bates came screaming down the left-wing after receiving a pass from Yashin. Maple Leafs’ defenseman Bryan McCabe couldn’t catch up and, as he fell, he swung his stick in an attempt to steal the puck, but caught Bates’ skates, hauling him down. The referee signaled a penalty shot and for a brief moment, the Islanders faithful depended on Bates.

A win would even the series up on their way back to Toronto. A loss would hand the momentum to the Maple Leafs with the need for three wins in a row by the Islanders. Michael Peca took Bates aside to talk about veteran goalie Curtis Joseph.

Ken Morrow, an Islanders defenseman during the early 1980s, said, “I’ve never heard the building louder than when Shawn scored that penalty shot goal.” The goal, the first penalty shot goal in Islanders playoff history, evened up the series and gave Islander fans hope that the team could continue their magical run to the second round. Even though they went on to lose in seven games, this goal is cemented in the hearts and minds of modern Islander fans.

What are your favorite Islanders goals? Did they make the list?