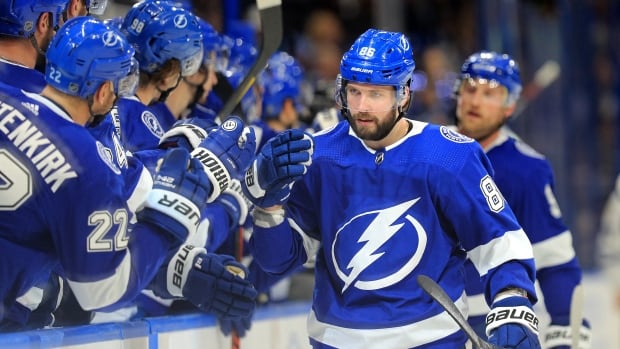 This is an excerpt from The Buzzer, which is CBC Sports’ daily email newsletter. Stay up to speed on what’s happening in sports by subscribing here.

Here’s what you need to know right now from the world of sports:

Quick note before we get started: no newsletter Monday on account of the holiday. Back Tuesday.

On Saturday — 143 days after putting its season on pause — the NHL will finally play meaningful games again. It’s cutting right to the chase, too. Unlike the NBA, which is having its teams play eight more de facto regular-season games each, the NHL is going straight to an expanded version of the playoffs.

Refresher on how this will work: The first stage, branded the Stanley Cup Qualifiers, consists of two parts. The more interesting one matches up the 5th through 12th seeds in each conference for best-of-five series. While those are going on, the top four seeds in each conference play a round robin against each other. Everyone in the round-robin is guaranteed to advance, but their records in these games will determine seeding for the conventional 16-team, best-of-seven Stanley Cup playoff bracket that follows. The No. 1 seed in each conference gets to play the lowest-seeded survivor from the best-of-five series, and the teams will be re-seeded after each round so that the top remaining seed always gets to play the weakest seed.

The four teams in the East round-robin are (in order of best to worst record) Boston, Tampa Bay, Washington and Philadelphia. In the West it’s defending Cup champion St. Louis, Colorado, Vegas and Dallas.

The Stanley Cup champ is more likely to come from that group of eight. Most bookmakers have Tampa Bay as the favourite to win the Cup, but the odds suggest it’s a wide-open race. Boston, Vegas and Colorado are all packed in closely behind the Lightning, with several other teams not far away.

Some teams will undoubtedly rise up the board if they survive their best-of-five series. Let’s take a quick look at those matchups:

#5 Edmonton Oilers vs. #12 Chicago: There’s plenty of star power in this battle between two of the leagues’ top-heaviest teams. The Oilers have the NHL’s No. 1 and No. 2 point scorers in Leon Draisaitl (an MVP finalist) and Connor McDavid (the best player in the world). Chicago’s Patrick Kane had 84 points in 70 games this season, and Jonathan Toews is one of the top two-way players of his generation.

#6 Nashville Predators vs. #11 Arizona Coyotes: Probably the least interesting matchup, but there’s some freshness to it. The Coyotes are making their first playoff appearance since 2012, and Arizona star Taylor Hall is making just the second of his career.

#7 Vancouver Canucks vs. #10 Minnesota Wild: Vancouver is back in the playoffs for the first time in five years and looking to win a series for the first time since falling one victory short of the Stanley Cup in 2011. The Wild are the deeper team, but the Canucks have more stars, including last year’s rookie of the year (forward Elias Pettersson) and also possibly this year’s (defenceman Quinn Hughes, who’s a finalist for the award).

#8 Calgary Flames vs. #9 Winnipeg Jets: The only all-Canadian matchup is one we haven’t seen in the playoffs since the 1987 Smythe Division semifinals. Top to bottom, Calgary’s skaters are stronger, but the Jets have one of the best goalies in the league in Connor Hellebuyck, a finalist for the Vezina Trophy.

#5 Pittsburgh Penguins vs. #12 Montreal Canadiens: Everyone is calling the Habs impostors because they had basically no chance of making the playoffs the conventional way this year. But a best-of-five series introduces even more randomness into the already notoriously random NHL playoffs, and Carey Price can steal one of these if he gets hot. But he’ll be facing a healthy and rested Sidney Crosby and Evgeni Malkin.

#6 Carolina Hurricanes vs. #11 New York Rangers: This one looks fun. The Rangers’ Artemi Panarin finished third in the league in scoring to earn an MVP-finalist nod, and he and Mika Zibanejad are a dynamite tandem. Carolina made a surprising run to the conference finals last year, but its goaltending is still a big question mark.

#7 New York Islanders vs. #10 Florida Panthers: The Panthers spent a ton in free agency, but they were probably on their way to missing the playoffs before they got rescued by the expanded playoff format Still, they have a pair of stars in Jonathan Huberdeau and Alexander Barkov, and a high-ceiling goalie in Sergei Bobrovsky. The Islanders are a classic Barry Trotz team: a collection of no-names who beat you with effort and dedication to their brilliant coach’s stifling system.

#8 Toronto Maple Leafs vs. #9 Columbus Blue Jackets: A fourth consecutive opening-round exit would be devastating to the Leafs and their fragile fan base. So it’s a bit cruel that they drew the team who shocked juggernaut Tampa in round 1 last year. Columbus, though, won only three of its last 15 games before the NHL shut down the regular season.

A few more things to note: From now through the quarter-finals, all Eastern Conference games are being played in Toronto. Edmonton is hosting the Western games, and will host both conference finals and the Stanley Cup final.

As for the schedule, it’s a binge-watcher’s dream. Five games are on tap Saturday, with start times ranging from noon ET to 10:30 p.m. ET. They’re staggered in such a way that you’ll be able to watch about 13 consecutive hours of hockey with very little gaps in the action (please consult your doctor first). A similar slate is in line for at least the first six days, and probably a bit longer unless there are a bunch of sweeps. This handy graphic from the NHL lays out the full schedule for the Stanley Cup Qualifiers:

Another baseball game was postponed — and more might be coming. Today’s matchup between St. Louis and Milwaukee got called off after two Cardinals players tested positive for COVID-19. That makes three games on today’s schedule postponed because of positive tests. Philadelphia-Toronto and Washington-Miami are the others, and their games through the weekend have already been nixed. At our publish time it was unclear what will happen with the Cardinals-Brewers games on Saturday and Sunday. It’ll also be interesting to see if the Minnesota Twins and Cleveland get pulled into this. The Cardinals said that their positive results came from tests conducted on Wednesday, prior to a game in Minnesota. The Twins are scheduled to play Cleveland tonight, Saturday and Sunday. Meanwhile, the Miami Marlins’ outbreak resulted in a 20th positive test today. The count is up to 18 players and two coaches. Read about the latest in baseball’s growing list of problems here.

The Canadian Elite Basketball League’s tournament has been quite competitive. After the 0-2 Ottawa Blackjacks beat the 2-0 Fraser Valley Bandits last night, all seven teams were either 2-1 or 1-2 at the halfway mark of the round robin. This stage runs through Wednesday. At that point, the top two teams will get a bye to the semifinals while the teams ranked 3-6 will square off in a pair of quarter-final matchups on Thursday night. Every game in the tournament is being streamed live on CBCSports.ca, the CBC Sports app and CBC Gem. Today’s matchups are Edmonton vs. Niagara at 3 p.m. ET and Saskatchewan vs. Guelph at 5:30 p.m. ET. Both of Saturday’s games — Hamilton vs. Fraser Valley at 1:30 p.m. ET and Edmonton vs. Saskatchewan at 3:30 p.m. ET — will also be broadcast live on the CBC TV network. Stream everything live and see the full schedule here.

The LPGA Tour is back. The first tournament since mid-February teed off today in Ohio. Canada’s best player, Brooke Henderson, isn’t there. The world No. 7 decided to skip the first three events and return for the next major, the British Women’s Open on Aug. 20. The only Canadian in the field this week is 107th-ranked Alena Sharp. If not for the pandemic, she and Henderson would be in Tokyo right now competing in the Olympics. Read more about Sharp here.

And one more thing…

The NBA is back, which is great. But so is load management, which is not.

It was genuinely uplifting to watch the return of meaningful NBA games last night. They looked and sounded as close to normal as you could hope under these circumstances. And the moment before the opener in which every single player, coach and referee involved in the Utah-New Orleans game took a knee for the national anthem was quite powerful.

But it was not so great to be reminded that load management is still very much a thing. Star rookie Zion Williamson, like the rest of the league, had been off for four and a half months. He’s now nine months removed from the arthroscopic knee surgery that was initially supposed to keep him out for 6-8 weeks, and he already came back and got 20 games under his belt before the pandemic hit. So you’d think he’d be good to go.

And yet, in the final few minutes of a tight, nationally televised game last night, New Orleans refused to budge from the minutes restriction it has placed on him. Zion came out of the game with 7:19 left and never returned — even when the Pelicans got the ball with 6.9 seconds left and trailing by two. They missed a potential game-winning three and lost. After the game, coach Alvin Gentry said “We wish we could have played Zion down the stretch. But he had used the minutes that had been given to us.”

It’s understandable that New Orleans would want to be protective of Zion. He has a history of knee injuries and the Pelicans’ chances of winning a championship this year are extremely slim. So in some ways it makes sense to play the long game — for both the team and for Zion. But New Orleans still has a chance to make the playoffs, and one of the selling points of this final stretch of regular-season games (or “seeding games” as the NBA has branded them) was supposed to be watching Zion lead his team on that push. Now we know that isn’t the top priority for the Pelicans.

This kind of indifference is something the league might have to reckon with before long. It’s become pretty plain that many teams and players don’t really care about the regular season. Pretty soon, fans might stop caring too.

You’re up to speed. Have a good long weekend.