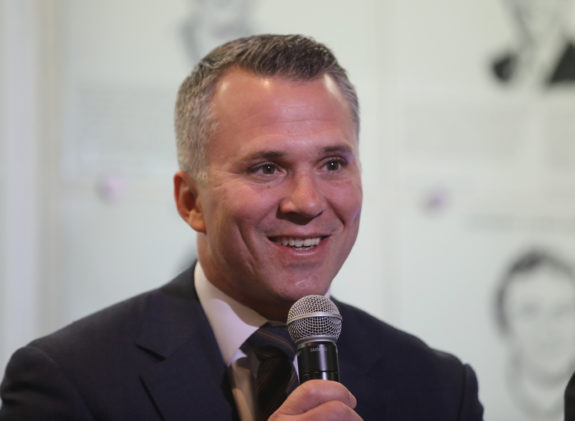 July 31 is full of big names. One of the greatest undrafted players in the history of the National Hockey League signed with the team where he became a Hall of Famer. One of the greatest goaltenders of all-time returned to where he had great success. Plus, the best coach in league history took a new position to work with a very familiar face.

The Tampa Bay Lightning made a free-agent on July 31, 2000, that changed the direction of the franchise and helped them win a Stanley Cup just four years later. It wasn’t a big-money superstar, but rather an undrafted player looking for a chance with a new team.

This was the date when the Lightning signed Martin St. Louis, who had spent the previous two seasons with the Calgary Flames. He played 69 games with the Flames, predominately on the fourth-line, and scored just four goals and 20 points. He was put in a better role that showed off the offensive game that made him a star at the University of Vermont.

St. Louis’ breakout season came in 2002-03 when he scored 33 goals and 70 points. The 2003-04 season turned him into a star. He won the Art Ross for leading the league in scoring with 94 points. He also won both the Hart Trophy and Pearson Award (now the Lindsay Award) for being voted the top player in the league by both the writers and players. He scored nine goals and 24 points in the postseason to help the Lightning win their first Stanley Cup in franchise history.

His time in Tampa Bay came to an end in 2014 when he was traded to the New York Rangers. He is the all-time franchise leader with 588 assists and 953 points. St. Louis is second all-time with 972 games played and third with 365 goals.

Dominik Hasek signed a one-year contract with the Detroit Red Wings on July 31, 2006. Hasek was part of the 2002 Stanley Cup championship team in 2002. After the NHL returned from the lockout that wiped out the 2004-05 season, he played one season with the Ottawa Senators.

Bowman Heads to the Windy City

Scotty Bowman is the greatest coach in the history of the NHL. When he retired in 2002, he had amassed 1,248 regular-season wins and well as 223 postseason victories to go along with nine Stanley Cup championships.

Bowman remained with the Red Wings as a special consultant after he stopped coaching. On July 31, 2008, he joined the Chicago Blackhawks senior advisor of hockey operations. This gives him the chance to work alongside his son Stan, named after the Cup, who is the Blackhawks’ general manager. He would get his name on the Stanley Cup three more times, as an executive, in 2010, 2013 and 2015.

The Pittsburgh Penguins hired Les Binkley as a scout on July 31, 1989. Binkley was the starting goaltender for the Penguins’ inaugural season of 1967-68 and played for them until 1972. He was still a member of the scouting staff when the Penguins won back-to-back championships in 1991 and 1992.

On July 31, 1995, the Philadelphia Flyers signed free agent Joel Otto, who had spent the previous 11 seasons with the Calgary Flames, winning a Stanley Cup in 1989. Otto played three seasons with the Flyers, scoring 28 goals and 80 points in 213 games.

The Carolina Hurricanes signed veteran defenseman Kevin Hatcher, on July 31, 2000, who spent the previous season with the New York Rangers. He played 57 games for the Hurricanes during the 2000-01 season, his final in the NHL. Hatcher played 685 of his career 1,157 games with the Washington Capitals. He also spent time with the Dallas Stars and Penguins.

The Nashville Predators acquired defenseman Andy Delmore from the Flyers, on July 31, 2001, in exchange for a third-round pick in the 2002 NHL Entry Draft. Delmore had two nice seasons with the Predators, scoring 34 goals and 72 points before getting traded to the Buffalo Sabres. The Flyers traded the pick from the Predators to the Phoenix Coyotes, who selected Joe Callahan.

A very impressive group of 22 current and former NHL players have been born on July 31. Bryan Hextall Sr. is the lone Hockey Hall of Famer of the group, so far. He was born on this date in 1913, in Grenfell, Saskatchewan. He played 11 seasons in the NHL, all with the Rangers, scoring 187 and 367 points. He scored the overtime goal that clinched the 1940 Stanley Cup championship.

He is the patriarch of the Hextall family. His sons, Bryan Jr. and Dennis played a combined 1,230 NHL games. He is the grandfather of goaltender, and former Flyers general manager, Ron Hextall as well as broadcaster Leah Hextall.

Dale Hunter, born in Petrolia, Ontario, on July 31, 1960, played in the most games and had the most assists of this group. He played in 1,407 games with the Quebec Nordiques, Capitals and Colorado Avalanche, picking up 697 assists and 1,020 points.

Evgeni Malkin, who is celebrating his 34th birthday today, is the leading scorer. He has 416 goals and 1,076 points up to this point. He and the Penguins will be opening up a Qualifying Round series versus the Montreal Canadiens on Saturday night.