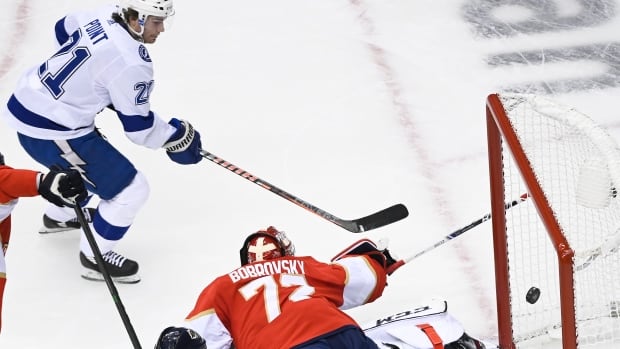 Brayden Point had two goals and two assists as the Tampa Bay Lightning blanked the Florida Panthers 5-0 Wednesday in an NHL exhibition game.

Nikita Kucherov also had two goals and added an assist for the Lightning, while Luke Schenn also scored.

Andrei Vasilevskiy stopped 15 shots to pick up the shutout.

Point put the Lightning up 2-0 after 20 minutes with a pair of first-period goals.

Kucherov struck less than two minutes into the second period with a power-play goal to make it 3-0.

Photographer Dave Sandford gives insight into what life is like inside the NHL bubble for teams and players in Edmonton. He says everyone is taking the rules surrounding the pandemic very seriously.  9:21

Schenn made it 4-0 just over five minutes into the second, and Kucherov capped the scoring in the third.

The Panthers start a best-of-five playoff qualification series with the New York Islanders on Saturday.

The Lightning play their first game of the seeding tournament among the top four Eastern Conference teams when they face Washington on Monday.

In other exhibition action Wednesday, Carolina faced Washington and the New York Islanders took on the New York Rangers at Toronto’s Scotiabank Arena.

Gabriel Landeskog scored the winning goal on a power play in the second period and added an assist as the Colorado Avalanche edged the Minnesota Wild 3-2.

Joonas Donskoi opened the scoring 1:25 into the game for Colorado, while Nathan MacKinnon also scored.

Philipp Grubauer and Pavel Francouz combined to make 32 saves for Colorado, while Alex Stalock and Devan Dubnyk teamed up to make 26 saves for Minnesota.

Alex Ovechkin had a pair of goals, including the eventual winner, as Washington held on to beat Carolina 3-2.

Ovechkin made it 1-0 for the Capitals less than nine minutes into the game, with Evgeny Kuznetsov adding the other in the first period for a 2-1 lead entering intermission. Ovechkin’s scored again at 12:25 of the second period for a two-goal lead.

Vincent Trocheck had a first-period goal for the Hurricanes while Teuvo Teravainen added another in the third to make it a one-goal game.

Braden Holtby and Vitek Vanacek split goaltending duties for Washington, with each allowing a goal on 27 combined shots. Carolina’s Petr Mrazek allowed three goals on 16 shots as James Reimer turned away all nine he faced.

The Capitals face the Tampa Bay Lightning Monday in an Eastern Conference seeding tournament game, while the Hurricanes opens their best-of-five playoff qualification series against the New York Rangers Saturday.