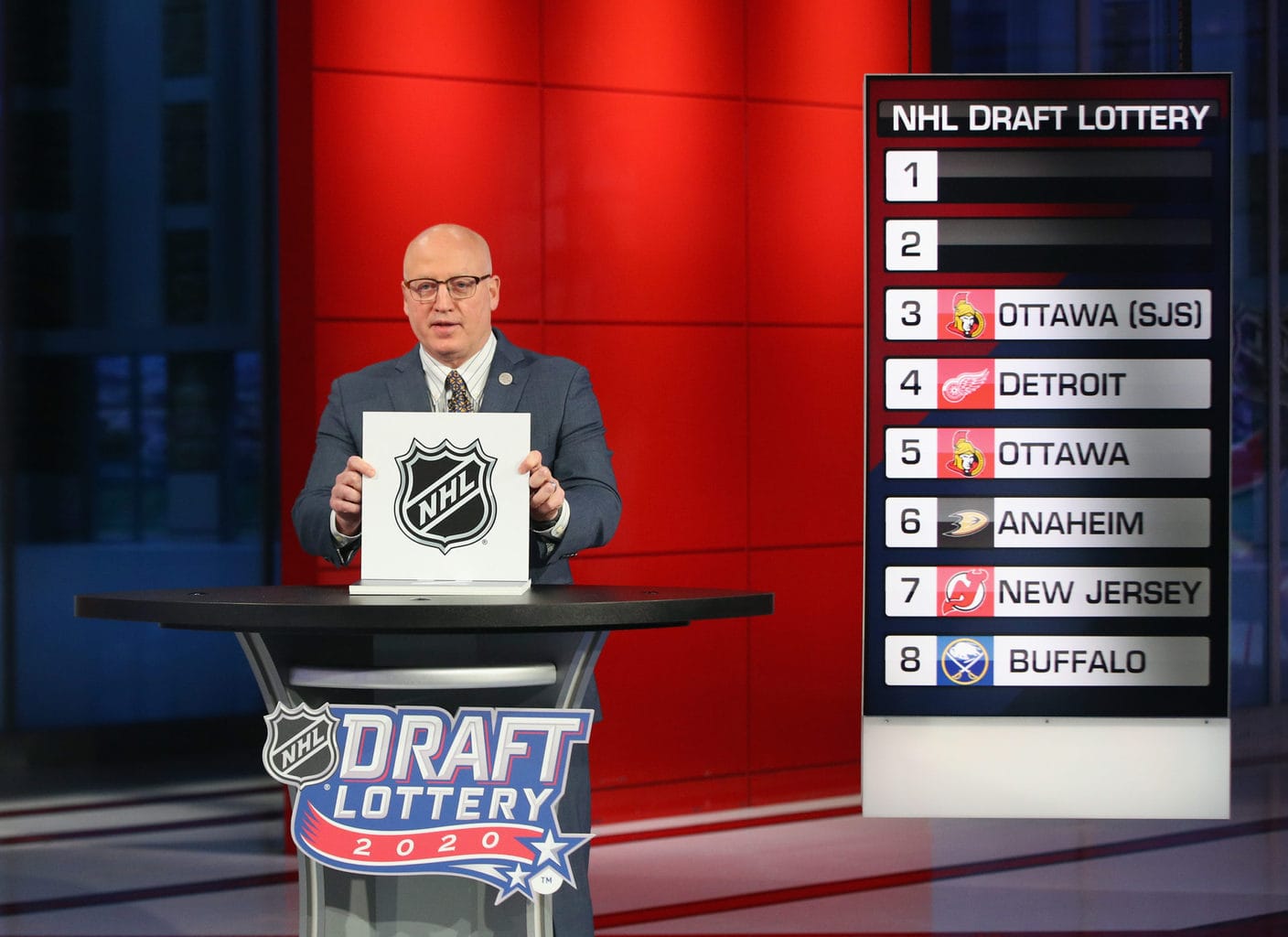 The first-overall pick in the NHL’s 2020 Entry Draft will be determined in a second draft lottery. Much to the disappointment of the teams with the worst records in the 2019-20 regular season, a team that finished with a record of at least .500 will get the top selection. Only the top four teams in each conference were excluded from the draft lottery process.

At stake is young superstar-in-the-making Alexis Lafrenière. The young left wing is ranked at the top of the prospect pool by The Hockey Writers draft experts, including Josh Bell’s Top 155 Prospects and Larry Fisher’s top-500. Of course, whichever team does go to the podium first may choose any of a number of other bright young stars, but Lafrenière is the consensus best prospect.

The First Draft Lottery: What the Heck Happened?

The initial lottery, held June 26, was supposed to determine the order of the draft. The Detroit Red Wings had the best individual odds at 18.5%. The Ottawa Senators came next, with their own pick rated at 13.5% and a pick they received in the Erik Karlsson trade with the San Jose Sharks (September 2018) at 11.5%, for a combined 25% chance of picking first.

The other five teams that won’t be playing in the postseason include the Los Angeles Kings (9.5%), Anaheim Ducks (8.5%), New Jersey Devils (7.5%), and Buffalo Sabres (6.5%). “Placeholders” were included in the lottery for whichever teams lose in the Qualification Round. Labeled “Team A” through “Team H,” they had percentages ranging from 6% to 1%. The placeholders had a cumulative 24.5% chance of winning the lottery.

Related: Two of the Cheapest NHL Trades Ever

That 24.5% came through. When the dust cleared, Team B, with a 5% chance, landed in the top spot, followed by the Kings, Senators (from San Jose), Red Wings, and again the Senators.

The second lottery, to determine which team becomes “Team B,” will be held following the Qualification Round. Half of the 16 teams participating will advance to the actual 2020 NHL Stanley Cup Playoffs. The other eight teams will each have an equal chance to win the second lottery at 12.5%.

One of the eight teams will pick Lafrenière (or another young stud). The other seven teams will select 9th through 15th. There are plenty of good prospects in the top half of the first-round projections (see the Bell and Fisher links above, as well as the NHL Central Scouting Bureau list of top North American and European skaters and goalies). Many of the players ranked 9–15 have great potential, so the Qualification Round losers who don’t win the second lottery are likely to select a player who can contribute down the road.

Now, let’s address the “elephant in the room.” Would any NHL team intentionally lose in the Qualification Round for a one-in-eight chance at getting the top pick in the 2020 NHL Entry Draft? I find that highly unlikely. Even if an organization’s management doesn’t believe their team has a chance to win the Stanley Cup this year, I can’t imagine the players themselves not playing to win.

There are also some conditional draft picks stemming from trades made in the past couple of years, but none would have any impact on the first-overall pick – the team that wins the second lottery will keep their pick.

The odds of winning the first draft lottery were assigned to teams based in reverse order of their success during the regular season. The Red Wings finished last in the league (a winning percentage of only .275), and so were given the best odds. That’s not how it’s going to happen in the second round. Regardless of a team’s success or lack thereof during the 2019-20 regular season, each loser in the Qualification Round will have a 12.5% chance of winning.

The teams participating in the Qualification Round have winning percentages ranging from .500 to .623, with regular season points ranging from 71 to 86:

In the second lottery, the Penguins, with a winning percentage of .623, 86 regular-season points, and 40 wins would have the same odds as the Canadiens, with a winning percentage of .500, 71 points, and only 31 wins. Under the format being used by the NHL for the second drawing, every participating team has an equal 12.5% chance to pick first in the entry draft. The Penguins and the Canadiens won’t both be in the second lottery since they play each other and only one can lose.

The NHL Qualification Round Matchups

Which Teams Will Actually Participate in the Second Draft Lottery?

Who knows? While the best-of-five Qualification Round series aren’t technically “playoff series,” they will sure feel that way to the players and the fans. Anything can happen in a series (see, for example, the 2019 four-game sweep of the Presidents’ Trophy-winning Tampa Bay Lightning by the second wild card Blue Jackets.)

While the odds makers in Vegas are, at least for now, seeming to favor the higher-ranked teams in just about every series, all it takes is a hot goalie or a forward with lucky tape on his stick to produce an upset. (The bookies seem to favor the lower-ranked Panthers over the Islanders by just a hair.) And a five-game series favors an underdog more than does a seven-game series. All we know for sure is that each of the eight teams that lose in the Qualification Round will have a one-in-eight chance of landing the top pick in the 2020 NHL Entry Draft.