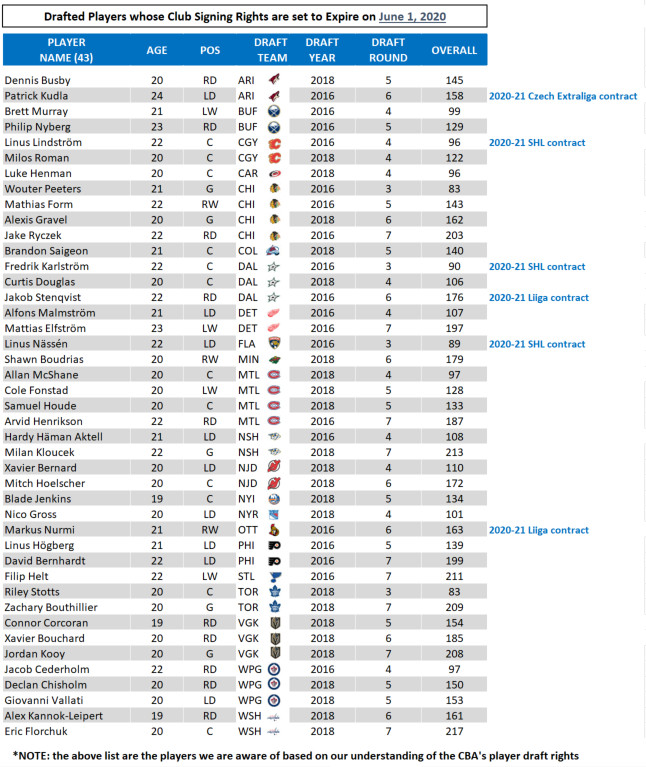 May take a Zadorov trade to get Byram in the lineup

Mike Chambers of the Denver Post: (mailbag) The Colorado Avalanche have pending restricted free agent defensemen in Nikita Zadorov and Ryan Graves. Graves will get a nice contract from the Avs, but Zadorov may not. If the Avs move Zadorov, Bo Byram would have a better shot at making the team next year. Already under contract for next season are Erik Johnson, Ian Cole, Cale Makar and Sam Girard.

Potential late first-round players that could still be on the board and who may interest the Avs include John-Jason Peterka, Seth Jarvis and Vasili Ponomaryov.

Offseason priorities for the Sabres

Joe Yerdon of The Athletic: The Buffalo Sabres season is officially over and they’ve missed the playoffs again. Having the regular season cut short may have saved them a $2 million bonus to Rasmus Dahlin if he had finished in the top 10 for assists among defensemen. It would have carried over to next season and hurt their cap space.

The Sabres have a list of pending free agents, with Sam Reinhart at the top of their list. Reinhart was second in scoring for the Sabres with the 50 points.

Offseason priorities will also include finding an offensive, second-line center. Dylan Cozens and Casey Mittelstadt will get a chance but adding a veteran could ease the pressure. Adding a center may mean they’ll need to go the trade route.

Adding some penalty kill help would be another area they need to look it.

TSN 1200: Ottawa 67’s forward Mitch Hoelscher said that he doesn’t expect that he will be signed by Monday’s deadline by the New Jersey Devils.

Cap Friendly: The NHL’s deadline for teams to sign 2018 draft picks by June 1st is still in place.

A list of players who must sign by next Monday or teams will lose their signing rights.