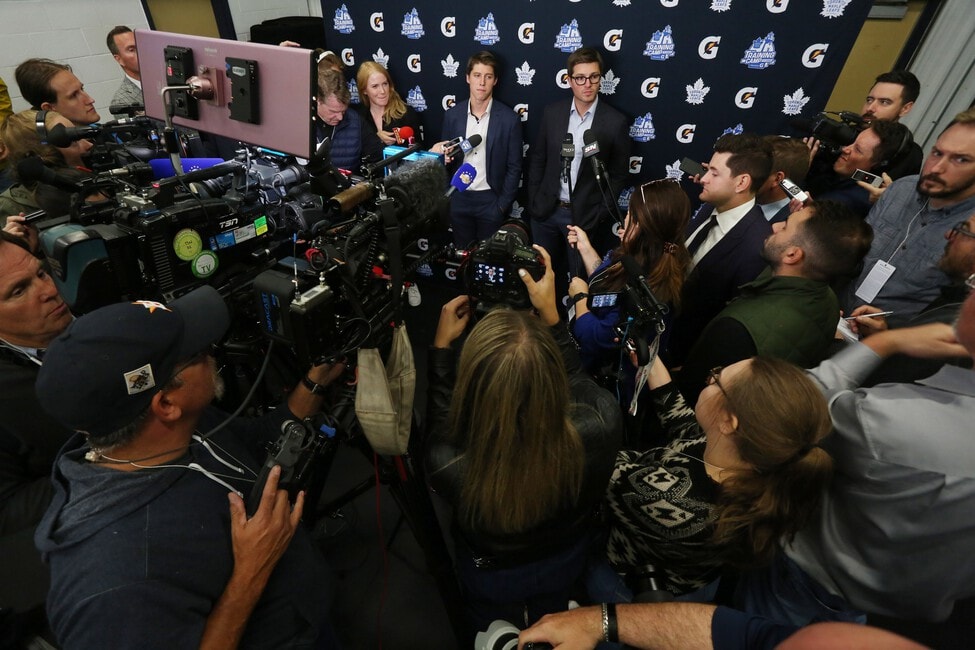 In today’s NHL rumor rundown, the NHL’s announcement yesterday has thrown a pebble in the water of a return to play and created a ripple effect for many teams.

There are questions about bonuses and the hub cities, and frankly whether or not this 24-team play-in is considered the playoffs or not? So too, there is uncertainty around trade conditions and league statistics, and just how the NHL Draft Lottery will change things.

Finally, the seven teams that are officially out of the playoffs are able to start making offseason arrangements and have some business to take care of. The biggest news comes out of the Buffalo Sabres organization.

Is The NHL Officially in the Playoffs Now?

NHL commissioner Gary Bettman announced the league is planning a 24-team Return to Play format on Tuesday. While this isn’t an indication hockey is back, it gives some clarity to the NHL’s plans moving forward. Not everything is clear, mind you.

What Bettman didn’t really answer was whether or not the play-in games were part of the playoffs, saying only that they should be treated as a separate set of games.

The lack of detail has left people with questions, including Pierre LeBrun of TSN who did his best to try and explain to fans what this means for coaches, players, and others who are affected by playoff bonuses.

“I spoke to one source who said that the current plan is to treat that play-in round as a special set of games. Neither regular season games, because the regular season is over, but neither official playoffs. It’s a qualifying round to get into the first round of the Stanley Cup playoffs, then again, I spoke to another league source that he said as far as he’s concerned, it is now the postseason.

So, this is going to matter because you have coaches who have bonuses for making the playoffs, you have Vancouver’s first round draft pick that automatically transfers to New Jersey if they make the playoffs, well, are they in or do they have to win their play-in series? These are questions that still need answers.”

And, while it seems teams like the Oilers have announced Leon Draisaitl as the Art Ross Trophy Winner and Boston has been declared the Presidents’ Trophy team, there appears to be the slightest bit of uncertainty surrounding those announcements being official because many aren’t sure where to allocate the points that comes from the play-in games.

Bettman noted that the goal for the NHL was to name two hub cities that would serve as sites for NHL games, at least one of which was hopefully in Canada. Unfortunately, deputy commissioner Bill Daly said the Canadian government’s mandatory 14-quarantine for anyone entering the country would make for a non-starter in terms of the NHL hosting in one of the mentioned Canadian locations.

The NHL is trying to work things out, but so far, they’ve gotten no further. “We are having various discussions with various different departments in the Canadian government,” Daly added. “We don’t have a resolution there, but it’s an ongoing dialogue.”

For cities like Vancouver and Edmonton, where the Canucks and Oilers play, this one snag could jeopardize months worth of work and hundreds of pages worth of documents trying to show the viability of their markets as sites that would serve the needs of the league, the players, and their families.

TSN’s Ryan Rishaug is reporting that Alberta’s Chief Medical Officer of Health Dr. Deena Hinshaw sent a letter to Gary Bettman, outlining her support for Edmonton to be a hub city. She discussed how the quarantines could work, guidelines and medical measures, and is basically putting on a full-court press on behalf of the province.

For the Buffalo Sabres, big news came quickly after the announcement as the team shared they were extending the contract of GM Jason Botterill.

Team president and co-owner Kim Pegula told The Associated Press on Tuesday that the Sabres are confident in the job Botterill has done and that they’d planned to retain him before the season was paused in March. Pegula noted how important it will be to maintain continuity in what will be an extended off-season for the club.

The 24 year-old forward is a restricted free agent who is due for a big raise and a long-term commitment. With the salary cap situation unclear, it may take a while for a deal to get done. The Sabres have a lot of contracts ending and many decisions to be made, but getting Reinhart squared away has to be the priority.

James Mirtle and Jonas Seigel of The Athletic ask an interesting question when it comes to the Toronto Maple Leafs and how the new format of the Draft Lottery might affect their first-round pick.

Should the Maple Leafs lose their play-in round, things will change.

Toronto dealt its first-rounder to Carolina in the Patrick Marleau trade last June. But the pick was top-10 protected, which means if the Leafs somehow end up winning the lottery and picking higher than 11th overall, they will defer the traded pick to the 2021 draft.