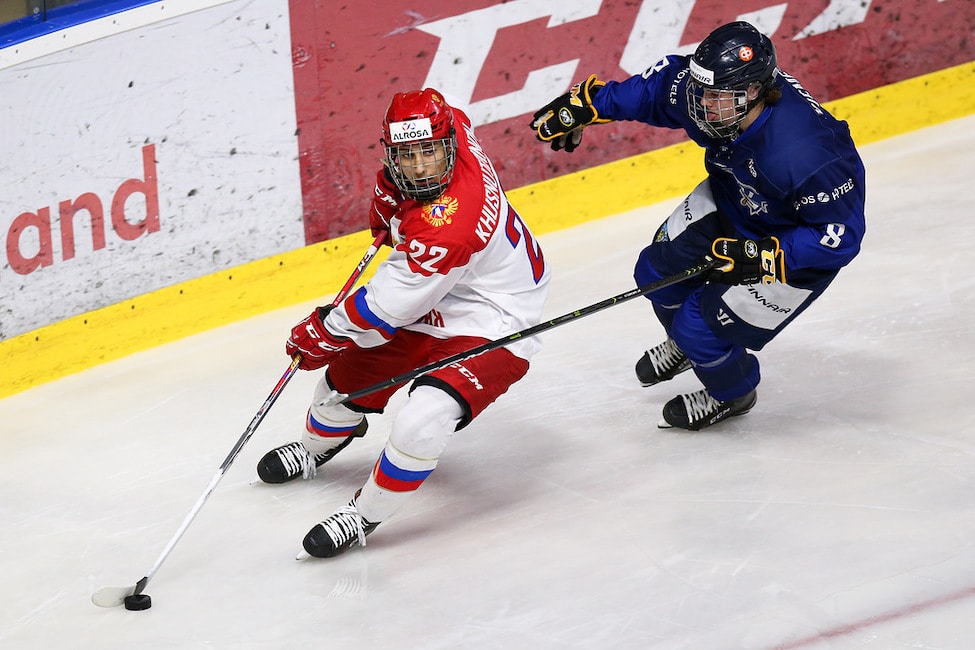 The Colorado Avalanche’s NHL roster is one of the best in the league, and the team has salary cap space to acquire talent over the next few seasons. Top prospects who have seen little to no NHL action are expected to challenge for serious NHL playing time next season (Bowen Byram, Connor Timmins, Shane Bowers, Martin Kaut).

The club has six picks in the 2020 Draft – one in each of the seven rounds except for the second. With Timmins and Bowers expected to join Sam Girard and Cale Makar in the nucleus of promising offensive defenders, it’s likely that the Avs choose a forward in the first round.

I think the Avs swing for the fences in the first round, selecting Russian center Marat Khusnutdinov. It’s a tough call between Khusnutdinov and Finnish center Roni Hirvonen, but I’m going with upside here. The Avs have more than enough depth to last them three to four years as Khusnutdinov develops overseas. NHL prospect analyst Will Scouching had rave reviews of Khusnutdinov in his November 2019 Preliminary Draft Rankings:

Similar to Marco Rossi, every time Khusnutdinov steps on the ice so far when I’ve seen him, he’s awesome…he’s playing exceptional two-way hockey, he sets up behind the net to make a play beautifully. He’s scoring primary points on 75% of goals scored while he’s on the ice. He’s getting points on 92%. He’s a player I know you could grab in the 2nd, but I’m a big, big believer in him, especially considering his age…if he can get stronger with better line mates and finishing ability on his own, he could be a steal.

After Alex Newhook, the Avs don’t have an impact NHL prospect down the middle (Shane Bowers’ upside is limited), so Khusnutdinov also fills a position of need within the organization. I think his future in the NHL is down the middle, whereas Hirvonen may kick out to LW to debut in the majors quicker.

Jacob Perrault received some consideration, as did Lukas Reichel, but Perrault is a one-trick pony at this stage and the Avs are flush with wing prospects. What the Avs do not need to do here is draft a defender. Today’s NHL prizes defensemen with offensive talent, and this draft class is chock full of them. There are over a dozen who will go anywhere from 20 to 60, and that’s excluding most of the deep class of USNTDP blueliners.

The benefit of Lukas Cormier or William Wallinder on the Avs is smaller than Khusnutdinov or Hirvonen because of how loaded the big-league club already is with young defensemen. Ironically, drafting an offensive defender in the first round almost strengthens the argument for drafting a two-way forward because of the defensive coverage responsibility that will fall on the forwards when the Avs push out weak defensive defenders.

The Avalanche traded their 2020 second-round pick to the Washington Capitals in the Andre Burakovsky deal.

A record amount of US U-18 National Team players were selected in the 2019 NHL Draft, so this season’s team did not have the benefit of playing with experienced players.

Already possessing an NHL frame and an aggressive style up and down the boards, Peterson should develop into a middle-six forward under the tutelage of Boston University head coach Albie O’Connell. Last Word on Hockey describes Peterson’s outlook:

As long as he can continue to add muscle to his frame and still keep his speed, he will be an NHL player. The question becomes if he has the untapped offensive potential to be more than that. It may be possible, but his production seems a bit lacking compared to where his skills are at. This will be a question that his future NHL team will put to their development department.

If Peterson isn’t available, then Evan Vierling or William Dufour would be great alternatives.

Puutio played on Finland’s U-18 team’s top defense pair at the 2019-20 Hlinka Gretzky Cup. He has good vision in transition, is a strong skater, and possesses a heavy but quick shot from the point. I really like his instincts in his own zone. His good positioning helps his team during the transition and allows him to multi-task in coverage.

In 56 games in the WHL this past season, he scored 28 points. That’s pretty good especially considering that he is only 17. He’s returning to Everett in 2020-21 where the Avs can better document his development. (from ‘Silvertips notebook: Puutio expected back despite pro deal,’ Everett Herald, 04/21/2020) I could see him playing in the OHL through the 2021-22 season and then transferring to the AHL for two seasons until he’s ready for his full-time NHL roster spot for the 2024-25 season. He will still only be 22 years old at that time.

Hardie would be a nice sneaky pick here. His two-way game is raw, but he was a great scorer on a mediocre team this season (63 points in 59 games). Questions remain as to whether he can put on muscle mass while still retaining his quickness and first step.

Since he basically came out of nowhere after scoring just 0.35 points per game in his OHL rookie season, the scouting on him isn’t as deep as other top OHL scorers and he’s not a universal top 100 player on boards.

Son of Bob Mancini, a USA Hockey regional development manager and former coach, Victor Mancini spent the 2019-20 season in Sweden, playing mostly for the under-20 Frölunda HC J20 squad as a 17-year old. He credits the Swedish hockey model for his success:

Hockey in Sweden was different … more focused on player development. They still take great pride in winning, but there’s a lot of time and effort in off-ice training, getting bigger and faster and stronger off the ice and how it relates to making you better on the ice. We would have individual skill days before school for skating and puck-handling. After school, we’d come back for team practice. A lot of the work is about progression. It’s not about where we are now. It’s about how good we will be.

Mancini is a big defender, already standing 6-foot-4, 201 pounds. He ranked third in SuperElit goal scoring by a defenseman this season and has a cannon from the point.

He’s a cerebral player and has mature instincts about when to use the body or the stick to disrupt attacks. His skating should improve this season at the University of Nebraska-Omaha, and hopefully he sees time on the power-play.

I’m not alone thinking that Stacha is underrated and deserves to get drafted. From Will Scouch:

Stacha is a highly underrated modern defensive defender who showed quite well at times at the World Juniors.

Stacha is a late-bloomer in comparison, but he has shown great progress in the Slovakian league and could progress up the lineup as the tournament goes on. the Slovaks still have two solid prospects in defensemen Samuel Knazko and Marko Stacha.

He’s a good enough skater and has international experience to where he’s worthy of a dart-throw this late. I like national teamers who play tough defense and have the fundamentals down, especially so late in the draft.

Also, he spent 92 percent of his games playing in Slovakia’s top adult league as a 17-year old.

Here’s a recap of the Avs’ mock:

Optimistically, this class would provide the Avalanche with three middle-six forwards, and three bottom-three defensemen. That speaks to the depth of this draft but also to the needs of the organization. I go more into detail in an earlier article, but essentially, the Avs already have the talent at the top of their system and in their big-league squad where they can afford developmental time for prospects.

This is how the front office operates – it builds through the draft. It’s what keeps the salary cap hit low enough to where they have flexibility if needed to enter the free-agent market each offseason or at the trade deadline.