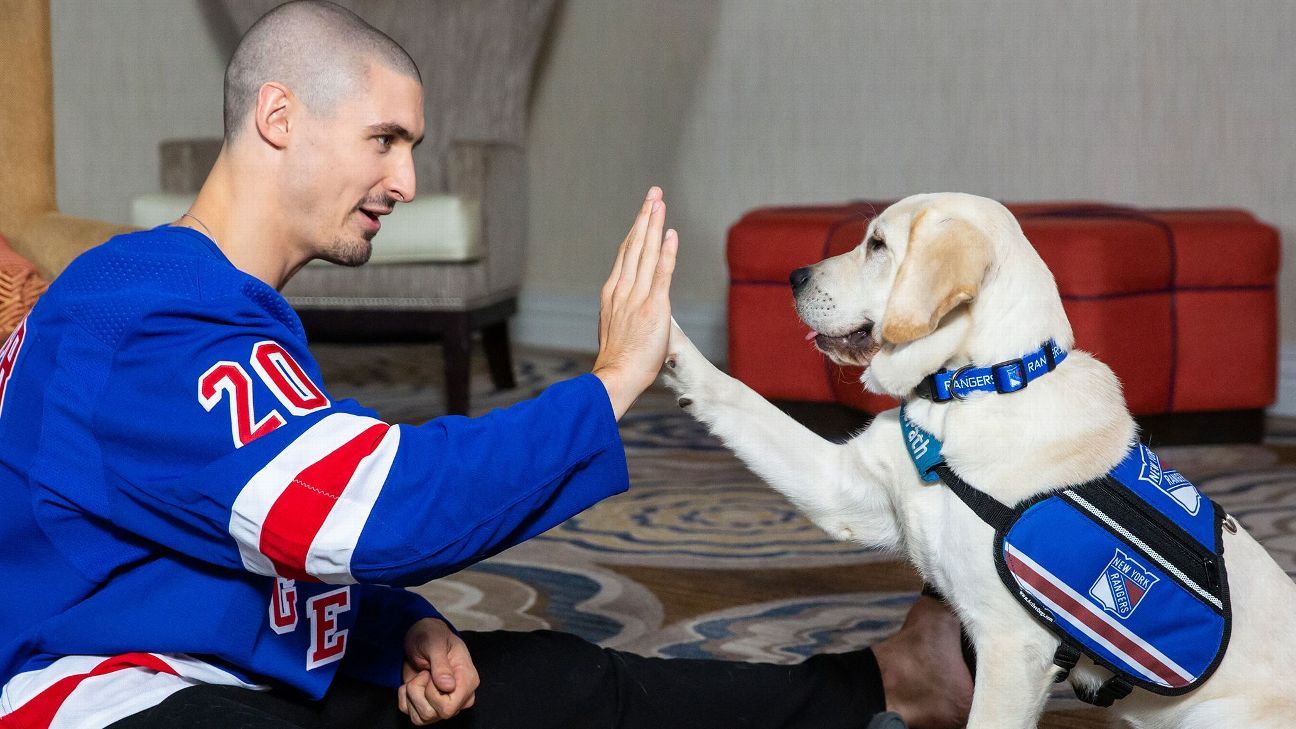 The New York Rangers‘ most significant recent free-agent acquisition might not have been superstar winger and MVP front-runner Artemi Panarin. Instead, their best signing might turn out to be someone who didn’t score a single goal — but still chewed and clawed his way into their hearts.

The Blueshirts became the first NHL team to add a service-puppy trainee to their roster when they introduced Ranger, a 9-month-old yellow Labrador retriever, just before the start of the 2018-19 season. The team had partnered with BluePath — a nonprofit that trains puppies to become service dogs who offer companionship, safety and independence to children with autism — to help socialize Ranger and prepare him for his future career.

“The Rangers were interested in the autism world because they do a lot of sports camps for kids with special needs,” said Michelle Brier, vice president of marketing and development at BluePath, which is based in Hopewell Junction, New York. “It was a very exciting thing for us, as a small nonprofit, to have them select us a partner. We bleed blue … just like any Rangers fan.”

Under the guidance of puppy trainer Saxon Eastman, a production assistant at Madison Square Garden, Ranger spent each day of the season at the team’s offices during business hours, then headed to special events, such as practices and games, to gain experience being around crowds.

“Chris Kreider really bonded with Ranger,” Brier said. “So did Mika Zibanejad. All the players seemed to like Ranger, but the two of them were particularly excited to see him every time. They went out of their way to hang with him.”

But while he made friends everywhere he went — and became a social media star — Ranger didn’t seem completely confident in certain situations.

“He started to show signs that he didn’t want to be a service dog,” Brier said. “A service dog has to be adaptable to an ever-changing environment, and to remain calm even when there’s a lot of chaos around them. Ranger really liked things to be a bit more consistent in his life.”

So after the season, when Ranger was about 18 months old, Eastman and her fellow BluePath trainers decided he was better suited to be a companion dog, rather than a service dog — and started looking for a new job for him. (Service dogs receive public access under the Americans With Disabilities Act, which allows them to go anywhere that the public is invited because they are helping to mitigate a disability. Companion dogs provide support in a plethora of ways in the home, but do not have the same public access.)

“We say in the service dog world that the dogs choose their careers,” Brier said. “It’s important for us to find something the dog can excel in.”

Even though he didn’t go on to become a service dog, Ranger clearly sparked a movement of canines in residence. Ten other NHL teams — the St. Louis Blues, Nashville Predators, Arizona Coyotes, Minnesota Wild, Montreal Canadiens, New York Islanders, Ottawa Senators, San Jose Sharks, Tampa Bay Lightning and Washington Capitals — have since added puck-chasing pups to their respective rosters. They are in various stages of training to become service dogs, ranging from seeing-eye companions to partners who help people with motor impairments or post-traumatic stress disorder.

Ranger’s trainers are delighted that other teams have followed suit. “We’re such believers in the service dogs movement, and how much service dogs can really enhance people’s lives,” said Brier, who notes that the other organizations that have partnered with NHL teams to train service dogs, like BluePath, rely on donations and volunteers to raise puppies before they are placed with families. “The fact that all of these teams have jumped on board is very, very cool.”

Autism is a developmental disability marked by differences in communication, social interaction and learning abilities. One in 54 children now has a diagnosis of autism in the United States, according to a report released by the Centers for Disease Control and Prevention on March 26 — a 10% increase from the previous report, two years ago, and the highest prevalence since the CDC began tracking the rates 20 years ago. About half of kids who are diagnosed with autism are prone to “elopement,” said Brier, meaning many parents find “it’s too frightening to leave the house with their child.”

Tricia Zarro was one of those parents.

“When my son, Danny, was diagnosed with autism he was minimally verbal,” Zarro said. “He was a flight risk. I had lost him a few times. And he was very disconnected and deep into his autism at the time.”

Zarro, a teacher in Dobbs Ferry, New York, researched service dogs and learned that they could assist Danny — and help build a bridge between him and his family. “If he couldn’t connect with a person, he could connect with an animal,” Zarro said.

Danny was matched with a service dog named Shade. She remained by his side, helping him learn to socialize and connect, until she died, at age 13, last April. To fill the huge void she left in their lives, the Zarros volunteered to babysit and help socialize puppies for BluePath — while considering how to proceed.

“My son no longer needed a service dog but still needed a dog with a certain skill set,” Zarro said.

Along came Ranger. While he wasn’t a good fit for a small child, thanks to his training with Eastman he was the perfect companion for Danny, who has grown out of his tendency to take off running into dangerous situations but benefits from having a specially trained pet.

“He gives high-fives and fist bumps,” Zarro said. “Certain skills that Saxon taught him for the life he lived before he came to us transfer very well for a teenage boy.”

April is Autism Awareness Month, and Thursday is World Autism Awareness Day. Because of the coronavirus pandemic, both will be acknowledged differently than usual this year, said Brier, who notes that children on the autism spectrum often have a particularly hard time with how social distancing measures have upended their routines.

“Given the way we’re living right now, the dogs’ roles have shifted a bit. For so many kids with autism, having a routine, something they can expect each day, is really helpful,” Brier said. “So, at a time when everyone’s routines are completely thrown out of whack, it’s extra difficult for kids with autism who are trying to figure this out. We’re seeing our dogs provide an enormous amount of emotional support at home.”

Ranger has been rewarded with extra belly rubs from Danny’s older sisters, Maddy, 21, and Kylie, 19, who are home from college because of the pandemic. And daily walks around the neighborhoods with Danny and Tricia have become more essential than ever.

“When Danny is connected to Ranger — literally and physically and metaphorically connected to him — he’s just more grounded. He communicates better, and helps share his feeling and emotions, while he’s walking his dog,” Tricia Zarro said. “The pandemic has been very challenging for us, as it has been for everyone. But the dog helps bring joy and routine. The amount of stress and anxiety that Ranger reduces in my family has been life-changing.”

After Shade died in April 2019, the prospect of opening their hearts to a new dog — and finding a new companion for Danny — was daunting. So the Zarros agreed to bring Ranger home, but only for a trial.

“I was nervous about finding the right fit,” Tricia Zarro said. “I didn’t want to rush into something and have it not work out. I peppered Caroline McCabe-Sandler [BluePath’s co-founder and director of training] with annoying questions like, ‘How will I know if he’s the right one? How am I going to make this decision?’

Zarro and her husband, Ernie, work at a sleepaway camp each summer. The entire family moves to upstate New York. So, in June 2019, Ranger went with them. After spending his first 18 months living and working in Manhattan, rising the subway back and forth to Madison Square Garden, he had become a certified city dog. “I’m not sure he’d ever played with a stick before,” Tricia Zarro said.

But Ranger quickly took to the outdoors. On the first day at camp, the family went for a long walk.

“We were deep in the woods,” Zarro said. “Danny was walking ahead a little bit, by himself. I wanted to see what Ranger would do.”

There was no one else around, and Zarro figured she could let Ranger run a little bit. So she unhooked him from his leash. He took off down the path, and for a moment Zarro feared she’d made a mistake. But as soon as he caught up with Danny, Ranger stopped.

“He looked up at him, then adjusted his pace to match Danny’s and started trotting alongside him,” Zarro said. “My heart just exploded. That was the moment I knew.”

The Zarros paused by a waterfall to take a family photo. Ranger sat down right next to Danny.

“I texted Caroline and told her, ‘It’s a fit,'” Zarro said. “She was crying, I was crying. I knew right away, when I saw that Ranger was happy around our family, that he was a good boy. But when I saw him look out for Danny, that’s when it became crystal clear that Ranger knew exactly what his job would be.”