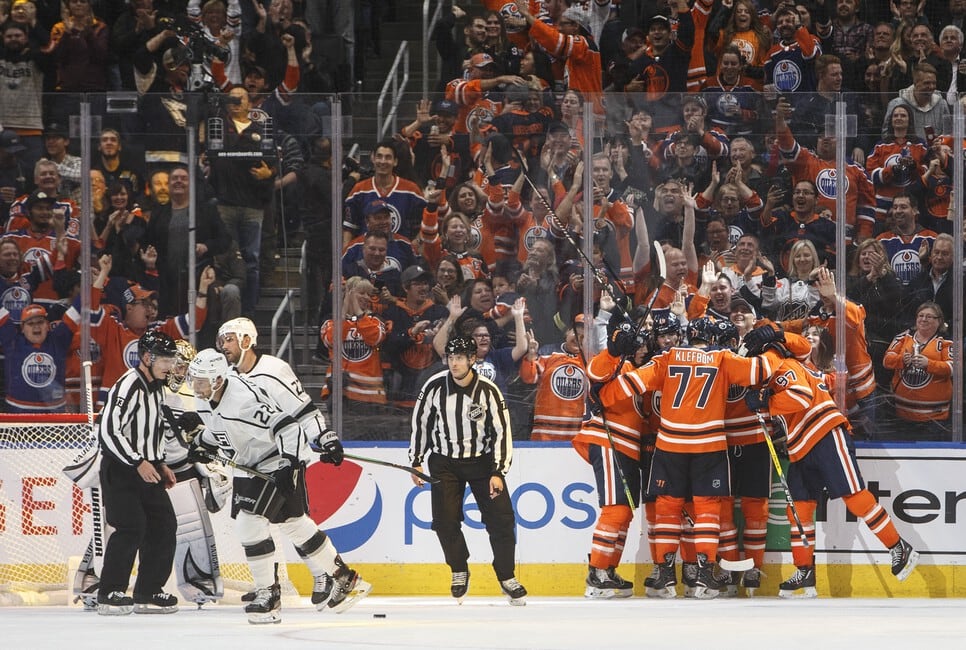 Out of all seasons to announce a pause, it had to be this one, didn’t it? It couldn’t have been during one of the three seasons that the Edmonton Oilers accumulated 62 points in the last decade? As frustrating and heartbreaking as this situation is (overall), it doesn’t change the fact that the playoff-hungry team produced a collection of crazy, exciting, memorable moments over the last 71 games.

So let’s hand out some awards for the most notable moments from the 2019-20 season while we await the fate of hockey!

And the award for the most memorable game, the most surprising, pivotal, annoying (and the list goes on) moment goes to…

When Connor McDavid smashed into the net after Mark Giordano dropped to the ice and stuck out his stick as an attempt to stop the speedy forward from scoring during the second period of the last game of the 2018-19 season, Edmonton fell into a whirlpool of worry. It also didn’t help that throughout the summer, management kept mum about No. 97’s recovery.

Even when the captain showed up for the Oilers’ first game of the season against the Vancouver Canucks, fans held their breath. Many wondered if he would still drive to the net with the same speed and ferocity. Would he still be the same McDavid? But fans’ worries vanished when No. 97 showed a familiar flash of brilliance during their season opener.

The award for the Most Sigh-Of-Relief Moment goes to… No. 97’s highlight-reel, game-winning goal against the Canucks. It proved that his knee injury was behind him. It was such a relief!

Is it worth even bringing this one up?

The 2019-20 Battle of Alberta encompassed several award-winning moments, including the most annoying moment. It all started when Matthew Tkachuk pummeled Zack Kassian with questionable hits.

At one point, the annoying Calgary Flames’ winger obviously saw that Kassian was in a vulnerable position behind the net, skated from above the goal line, and hit him. The “code” usually asks for people to fight back when they execute a potentially dangerous hit, but nope, this doesn’t apply to Mr. Turtle!

Which leads us to the award for the Most Annoying Moment:

When Tkachuk turtled while Kassian threw the pest around. The incident resulted in the Flames converting on the power play and taking a 4-3 lead, while Kassian sat in the penalty box. Oh, and No. 44 got a two-game suspension, too.

Keep in mind that the ragdoll bit wasn’t the annoying part (that was quite satisfying), it was the ensuing penalty, the breaking of the “code,” and the two-game suspension that makes this The Most Annoying Moment.

Let’s face it: McDavid has scored several highlight-reel goals over his career, but his goal at the Scotiabank Arena will go down in history as one of his best goals of all time. (Expect his tremendous goal against the Columbus Blue Jackets during his rookie campaign to pull a Kanye West on this statement, though.)

The Oilers have struggled in the Scotiabank Arena, but they came up big with a 6-4 win over the Toronto Maple Leafs.

So this award is a no-brainer! The Most Amazing Goal of the 2019-20 season (so far) goes to… No.97’s first-ever goal in Toronto, where he easily danced around Morgan Rielly and put the puck top-shelf.

This one is up for debate, but I remember feeling a fascinating combination of shock and excitement when this incident occurred during the third installment of the Battle of Alberta.

Without further ado, I present to you, the award for the Most Surprising Moment, which occurred when two unlikely candidates dropped gloves on January 29th: the fiery, unexpectant Ryan Nugent-Hopkins and Sean Monahan fight! This incident also highlighted that Nuge can do anything — special teams’ specialist, key two-way player, snappy wrist shot, and now, a fighter.

The start of the 2019-20 season couldn’t have gone better for the Oilers. They won five games in a row and continued to prove that yes, “they were for real.” But they took a worrisome dive in December, going 5-8-1. Everything changed on Dec. 31 when a certain player donned an Oilers’ jersey for the first time that season.

The award for the Most Pivotal Moment goes to… when Ken Holland called up Kailer Yamamoto! The young winger gave the Oilers a solid second line, which granted Dave Tippett the chance to finally split up the Dynamic Duo.

How many fights can one include in a “best moments” article? Well, when you have a Battle of Alberta in the modern NHL that encompasses old school antics, you need to relive it.

The award for the Most Jump-Out-Of-Your-Seat Moment goes to… The goalie fight between Mike Smith and Cam Talbot. It was awesome. Need I say more? The fight embodied the 2019-20 Battle of Alberta perfectly.

For most of Leon Draisaitl’s career, several NHL fans have believed that No. 29 needs the Oilers’ captain by his side to succeed. But Edmonton fans have known for quite some time that Draisatil doesn’t need McDavid to be good.

At the start of the season, the talented German “became the first NHLer to score 25-plus points in October since Gretzky scored 29 for the Kings way back in 1993.” (from ‘Leon Draisaitl’s dominant October takes its place among the best in Edmonton Oilers’ history’, The Edmonton Journal – 2/11/19)

Despite Draisaitl’s strong start, people were still under the impression that McDavid was carrying him. Even when Yamamoto, Nugent-Hopkins, and No. 29 became a dominant second-line, people still refused to shake their belief that Draisaitl can only succeed with No. 97. But that all changed when the Oilers’ captain suffered an injury.

Which leads us to the award for the Best We-Told-You Moment:

When Draisaitl generated Hart Trophy talk during McDavid’s injury. While he recovered, Draisaitl was busy getting 12 points in 6 games. Numerous moments proved that he can play without McDavid, but this helped to cement the fact that he’s a force to be reckoned with.

Let’s just get right to it.

The award for the Most Memorable Game goes to… when the Oilers beat the Flames 8-3 in a very spirited Battle of Alberta. This old-school, feisty, high-scoring game provided entertainment from all angles. After 102 penalty minutes, a line brawl, a goalie fight, and 11 goals, the Oilers came out triumphant. If you plan on re-watching any game during the pause, this one needs to be it.

The Oilers have had a tremendous season so far. Hopefully, we will get to witness more memorable hockey moments sooner than later.

Today in Hockey History: July 3
Protocols set for NHL return in Edmonton, Toronto
Why the Chicago Blackhawks have no plans to change their name
Penguins sign Schilkey, Nastasiuk to AHL deals
10 lingering questions about the NHL return-to-play bubbles