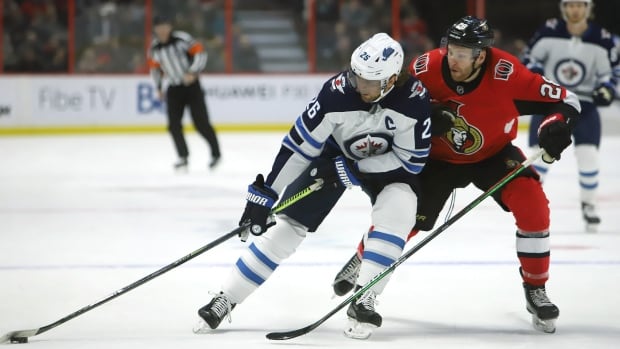 Kyle Connor and Nikolaj Ehlers also scored for the Jets (32-25-5), who improved to 7-2-1 over their last 10 to move into the first wild-card spot in the Western Conference.

Laurent Brossoit made 29 saves for his sixth win of the season.

Newly acquired Jets defenceman Dylan DeMelo faced his former teammates in his first game with Winnipeg. The Senators traded DeMelo to the Jets Tuesday night in exchange for a third-round pick.

Trailing 4-1, the Senators pushed back in the third, but were unable to find a way to beat Brossoit again.

Scheifele made it a hat trick as he scored his third power-play goal late in the period.

The Jets extended their lead early in the second as Connor won the battle for position in front of the net and jammed home a loose puck.

Winnipeg made it 4-1 just over a minute later as Ehlers beat Ron Hainsey to a rebound in front and put it past Hogberg.

Paul opened the scoring midway through the period with a wrist shot from the slot to give the Senators a 1-0 lead.

Scheifele then gave the Jets a 2-1 lead, scoring two power-play goals in a span of 1:11 to hit the 25-goal mark for the year.

Ottawa’s Drake Batherson was involved in his first NHL fight when he dropped the gloves with Winnipeg’s Jansen Harkins in the first period.