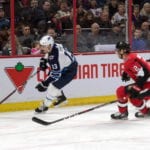 The Ottawa Senators have traded pending UFA defenseman Dylan DeMelo to the Winnipeg Jets for a 2020 third-round pick.

Scott Billeck: DeMelo said that he could see himself be a Jet beyond this season, but hasn’t thought too much about his future yet. Will play out the season and see how it goes.

Shawn Simpson: DeMelo’s agent Brian MacDonald that they never talked money or term with the Ottawa Senators. DeMelo had wanted to stay in Ottawa.

Murat Ates: (on if DeMelo could sign with the Jets) “Off-hand, I think it’s too soon to say. Those discussions won’t have begun yet but, assuming he’s a fit, an extension could turn this trade into quite the coup.”

Graeme Nichols: “The DeMelo trade just seems like weird asset management. Team is comfortable rolling with Leafs retreads who aren’t very good and they devalued DeMelo by sticking him with Boro for most of the year. (And it’ll likely be Boro who lands the contract extension.)”

Dan Rosen: “Rangers trade D Joey Keane to Carolina for F Julien Gauthier, 22, who has 26 goals in 44 games with Charlotte in the AHL this season. Gauthier is fourth in the AHL in goals. He was Carolina’s first-round pick (No. 21) in 2016.’

Dan Rosen: “The Rangers are trading from a position of strength here (defense prospects) to acquire a forward who eventually, possibly sooner rather than later, should get an opportunity in their lineup.”