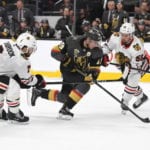 Kristen Shilton: Newly acquired Toronto Maple Leafs forward Denis Malgin said that he didn’t want to leave Florida and that he never asked the team to be traded.

Hurricanes looking for Top-four Dman, and are eyeing a Canadiens defenseman

TSN: Pierre LeBrun said that Carolina Hurricanes are looking for top-four right-handed defenseman that has term left on his deal.

A source for LeBrun thinks there is a 95 percent chance that the Canadiens retain Petry.

Would a package of a first-round pick and prospect Jake Bean be enough for Petry? thinks that the Canadiens don’t view Bean as a top-four and would decline.

Could the Golden Knights use another defenseman?

“That’s why we worked really hard to finalize and determine what the price was going to be at the deadline. We’ll do a reset now, and then we’ll work right to the deadline on Monday to see if there are any other moves out there that could help us, that make sense.”

Martinez is more along the lines of stay-at-home defenseman and they could still potentially use another puck mover. wonders about Chicago Blackhawks pending UFA defenseman in Erik Gustafsson. They might be able to get him at a reasonable price.

Gustafsson is unlikely to re-sign with the Blackhawks, and though he’s not producing at the same pace this season, he did put up 60 points last year. He has 26 points in 58 games this year.

1. Gustafsson provides an instant offensive boost to the blue line
2. The asking price should be reasonable – a deal based around a 2nd round pick?
3. Gustafsson’s extremely low cap hit – $1.2 million or #296,774 prorated.
4. He fits nicely into the lineup – 3rd pairing with Holden?