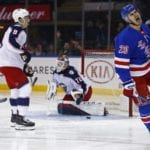 Pierre LeBrun: “Sense is Kreider contract talks haven’t produced a path yet… Still very much in play trade-wise. But I would also say normally in these situations each side would show their true hand about 2-3 days before the deadline contract-wise.”

Larry Brooks of the New York Post: The New York Rangers and Chris Kreider‘s camp are talking contract extension for the past week. It’s likely 50-50 that he re-signs with the team.

“It is not affecting my focus or my play,” Kreider, held off the scoresheet but who recorded four shots on eight attempts in 20:21, told The Post. “It has not been a distraction. That’s why I have an agent.”

It’s not known if they are making progress on contract talks. It’s believed the Rangers would go six years but at maybe less than $7 million. They’d likely get a first-round pick and a prospect for Kreider if they traded him, but their priority is to extend him.

Would a six-year deal at $6.85 million per work? There is also the negotiation over no-trade and no-movement clauses.

The Columbus Blue Jackets scouted the Rangers yesterday and they could use someone like Kreider. The Blue Jackets could offer up Josh Anderson.

Harman Dayal of The Athletic: An ideal acquisition for the Vancouver Canucks may be to find a winger to play with Bo Horvat, but the biggest area they should look to improve on is the blue line.