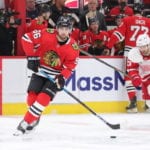 “I think we all know the situation,” Frans Nielsen said after Saturday’s loss to the Boston Bruins. “We know anything can happen. We’ve seen from early this year that he isn’t afraid to pull the trigger if there’s a trade to be made. We are all aware of the situation.”

Players who the Red Wings could move by next Monday include Andreas Athanasiou, Luke Glendening, Darren Helm, Mike Green, and Jonathan Bernier.

They could see if there a market for Nielsen, Justin Abdelkader, Valtteri Filppula or Trevor Daley.

The trade value isn’t the greatest for many Wings players.

Buying and selling options for the Chicago Blackhawks

Ben Pope of the Chicago Sun-Times: Chicago Blackhawks GM Stan Bowman remains committed to his core players. They are unlikely to go into a fire sale if they fall out of contention this week.

Defenseman Erik Gustafsson is the most likely player to be traded. He’s a pending UFA and they likely wouldn’t be able to fit his next salary in. There have been no contract talks. They might be able to get a second-round pick or a solid prospect for him.

Forward Drake Caggiula‘s value to the team may be more than his trade value.

It would take a big offer for the Blackhawks to trade forward Brandon Saad.

Prospects Dylan Sikura and Anton Wedin might prefer a change of scenery.

The Blackhawks have some salary cap space to work with for this season, but not much for next year.

If they look to add, rental options on the blue line include Sami Vatanen, Brenden Dillon, Dylan DeMelo, Ron Hainsey, and Mark Borowiecki.

Forward options could include Mike Hoffman, Mikael Backlund, Chris Kreider, Tyler Toffoli, and Jean-Gabriel Pageau. The price to acquire may be too high for some.

Taking on a bad contract along with a draft pick sweetener could be an option. Toronto Maple Leafs defenseman Cody Ceci is one example.