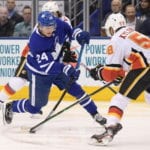 From ‘not going anywhere’ to ‘more likely to move’ – Edmonton Oilers

Sportsnet: The Edmonton Oilers have just over a week to decide what route to take for the NHL trade deadline. Are they contender and look to add? Do they want to shake things up?

A look at trade tiers for the Oilers.

Could be on the move – Jujhar Khaira and Markus Granlund.

From ‘not going anywhere’ to ‘more likely to move’ – Calgary Flames

Sportsnet: The Calgary Flames are still in the playoff hunt, but need to get a roll. They could be looking to buy, and they have some salary cap space to work with.

They could be active on the trade market ahead of the deadline. Looking at the trade tiers for the Flames.

Could be on the move – Oliver Kylington and Sam Bennett.

Sportsnet: Some injuries to the Toronto Maple Leafs forward and defensive group complicates things a bit for GM Kyle Dubas. The LTIR will give them some needed salary cap space to add if they want.

Could be on the move – Dmytro Timashov and Cody Ceci.