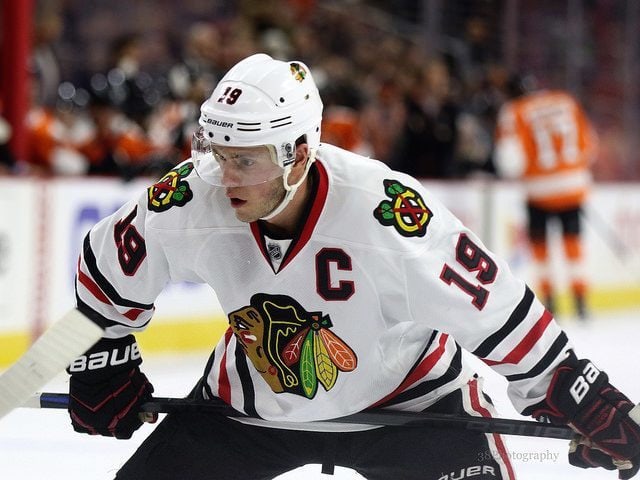 It’s safe to
say this recent five-game road trip was pretty important for the Chicago Blackhawks.
They were already on the outside looking in, but were still on the cusp of a
wildcard spot if they went on a roll.

They only secured one win and earned a mere two out of a possible 10 points. The frustrating part is they played some solid hockey, but just couldn’t consistently put it all together.

What more
can one do as a Blackhawks’ fan but shake your head and brace for another long
summer? It’s your team after all, and you want to see a little good to balance
out the bad. Here’s some good and bad from each game on this recent road trip,
and we also look towards what the remainder of the season holds.

Seeler earned his stripes with a fight, an undeserved penalty, two hits and two blocked shots in 15:19 minutes of ice time; 1:32 of which was spent on the penalty kill. He showed he could be a viable defensive option for the Blackhawks if needed.

Rookie Kirby
Dach was given some more responsibility at the faceoff circle. He took nine draws
and actually won five of them for a 56% success rate, marking his best
performance of the season in that area.

The turning point of this game came when Alex DeBrincat committed an ugly turnover on a Blackhawks’ power play, and the Jets scored a short-handed goal. It gave them the spark to turn things around, and they went on to score five unanswered goals for the win.

Some questionable calls against the Blackhawks by the referees didn’t help either. The Jets had six power play opportunities, although they only capitalized on one of them.

After letting in a goal early, the Blackhawks got to work. The usual suspects of Saad and Toews were the culprits, and Toews’ goal was even sweeter in that it was a shorthanded tally.

Defenseman Adam Boqvist returned to the lineup after missing the previous game with a shoulder injury, and he added a lovely tally of his own. With a little help from Patrick Kane, of course.

Head coach Jeremy Colliton finally made some adjustments on the power play, moving Kubalik up to the first unit. He was surprisingly joined by Zack Smith to be a net front presence. Kubalik showed promise with his new assignment, credited with four shots on the man advantage.

Headed into the third period down 4-3, the Blackhawks dominated play with 18 shots to the Oilers’ five but unfortunately they were unable to get the equalizer. The Oilers put the game away with an empty netter.

Toews was called for a tripping penalty in the first period. But upon replay, it was obvious the Oilers’ player clearly tripped over the linesman instead. The call was not reversed, and the Oilers scored on the ensuing power play.

Dylan Strome was a healthy scratch in Edmonton. Colliton said he felt Strome had more to give and wanted to provide him feedback. While this isn’t necessarily a bad thing, Alex Nylander took Strome’s place and didn’t do much with the opportunity in just 7:52 minutes of ice time. In hindsight, this could have been a disadvantage for the Blackhawks in the loss.

While the Blackhawks were unable to capitalize on three tries with their new-look power play, the Oilers scored twice on their three chances, which made quite a difference in the game.

The Blackhawks had 49! shots on goal which was a season high. They also held the Canucks to 20 shots on goal, which was also a season best. They played a complete 60-minute game and did a lot of things right. Kane finished the night with eight shots on goal, Kubalik with seven, and Toews with five. Sounds like the kind of things wins are made of, right?

The Blackhawks lost this matchup 3-0. We’ll get to more of the bad below.

But while it might be easy to show frustration after a night like that, here was Colliton’s message afterward.

Colliton: “We were skating really well, we won a lot of 50-50s, we were pretty clean with the puck, had a shooter’s mentality, we were going to the net… If we can find away to string together a bunch of performances like that, there’s lots of points left and we can get them.”

Time to
regroup and move on.

The Blackhawks were dealt their first blow when they challenged a disallowed goal by Saad. The call on the ice was goalie interference, and the coaches argued he was pushed into goaltender Jacob Markstrom.

They didn’t get the call, and according to the rules, were therefore hit with a delay of game penalty as a consequence for the failed challenge. The Canucks scored on the ensuing power play and never looked back.

Despite
the adjusted power play units and 10 shots on the man advantage, the Blackhawks
went 0-for-5 on the power play.

Smith got his hand cut by a skate blade in this contest, and it was announced the following day he would be out for 7-10 days. While not a big scorer, Smith is a veteran depth player whose presence will be missed from the lineup.

Finally, one has to credit Markstrom, who stood on his head all night and didn’t allow one Blackhawks’ goal.

I guess the hockey gods really do balance things out, because 49 shots and zero goals from the Canucks’ contest turned into eight goals (a new season high) on only 28 shots in this one. And the Flames recorded a whopping 42 shots, yet still lost the game.

Toews, Kubalik and Saad scored, and Kane tallied an empty netter. No surprise there, huh? But hey, Nylander scored twice! DeBrincat notched a five-on-five goal even though his bread and butter has been scoring on the power play this season. And Dach hit the back of the net as well. All three players have been in scoring slumps. Once it was all said and done, the Blackhawks had goal contributions from all four lines. Toews and Kane both had a three-point night, which is always a good indicator of a win.

Strome has been a bit quiet lately, but he had a good night on Saturday in Calgary. He earned the primary assist on DeBrincat’s goal and was credited with two takeaways. He even went 6-of-10 in the faceoff circle, for 60%. When Strome was scratched for the Oilers game, he was tasked by the coaching staff to be more aggressive. Said Strome,

I’m not necessarily a guy that hits guys a lot, but nothing wrong with rubbing a guy out. Little things like that, where it helps in the long run. Maybe the next time the [defenseman] gets the puck, he’s thinking, ‘This guy might finish a check,’ and might turn it over. That’s what I watched with [the coaches]. (from ‘Blackhawks’ Dylan Strome responding from message-sending scratch with more aggressive play’, The Chicago Sun-Times – 2/16/20)

Many
have been calling for Saad, one of the most consistent players on the team this
season, to be inserted on the power play. Colliton has utilized him on the
second power play unit in the past, although sparingly. But for this contest Saad
finally got his shot on the top unit. In 3:36 minutes of time on the man
advantage, Saad recorded two of the Blackhawks’ total five shots on goal. Which
leads me to the next section.

The Blackhawks once again did not score on the power play, although they had three chances. This made them 0-for-14 in their last four games, and 1-for-24 in the month of February.

This wasn’t Boqvist’s best game. He was out of position for two of the Flames’ four goals.

Other than that, not much to complain about in this blowout win.

The Blackhawks
played their hearts out in this loss. Not only were they on the second half of
back-to-back games, but they didn’t get into Winnipeg until after three in the
morning, and then had to turn around and play another game just a few hours
later. They were facing a well-rested and talented team that plays a heavy game.
It was a tall order. And they almost pulled it off.

They came out strong and got the first score from the hard-working Ryan Carpenter, who has recently been promoted back up to the second line center. Then Kane tied things up with a beauty of a goal in the second frame. Unfortunately, they couldn’t get the equalizer in the end, giving them their fourth loss of the road trip.

I feel
like my good section isn’t so good as much as it’s bittersweet, so let’s move
on to the bad.

All three
of the Jets’ goals were scored off deflections, which is the hardest for a
goaltender to stop. One of those redirects was even off a Blackhawk stick
(DeBrincat’s stick on the game-winning goal). It was an unfortunate series of events,
and representative of how things have gone on this road trip, and this season
in general.

Defenseman Seeler drew into the lineup for his second game as a Blackhawk, as Colliton gave Boqvist the night off after a middling performance against the Flames. Seeler was on the ice for two goals against, and the rest of his numbers weren’t all that hot either. Could Boqvist have made a difference or even just made it easier on the rest of the blue line with his more familiar presence? We will never know.

Overall Analysis from the Road Trip

The
Blackhawks are now 26-25-8 on the season with 60 points. This puts them six
points out of a wildcard spot with four teams ahead of them. This trip was a
chance to move up in that mix, and it’s another opportunity squandered.

23 games remain, but there are only three more contests before the trade deadline on Feb. 23. This road trip was the players’ chance to prove to general manager Stan Bowman they could make a run for the playoffs with perhaps some reinforcements. But that’s all but over now. Bowman has little choice but to sell, or at least stand pat if he doesn’t find the right situation.

But you better believe teams are going to be calling for defenseman Erik Gustafsson. And goaltenders Robin Lehner and Corey Crawford. Or one of the forwards we’ve become so accustomed to having in the lineup. Like with Ryan Hartman in 2018, Bowman could run into an opportunity he can’t pass up. Get ready for the team to take another blow to their already fragile ego. And brace for another long summer.

Related – When Do the Blackhawks Consider Trading Gustafsson?

Heck, you never know. The Blackhawks could still go on a run and there technically is still time. But the odds are certainly against them. The road trip was a crushing blow that will be hard to bounce back from. Time is running out.