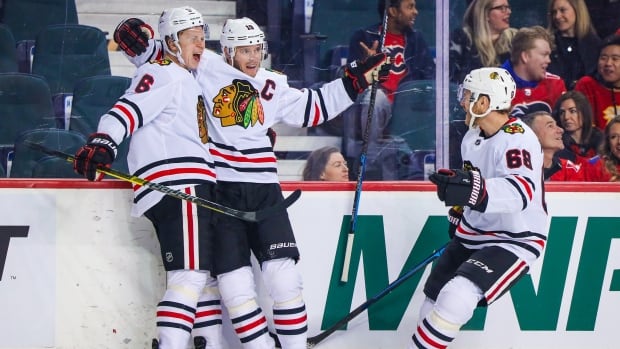 Alex Nylander had a pair of goals, and the Chicago Blackhawks snapped a five-game winless skid on Saturday night with an 8-4 victory over the Calgary Flames.

After entering the night with two goals in his previous 34 games, Nylander scored twice in the second period as Chicago took advantage of several defensive miscues to outscore the Flames 4-1 in the middle stanza, despite being outshot 14-7.

Sam Bennett and Elias Lindholm had two goals apiece for Calgary (30-24-6). The Flames home-ice woes continue as they are now winless in their last five games at the Scotiabank Saddledome.

After Saad broke a 2-2 tie at 4:24, Nylander gave the visitors their first two-goal lead just over a minute later, pouncing on a bad giveaway in front by Dillon Dube and beating David Rittich with a move to his backhand.

Alexander Nylander scored twice as the Chicago Blackhawks offence erupted in an 8-4 win over the Calgary Flames. 0:50

With Cam Talbot on in relief, Nylander made it 6-3 at 18:14. The second of two Chicago goals in 27 seconds, another Flames turnover behind the net led to rookie Matthew Highmore setting up Nylander in the slot.

The Flames entered the night in the first wild-card spot in the Western Conference. While they still have other teams to pass, Chicago pulled within six points of the Flames with two games in hand.

Despite Talbot coming off a 44-save shutout on Thursday in Anaheim, interim head coach Geoff Ward started Rittich, who gave up a goal 30 seconds in when Toews skated down the wing and put a slapshot over his shoulder.

After Bennett tied it less than two minutes later, Chicago re-took the lead at 9:17.

In what would be a theme to the evening for the home side, a turnover behind the net — this one by Michael Stone — allowed Toews to set up Kubalik for a one-timer, the goal coming just after a power play expired.

With NCAA alums Cale Makar and Quinn Hughes battling it out for the Calder Trophy, Rob Pizzo looks at 9 other players who chose a career path south of the border. 2:22

Bennett’s breakaway goal at 12:57 tied it once again, but that’s the last time the game would be even with Chicago taking advantage of the Flames’ poor defensive play to pull away in the second period.

Calgary continues to be without its top two defenceman in Mark Giordano (hamstring) and Travis Hamonic (upper body), who remain out indefinitely.

Robin Lehner turned aside 38 shots for the victory to improve to 16-9-5.

Ottawa Senators announce temporary layoffs, salary reductions due to COVID-19
Canucks Top 5 Prospects Not in Utica
Maple Leafs’ Morgan Rielly pondering team’s inconsistencies during self-isolation period
Vegas coach Peter DeBoer on the NHL’s coronavirus pause, and coaching a team that hated him
The feel-good stories of the season for all 31 NHL teams