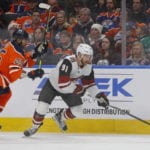 Cap issues led to a short-term deal for Darnell Nurse

Jason (@Account4Hockey): Elliotte Friedman on Sportsnet 960 on Monday said that the Edmonton Oilers and Darnell Nurse had looked at longer-term but couldn’t get the salary cap number to work.

The short-term deal gives them time for money to come off the books and then they would be able to extend him to a long-term deal. Nurse wants to be in Edmonton.

Jason (@Account4Hockey): Elliotte Friedman on Sportsnet 590 said that there have been mixed reviews on Los Angeles Kings forward Tyler Toffoli.

There have been some talks of him potentially staying with the Kings but it’s more likely that he gets traded.

The Kings will likely get a 2nd or 3rd round pick and a prospect for him.

John Hoven: Don’t see Kings moving any player that would be able to bring them back a first-round pick.

It may not be impossible, but they would have to get creative to make it happen.

Jason (@Account4Hockey): Elliotte Friedman on Sportsnet 590 said that Ottawa Senators are waiting late to start contract extension talks with Jean-Gabriel Pageau. The Sens will try to sign him but he’d likely be able to get more on the open market.

TSN: Pierre LeBrun said last night that the Arizona Coyotes are not interested in trading forward Taylor Hall if they fall out of the playoff race. They would like to extend him if possible.

“I understand why people are asking the question; after all he may walk out of the door July 1st and get nothing in return, but the reality is owner Alex Meruelo, GM John Chayka and Taylor Hall‘s agent Darren Ferris all sat down for dinner Sunday night in Montreal. They’re all on the same page as to where this is headed right now which is we’ll talk after the season. Meruelo really wants to sign Taylor Hall.”

The Coyotes are the only team that would be able to offer him an eight-year contract.