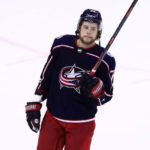 Is Josh Anderson a case of buyer beware?

Conor Ryan of Boston Sports Journal:  While Anderson dishes out much punishment, his scoring this season has evaporated. He tallied just one goal and four points in 26 games before an injury occurred. Anderson remains out since mid-December. While he expects to return soon, one must wonder what happened this year.

Is it enough reason to steer clear from Josh Anderson? Red flags litter the landscape here. Anderson’s tendency to fight too much contributed to his current malady. However, he struggled offensively well before that.

The question begs to ask itself. Can Anderson bounce back? That answer is yes. He will be 26 next season on the last year of his RFA deal. This season getting written off as a lost year is almost a foregone conclusion. On the other hand, a slight chance exists that Anderson does not get it together this season or next.

Joe Haggerty of NBC Sports Boston:  Spanning through the league reveals some interesting tidbits. Teams like Arizona and Vegas enjoy little cap space to make any deals unless it is salary for salary. A team like Anaheim can take on bad contracts but have little to offer back.

Boston, Colorado, and St. Louis need a forward like Chris Kreider but Tyler Toffoli among others could cost less.  Going up and down the buyers and sellers illustrates the supply and demand well.

Calgary acquiring a top-six winger is a common theme as several teams could use one. Chicago expects to trade Brandon Saad and Erik Gustafsson. The New York Rangers ponder life without Chris Kreider. There is a New York Islanders team looking for a middle-six pivot. Jean-Gabriel Pageau from Ottawa stays as a big trade commodity if Ottawa has him on the market.

Edmonton and Florida remain teams that can dive in albeit very lightly. Minnesota made one move trading Jason Zucker but after that is a question mark. Does Montreal stand pat or the Rangers for that matter? New Jersey has Wayne Simmonds on the block but after that, Sami Vatanen or Damon Severson perhaps is available. Kyle Palmieri appears safe.

Pittsburgh made one move for Zucker and is not done yet. Tampa has enough pieces to make one move for a defenseman and Washington does as well. Toronto is a wildcard here.