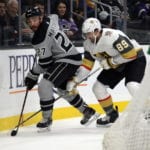 Sportsnet: Teams are keeping an eye on the Los Angeles Kings who are going to be sellers ahead of the NHL trade deadline. At the Kings-Devils game:

“There are three scouts there from each of the Winnipeg Jets and also the Vegas Golden Knights,” Sportsnet’s Chris Johnston reported during the Headlines segment on Hockey Night in Canada. “We believe that those two teams are among the teams interested in Alec Martinez. Also Tyler Toffoli is getting a lot of interest. I think Pittsburgh is a team that would like to get in on him, maybe the Calgary Flames among others.”

Martinez has a year left on his contract at a $4 million salary cap hit. Toffoli is a pending UFA.

The New York Rangers and Chris Kreider‘s camp are going to start contract extension talks to see if there is any traction before the deadline according to Chris Johnston.

Ottawa Senators forward Jean-Gabriel Pageau is another forward who could be on the move. There haven’t been any talks according to Johnston.

“It doesn’t sound like that has happened with Ottawa and Jean-Gabriel Pageau, that there hasn’t been any real negotiations, any talk about where they’re at. And so obviously, those situations loom large with the deadline a little bit more than two weeks away.”

Jordan Hall of NBC Sports Philadelphia: The Philadelphia Flyers are willing to make a move now, but won’t be mortgaging their future just to get in the playoffs.

“I don’t think we need to mortgage the future to try to get into the playoffs this year,” Fletcher said Wednesday in an interview with NBC Sports Philadelphia’s Taryn Hatcher. “I think our team is more than capable of getting into the playoffs with what we have, but if we can find a way to improve our team for this season and going forward, we’ll definitely not be hesitant to make a move right now.”