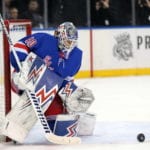 Scouting the Winnipeg Jets and Ottawa Senators this afternoon

Scott Billeck: Scouts listed to attend this afternoon’s Jets and Senators game. The Colorado Avalanche and Toronto Maple Leafs had a pro scout, while the Tampa Bay Lightning had their director of player personnel.

Coyotes fitness testing when they shouldn’t have?

Darren Dreger: Sources are saying that there are believed to be 20 incidents where the Arizona Coyotes where giving fitness tests to draft-eligible players. Bill Daly and NHL are now handling the case.

Adam Herman: “I get I’m not Bob McKenzie, but the circumstantial evidence is overwhelming. They’re forcing an awkward three-goalie rotation. The trade price of Georgiev is obscene. What’s more likely: Gorton & Davidson have lost their minds? Or they see Georgiev on the 2020-2021 roster?”