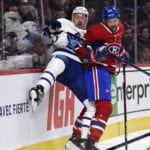 16 trade targets for the Maple Leafs

Jonas Seigel and James Mirtle of The Athletic: Looking at 16 potential trade targets for the Toronto Maple Leafs.

1. Jeff Petry – Canadiens – one-year left at $5.5 million. Acquisition cost would be high for the Canadiens to trade him to their division rival.

3. Adam Larsson and Jesse Puljujarvi – Oilers – one-year for Larsson at $4.166 million and RFA for Puljujarvi. Kapanen and other assets going to Edmonton.

5. P.K. Subban – Devils – two years left at $9 million. The Devils may have to retain 50 percent of the deal, and how much extra would that then require the Leafs to pay.

6. Sami Vatanen – Devils – UFA – The Leafs may not want to go the rental route, but if the non-rental cost is too high, Vatanen could be their best option.

9. Alexandar Georgiev – Rangers – RFA – Leafs have already checked and shouldn’t be interested in the Rangers want Kapanen or Anders Johnsson.

11. Robin Lehner – Blackhawks – pending UFA with a current $5 million cap hit. Blackhawks would have to become sellers and retain salary.

13. Sam Bennett – Flames – one-year left at $2.55 million. Leaf scouts have been watching the Flames and they’ve been intrigued for a while now.

14. Ryan Miller – Ducks – pending UFA at $1.125 million. Could the Leafs include Miller in a deal for Manson? Miller has a six-team trade list and may not want to leave California.

Alexandar Georgiev – Rangers – the asking price is high at the moment.

Corey Crawford or Robin Lehner – Blackhawks – Blackhawks may be buyers and not sellers. Not really a realistic option unless Frederik Andersen goes on the LTIR.

Craig Anderson – Senators – a pending UFA with a $4.75 million cap hit with a 10-team trade list.

Ryan Miller – Ducks – Miller has a six-team trade list and may not want to leave his family.