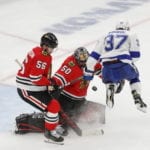 Emily Kaplan of ESPN: If the Chicago Blackhawks are in a good position at the trade deadline, don’t expect them to do much. GM Stan Bowman would likely hold onto both Robin Lehner and Corey Crawford. Bowman could listen to offers on Erik Gustafsson. If they fall out of the race, there could be some coaching and/or management changes this offseason.

The Pittsburgh Penguins would ideally add a forward to replace Jake Guentzel and to find someone to take Alex Galchenyuk.

It’s sounding like there are many teams that are looking to add players that have term left on their deals. Rental players aren’t as attractive to teams this year and it could be a quiet trade deadline day.

Chris Kreider and Ilya Kovalchuk could be two of the top rental players and they could easily remain with their current teams.

Could the Senators be asking too much for pending UFA Jean-Gabriel Pageau?

The New York Rangers might be able to get more for goaltender Alexandar Georgiev if they wait until the draft.

Chris Stevenson of The Athletic: Ottawa Senators GM Pierre Dorion has been in Europe scouting, so there hasn’t really been any recent news on contract talks with pending free agents Mark Borowiecki, Jean-Gabriel Pageau or Dylan DeMelo. Recently when on TSN 1200, Dorion did say “you can do contracts fairly quickly.”

What would offer the three:

They could likely get more money on the open market, so it’s possible that all three could be moved.

Should the Canadiens hold on to Kovalchuk?

Marc Dumont of The Athletic: Brendan Gallagher‘s return to the lineup has moved Ilya Kovalchuk down the lineup but his value is still there. The Canadiens could trade him at the deadline, but they may wise to keep him and possibly re-sign him to help them compete for a playoff spot next season as well.

The Canadiens lack pure shooting talent, something Kovalchuk has. He’d also likely bring more value to the team in one season than any 4th round draft pick would.