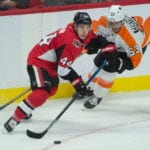 Pierre LeBrun of The Athletic: More teams are looking at a make the playoffs for longer-run as opposed to trying to go “all-in” for two or three years – wanting to hold on to picks and high prospects instead of trying to win now.

Teams are becoming more reluctant to give up first-round picks for rentals. Jean-Gabriel Pageau is the top pending UFA center that could be had now. Will a team give up a first for him? If so, that would give the Ottawa Senators three first-round picks and three second-round picks in the 2020 draft.

“Many teams seem to be unwilling to use their first in rentals,” said one team exec. “I’d imagine they would have a tough time getting a first.”

The Edmonton Oilers don’t want to trade their first-round pick. Could they offer a conditional first if they make it to the Western Conference finals?

New York Islanders – They may prefer to trade for a center with term.

Dallas Stars – They already don’t have their second and third-round picks. Could offer their 2021 first or prospects.

Philadelphia Flyers – They are not in a playoff position at the moment, so they may put conditions if they were to offer a first.

Calgary Flames – Are looking for a right-handed top-six/nine forward, but may prefer a winger. Could the Senators try for Sam Bennett for Pageau and another piece or two.

The Tampa Bay Lightning and Carolina Hurricanes own two first-round picks this year and will be buyers at the deadline. The Hurricanes may be more interested in moving one of their two second-round picks as opposed to a first. The Lightning maybe after a top-four right-handed defenseman with term. could see them using a first for a player with term but not a rental.