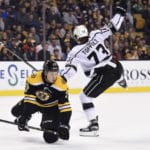 Coming out of the 2020 NHL All-Star break, the Boston Bruins are among this season’s top teams. With 70 points, they’re first in the Atlantic Division and second in the overall standings behind the Washington Capitals.

General manager Don Sweeney has a recent history of making big moves near the trade deadline. He brought in winger Rick Nash in 2018, and last season acquired Coyle and Marcus Johansson. Here’s a look at several players he could pursue in the run-up to deadline day.

The best forward in this summer’s unrestricted free agent pool, the 6’3”, 217-pound left wing’s size, speed, and offensive skills would be a good fit on the Bruins’ second line. Acquiring him, however, would mean moving DeBrusk down to the third line. They’re thinner at right wing than on the left side. The Rangers, however, aren’t in a rush to put the 28-year-old Kreider on the trade block. The asking price could include a good, young forward and either a quality draft pick or prospect.

Another pending UFA, the 27-year-old Toffoli is a versatile, two-way forward who can skate at center or right wing. The 6′, 197-pounder is a former Stanley Cup champion who knows what it takes to win a championship. Toffoli would provide a boost to the Bruins’ offense and their penalty-killing. The rebuilding Kings could seek a first-round pick or a top prospect as part of the return.

If Sweeney prefers a player signed beyond this season, Palmieri could be a perfect fit. The swift-skating 28-year-old forward is an energetic forechecker with solid offensive skills who can play either wing. Cap Friendly indicates he carries a reasonable $4.65-million annual average salary through 2020-21. He also has an eight-team no-trade list. Perhaps he’d be agreeable to joining a Cup contender if the Devils go into sell mode by the deadline.

Another speedy two-way winger, Zucker had a career-high of 33 goals and 64 points in 2017-18. He could reach those numbers again on a deeper roster like the Bruins. He’s more expensive than Palmieri ($5.5 million AAV) and signed through 2022-23 with a 10-team no-trade clause. Sweeney has dealt with the Wild before, acquiring Coyle from them last season. Maybe he’ll try his luck again.

Pageau is enjoying a career-best performance in his contract year. With 19 goals and 31 points in 47 games, he could reach 30 goals and 50 points for the first time. Like Kreider and Toffoli, he becomes a UFA this summer. Pageau can play center or wing and is solid defensively, but is best-suited for third-line duty.

The Predators could become sellers by the trade deadline if they don’t gain ground in the Western Conference standings. Granlund, 27, could become available. A skilled playmaker and former 60-point winger with the Wild, he’s struggled offensively since joining the Predators midway through last season. Perhaps he can regain his touch with a deeper roster.

Considered washed-up when his contract was terminated last month by the Kings, the 36-year-old left wing has regained his scoring form with the struggling Canadiens. With eight points in nine games since joining the Habs, Kovalchuk could become a trade candidate. He’s seeing top-line minutes in Montreal but won’t get those in Boston. Perhaps he could find some second-line chemistry with David Krejci.