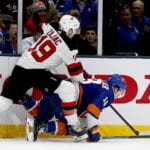 Toffoli’s return is key for the Kings

Dennis Bernstein: (answering questions) The success of the Los Angeles Kings deadline comes down to what return they get for Tyler Toffoli.

Their other pending unrestricted free agents won’t get them a big return – a low round or conditional draft pick.

There may be a concern right now about the lack of interest.

For specific areas of the need, the best trade option is…

Rob Reese of NHL.com: If a team is looking for….

Backup goalie – New York Rangers Alexandar Georgiev – Is a pending RFA and a team looking for added depth could be interested.

Shutdown defenseman – San Jose Sharks Brenden Dillon – Pending UFA who leads the Sharks in hits with 155 and averages over 19 minutes a game.

Face-off specialist – Ottawa Senators Jean-Gabriel Pageau – On pace for 54 points. 52.9 percent on the draw on the season and is a pending UFA.

“Lou Lamoriello drafted him. When Lamoriello was in Toronto, I kept on hearing he was trying to get Zajac to come to Toronto. He loves him some Travis Zajac. Zajac said no .”

He may have seemed like a throw-in, in the Erik Karlsson trade, but he’s played well. Senators GM Pierre Dorion may look to keep him.

“But the trade interest is that extreme, the goal of the Sens is still very much in rebuild mode. They’ve got 11 draft picks in June. They’d like to have 15 or more. Dylan DeMelo would fetch a decent return, but man, he has been good for the Ottawa Senators.”