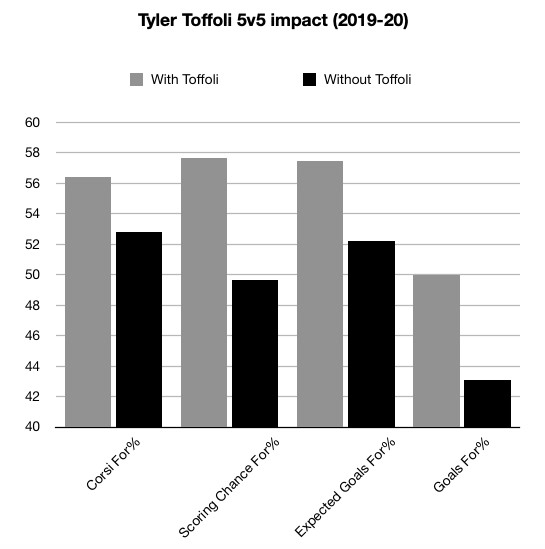 The NHL trade deadline is just over a month away.

That means we will soon see a flurry of activity from general managers trying to bolster their clubs in hopes of an extended playoff run.

There are already a ton of names regularly popping up in rumors. Today, we’re going to look at three that GMs should be prioritizing.

The 27-year-old is quietly putting together an impressive bounce-back season with the Los Angeles Kings.

Toffoli mustered up just 13 goals and 34 points a season ago. He’s yet to play his 50th game of the season and is already close to matching those outputs, having already netted 12 markers and recorded 27 points.

Those numbers don’t pop off the page but they are solid. What’s really encouraging, though, is that a lot of the production has come at 5v5.

Toffoli has registered 20 of his 27 points in that game state. It may not sound like an impressive number but, well, it is.

He’s not an empty calorie scorer either. His on-ice impact is strong across the board. Whether you’re looking at Los Angeles’ share of shots, chances or expected goals, it’s higher – in some cases significantly – with Toffoli on the ice than without.

Unsurprisingly, that shows up on the scoreboard as the NHL’s 30th placed team is on level-pegging with opponents when Toffoli is on the ice.

Toffoli gets results and the underlying numbers suggest it’s no fluke. Any team looking to boost it’s top-6 should be all over Toffoli, especially if the rumored asking price – a 2nd round pick and a prospect – is accurate. He’s worth it.

Kreider is going to be in high demand leading up to the trade deadline and understandably so.

The 6’3’, 220-pound winger can absolutely fly and has a long track record of scoring goals at an above-average clip.

This is Kreider’s 7th season as a full-timer in the NHL. The lowest goal pace he’s scored at over an 82-game schedule is 21.

Now in the prime of his career, we should not be surprised Kreider’s taken his goal-scoring prowess up a notch over the last year and change.

Like Toffoli, Kreider has been able to do a lot of his damage at full-strength.

Kreider is tied for 36th in 5v5 goals dating back to the start of 18-19, ahead of snipers like Evander Kane, Brock Boeser, Jonathan Marchessault, Tyler Seguin, and Patrik Laine.

Come playoff time, when it’s best on best, there really isn’t much separating teams. Refs tend to put whistles away, too, so having another quality scorer – one who won’t shy away from the added physicality, at that – at your disposal is extremely valuable.

Dillon is a big, strong, physical defender with loads of playoff experience. He’s exactly the type of player GMs fall on their faces for every single trade deadline.

The difference between Dillon and many of his archetype: he’s good.

Often times the physical ‘defensive defenseman’ teams fawn over is somebody who spends the vast majority of time chasing play in his own zone and bleeding shots/chances in the process. Not Dillon.

He is actually good at slowing down opposing offenses. Very good, in fact.

Nine defensemen have logged at least 500 minutes of ice (5v5) for the Sharks over the last 1.5 seasons. Among them, Dillon ranks 1st or 2nd in essentially every key defensive metric.

His numbers are also fantastic on the PK, where he has done a better job of suppressing shots, chances, and goals than any other blueliner on the Sharks.

Dillon is excellent defensively in all game states, he’s physical – just 18 defenders have thrown more hits/60 since the start of last season – and he can chip in once in a while offensively, as evidenced by consecutive 22-point campaigns.

If I’m a contending team looking to shore up my blueline, Dillon is certainly of interest.